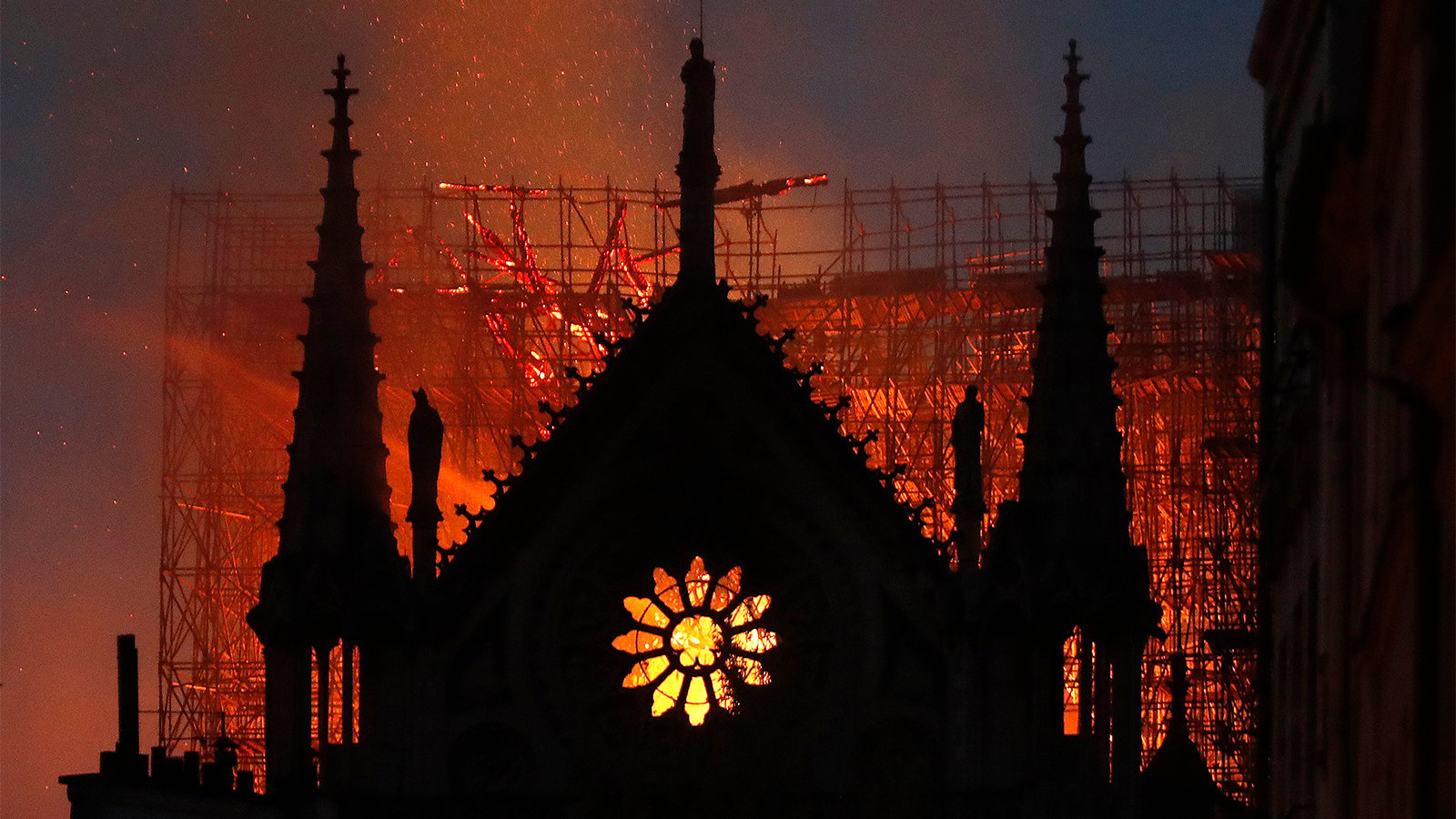 Flames and smoke rise from Notre Dame Cathedral as it burns in Paris on April 15, 2019. (AP Photo/Thibault Camus)
May 3, 2019
bob smietana

(RNS) — On Easter Sunday, Rev. Carl Johnson told his Lutheran congregation that he wanted to confess his sins.

In particular: his wish that Muslims — who he fears will take over France — would be expelled from France in the wake of the Notre Dame fire.

Johnson’s comments put him and the church in the spotlight after his comments came to the attention of the news media.

Now he says the congregation misunderstood what he wanted to say.

“I’m really sad about that. Obviously, that wasn’t my intention in any way, shape or form,” said Johnson.

Johnson, pastor of St. John’s Lutheran Church in Kittanning, a small town in northwest Pennsylvania, told his congregation that when he heard the news about the Cathedral burning, he immediately thought of the terrorists who had plotted to blow it up in 2016.

“It is the symbol of Christian unity in France," he said.

The fire at the French Cathedral is believed to have been started by accident. Johnson admitted that in his comments on Easter. But he said that initially he was disappointed by the news.

“I was hoping it was Muslim terrorism so that, hopefully, there would be a violent purge of Muslims from France. I wanted that because France is lost,” said Johnson. 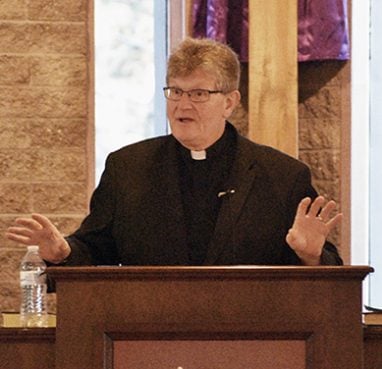 After some comments on the difference between the general French birth rate and that of Muslims, Johnson told his congregation that he believed Islam would soon be the majority religion in France.

“It’s going to take a generation, maybe two, before France is Muslim, and there’s no stopping it,” he said.

Approximately 9 percent of the French population in 2017 was Muslim, according to the Pew Research Center, though that percentage is expected to grow.

He told the congregation he hoped a violent response by France to a terrorist act would stop that trend. But he admitted that hope could lead to disaster.

“I thought this could be it, we will fight evil with evil, we will fight fire with fire. There’s a problem with that, is that evil can only beget evil,” he told his congregation.

Since his hopes about the fire were dashed, Johnson said he took comfort in his faith on Christianity’s holiest of days.

“So it is that I need Jesus. I need to hear 'Alleluia, Christ is risen. He is risen indeed. Alleluia,'” to an answering chorus from the congregation.

In a phone call to Johnson seeking explanation, he said he believes that French Muslims want to turn their country into a Muslim nation.

Johnson said his comments on Muslims had been completely misinterpreted.

“I was trying to compare and contrast the way of the world with the way of Jesus. The world teaches violence against our enemies. Christ teaches love, forgiveness and mercy."

Sadly, he added, confessing what he termed a “horrible thought” has been wrongly construed as a statement of his own belief.

“Words have been put in my mouth that are diametrically opposed to what I intended,” he said.

He said he wished that attendees who were offended by his remarks had approached him in person. 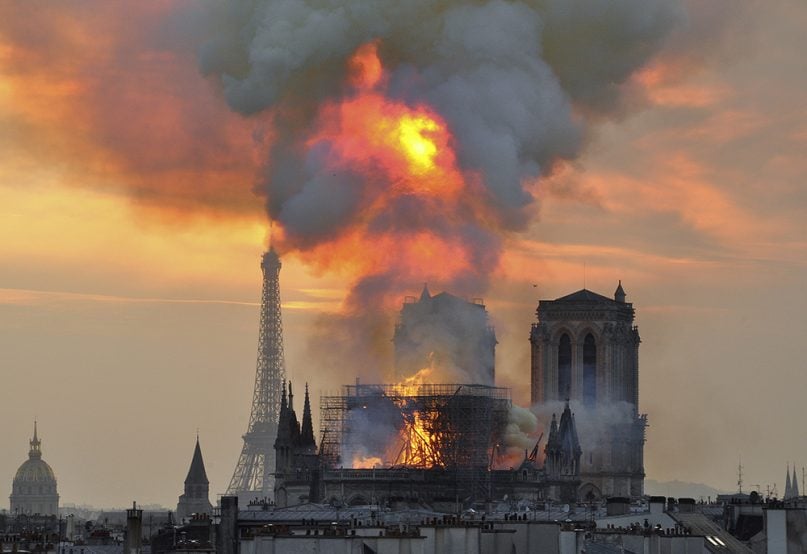 Flames and smoke rise from the blaze at Notre Dame Cathedral in central Paris on April 15, 2019. (AP Photo/Thierry Mallet)

Visitor Sarah Assali said she walked out during the sermon. Then she went back and listened to the sermon several times on YouTube before it was taken down.

"I remember sitting there with my mouth gaping looking around at others (sic) reactions and saying, 'is this serious?' I was very offended,” said Assali, a general surgery resident at Allegheny General Hospital, in an email to RNS. “I thought at first that maybe it would lead in a direction where he apologized for having those thoughts about an entire ethnic population, that anti-Islam or racist thoughts are wrong and that these are people too, that we should all love one another. I thought he’d find a way to make it a talk about forgiveness, love and peace. But he did not.”

Assali said that St. John’s was her boyfriend’s family's church. She intends never to return and says she has no plans to contact Johnson.

“I do not believe a simple conversation would suffice as his words were inflammatory, dangerous and irresponsible,” she said. "This topic needs to be brought to light and exposed so that an example can be made that the entire community can learn from.”

But lifelong parishioner Jeff Boarts said he had no problem with the pastor’s words, nor had he heard anything negative from others in the congregation.

“I was fine with it,” he said. “When he made comments about Muslims he qualified the statement by saying he knew he was wrong, he knew he was wrong, (that) he needed to be more like Jesus who preached love and forgiveness and peace. It’s possible they didn’t hear that qualification.” It’s regrettable, he said, that those troubled by it didn’t speak directly with Johnson. 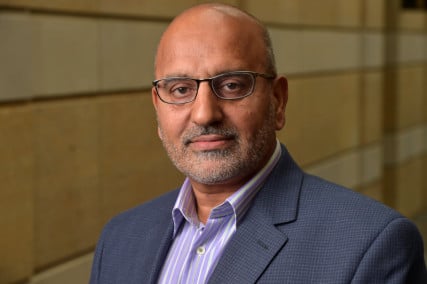 “He turned the sermon into an inquisition of Muslims,” said Moosa.

St. John’s is a member of the North American Lutheran Church, a national coalition of congregations formed in 2010 that broke off from the larger Evangelical Lutheran Church in America after disagreements over doctrine and practice. Gay ordination in the ELCA, though not the only issue, was the precipitating one, according to Luther Seminary church history professor Mark Granquist.

Though a member of the ELCA, Granquist said he has many friends in NALC and attends their conventions.

“NALC is pretty moderate,” said Granquist. “Where this guy is coming from, I have no clue.”

NALC, which tries to navigate “a fine line down the middle,” itself isn’t much given to making public social statements of any kind, according to its director of communications, Andrew Fuller, who described the controversy over Johnson’s sermon as based on a misunderstanding.

“He was literally saying what he said as a confession, as a thing that is wrong, and they are trying to make it seem like he believes exactly the opposite," he said.

“The old line is that you are responsible, not for what you think you say, but how people understand you. I just feel that he had no clue as to how he might be interpreted.”

In the ELCA, his own denomination, while there have been scattered initiatives toward greater mutual understanding, said Granquist, he doesn’t see a trend toward ecumenical outreach between American Muslims and Christians. Debris is seen inside Notre Dame Cathedral in Paris, on April 16, 2019. The altar, rear, was spared when parts of the vaulted ceiling collapsed during the recent fire. (Christophe Petit Tesson, Pool via AP)

His main take away?

“Anything said about a neighboring faith needs to be done with some care. Even if you have good intentions, it may not come out the way you intend it. I don’t know what his (Johnson’s) intent was. I can’t judge it," Granquist said.

It’s time for Christians to become more tolerant of those who don’t share their beliefs, said Moosa. Asked how to make that happen, he suggested that they find ways to visit mosques, synagogues and other places of worship, both to socialize and to learn more about other faiths.

“I think this pastor would benefit from the opportunity to talk and interact with Muslims in his community in Pennsylvania,” he said.

But Johnson, who calls himself a sinner and apologized to anyone who may have been offended, says that he is being misjudged. “Only through Christ do I have a chance of getting it right. I’m called to go into battle with the word of God and acts of love and mercy."