COLOMBO, Sri Lanka (AP) — Catholic officials and parents in Sri Lanka are hopeful that church-run schools will begin to reopen soon for the first time since last month’s devastating Easter Sunday attacks on churches and hotels.

All of the island nation’s schools were set to reopen the day after the bombings following a two-week break, but they remained closed after the attacks, which killed more than 250 people and injured hundreds more. Government schools reopened last week, but many children stayed home, fearing another attack.

Catholic schools, however, have stayed shut out worried that other Catholic properties could be targeted in further attacks.

In a memo to Catholic institutions earlier this month, Cardinal Malcolm Ranjith, the archbishop of Colombo, said he had information from a trusted foreign source that a famous church and a lay institution were to be attacked. The church confirmed that the memo, which first appeared on social media, was authentic.

On Sunday, the Catholic Church held the first regular Sunday Mass since the April 21 coordinated suicide bombings, amid tight security. Sunday services had been canceled the two previous weekends apprehensive of more attacks, leaving the faithful to hear Mass via live TV transmission from Ranjith’s residence.

Rangika Perera, a teacher in a Catholic school where her daughter also studies, said reopening the schools and churches was the best way to demonstrate that Sri Lanka’s Catholics hadn’t been defeated by terrorism.

“They want to deprive us in every way and we should not help them succeed by our fear,” she said.

The Rev. Ivan Perera, the priest in charge of Sri Lanka’s Catholic schools, said that Catholic school administrators have sent study packs to children by email with exercises on a variety of subjects, but that the toll has been more than academic.

Priests and nuns working as counselors said Catholic school students “are very traumatized and are very disturbed, a lot of fear in them,” according to the Rev. Perera.

“It will take quite a bit of time for them to get back to normal attitudes. It’s very unfortunate that at this age children should be so traumatized and be full of fear,” he said, adding that when schools reopen, administrators will offer students psychological and spiritual help.

The Easter attacks — which were carried out by radicalized local Muslims and claimed by the Islamic State group — targeted three churches: Sri Lanka’s famous St. Anthony’s Shrine in Colombo, the capital; St. Sebastian’s Church in the seaside, majority-Catholic town of Negombo, outside Colombo; and the protestant Zion Church on Sri Lanka’s east coast. Three luxury hotels in Colombo — the Shangri-La, Cinnamon Grand and Kingsbury — were also attacked.

There are currently about 40 schools run by Sri Lanka’s Catholic Church, which owned hundreds of schools by the time the Buddhist-majority island gained independence from Britain in 1948. In the 1960s, the state nationalized hundreds of Catholic schools amid a post-independence wave of Sinhala Buddhist revivalism.

According to the Rev. Perera, an estimated 10 to 15 Catholic school students died in the blasts, including eight girls from the same convent school in Negombo. The United Nations children’s fund said 45 children were killed in the six near-simultaneous suicide attacks, including tourists.

“For the past 10 years, there weren’t any of these things,” said Anushka Wijeyeratne, a mother whose two children, ages 5 and 9, attend Catholic school. “Everything is new to them — the checkpoints and other things are absolutely new to them. As parents we have to go back to basics and rethink, we will have to worry about security.”

RELATED: Who are Sri Lanka’s Christians?

According to conservative U.N. estimates, some 100,000 people were killed in Sri Lanka’s civil war. Minority Catholics were not spared from the violence, but they were not targeted for their religious beliefs. Since the war ended, Sri Lanka experienced only a handful of small-scale incidents of communal violence before the Easter attacks.

Cardinal Ranjith has been an outspoken critic of the government for failing to act upon near-specific intelligence from Sri Lanka’s neighbor India that provided details of the plot and the militants who were to be involved.

Parents say they trust the church’s leadership more than the government’s when it comes to the safety of their children.

But, she added, “How long are we going to sustain this sense of fear?” 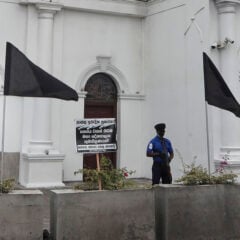 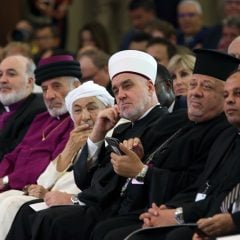 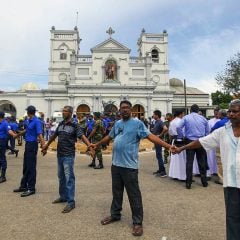 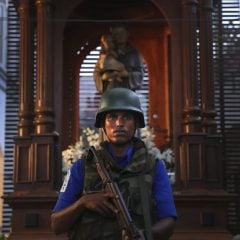 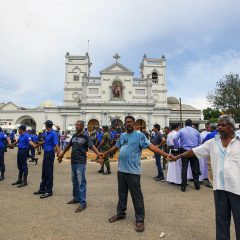 Martini Judaism
Is there a war against Christianity?
Follow us on Facebook!
Submit your photos to RNS