(RNS) — Semester in and semester out, I emphasize to my students that achieving an argument in which a genuine disagreement is actually engaged takes a significant amount of work.

Among other things, it takes careful attention to the kind of language we use. Does it open up engagement or close it off? Does it make room for the complexity of an issue or does it artificially simplify it? Does it reflect the actual views of your perceived opponent? Does it reflect your actual views?

Much of the time, especially when it comes to the hot-button issues I often teach in bioethics, we find the language available to us in traditional public discourse almost totally inadequate. Indeed, the language available to us goes beyond being unable to capture complexity: It usually actively hinders engagement by setting up an antagonistic binary: religious/secular, pro-/anti-science, left/right, progressive/conservative, etc.

The problem is especially bad when it comes to talking about abortion, which adds the life/choice binary to the ones above to create the mother of all antagonistic binaries.

This is especially the case now that abortion has returned with a vengeance as a political issue. With a 2020 general election looming and a major Supreme Court ruling on abortion likely to take place during the 2019-2020 term, we simply must do better at communicating. We need brand-new ways of thinking and speaking about abortion. The assumptions of the culture wars of the 1980s no longer apply.

Start with “pro-life” and “pro-choice.” It isn’t a matter of if, but when, this hopelessly simplistic and outdated way of talking about abortion goes away. 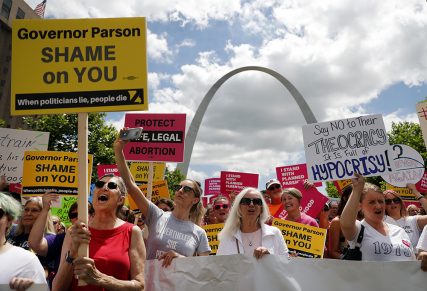 Abortion-rights supporters take part in a protest Thursday, May 30, 2019, in St. Louis, Mo. A St. Louis judge heard an hour of arguments Thursday on Planned Parenthood’s request for a temporary restraining order that would prohibit the state from allowing the license for Missouri’s only abortion clinic to lapse at midnight Friday. (AP Photo/Jeff Roberson)

Recently, following extreme measures in New York and Illinois legislatures that dramatically expanded abortion rights and equally extreme efforts in Alabama and Missouri to curtail them, Melinda Henneberger, an award-winning columnist for the Kansas City Star, wrote, “It should not have taken me this long to see that neither the pro-life nor the pro-choice label fits me. But I won’t ever again try to make myself fit either one.”

Kirsten Powers, a CNN pundit and USA Today columnist, also announced earlier this month that she now identifies as “both pro-choice and pro-life.”

Henneberger’s and Powers’ move fits with the position Americans tend to pick when given the chance (abortion poll questions often serve to hide more of respondents’ true feelings than they reveal). According to the most recent Gallup poll, 6 in 10 people want abortion broadly legal before week 12 of pregnancy. After that, however, 7 in 10 want abortion broadly illegal. This data shows that a simple life/choice binary is nonsense.

It is hardly surprising that, as John Gehring, Catholic program director at Faith in Public Life, has pointed out, “in a 2011 Public Religion Research Institute poll, seven in 10 Americans said the term “pro-choice” described them somewhat or very well, while nearly two-thirds simultaneously said the term “prolife” described them somewhat or very well,” while in “a 2015 Vox poll of 1,067 randomly selected adults, 39% selected both “pro-choice” and “prolife” as describing their views on abortion.” Our major media, as a first step, ought to immediately stop using the life/choice binary as a central way of covering the abortion debate.

This may seem like a big reach, however, when most major media not only fail to listen to the broad majority of views on abortion, they actual force labels onto people who reject them.

In many publications, I’m not permitted to claim my view is pro-life — but must define it as anti-abortion. In our age of radical respect and deference to how individuals and groups identify, abortion is an exception. Rather than defer to how individuals and groups identify themselves, most mainstream media organizations say they have to select either “pro-choice” or “anti-abortion.”

We got an insider look into how language in the abortion debate is manipulated by major media via this NPR memo. Here are some things that were revealed:

· Do not refer to a “fetal heartbeat” law, the memo cautions staffers, since that is the term used by “proponents.” Apparently, it is also relevant that a heartbeat can be detected at six weeks’ gestation, which is “at least a few weeks before an embryo becomes a fetus”

· Do not use the phrase “partial birth abortion” ban — again, because that’s what its supporters call it. Instead use language like “a procedure known medically as intact dilation and extraction” or “a certain procedure performed after the first trimester of pregnancy”

· Do not use the term “abortion clinics.” Instead use “medical or health clinics that perform abortions”

· Do not use the term “unborn” because that “implies there is a baby inside the pregnant woman” and because, again, it is the language used by anti-abortion groups. It is “incorrect” to “call the fetus a baby”

This goes against any common way of speaking. When discussing celebrity pregnancies, for instance, will NPR use the phrase “fetus bump” because it is wrong to refer to the fetus as a baby? Will they stop using the phrase “fertility clinic” because some clinics also do tubal ligations? Will they use the phrase “carotid endarterectomy” instead of describing a procedure that clears blockages from a neck artery?

Of course not. That’s because the language choices used by NPR and other major media on abortion have an ideological bias (subconscious in most cases, I believe).

The problem with NPR’s dictum is that there is no value-neutral or ideologically neutral way to engage the major issues on abortion. It is way past time that the gatekeepers of that discourse put all ideologies — religious or secular — on the same playing field.

We already have a fractured public discourse when it comes to abortion. If something isn’t done to change it, our society will continue to fracture — and maybe even break — if we get a SCOTUS abortion decision or if the 2020 general election becomes too divisive.

In 2015, I published a book titled “Beyond the Abortion Wars.” It was full of arguments and statistics and policy proposals. Four years later, I see that the most important part of the book was the introduction, where I discussed the language and assumptions that are responsible for the way we frame and discuss the issue in the first place.

Our conversations about abortion need to capture the complexity and nuance of what the electorate actually believe. If we do not, it is difficult to see how the next phase of our abortion ‘debate’ becomes anything other than an all-out political fight to the death.