SAMMA, Estonia (RNS) — In the middle of a dense forest in northern Estonia, where the closest village has a population of 32, only a wooden sign with the word “HIIS” clumsily daubed in green indicates anything unusual in the vicinity.

“Hiis” means “sacred grove” in Estonian. Past another wooden board with a runic symbol carved on it — it is customary to knock on this board — is a green clearing where visitors have tied ribbons around trees and placed eggs at their bases as a gift and left the dark remnants of a fire.

“All that is brought there has to be eaten there or burned in the ritual fire,” said 28-year-old Tõnu Rehela, who has been a member of Estonia’s nature-oriented, neopagan Maausk community since he was 16. “Through the fire, the gods eat. Through the holy tree, the gods drink.” 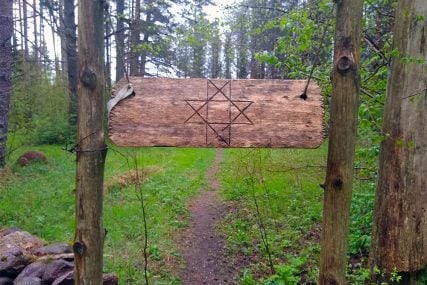 The board at the entrance to Tammealuse Hiis, a sacred grove in the forest near Samma, Estonia, on May 13, 2019. RNS photo by Aliide Naylor

While pagan and folk religions may seem archaic to the wider world, they are thriving across the Baltic states. The Maausk community, along with Estonia’s other prominent neopagan group, the Taaraists, tripled in size from 2001 to 2011, the latest figures available from the national census. Meanwhile, a 2014 study from the University of Tartu indicated that 61% of Estonians believed that neopaganism was the “true” religion of Estonia.

There is a similar situation in both Latvia and Lithuania.

The increase in popularity is “mainly young people,” said Inija Trinkūnienė, the high priestess known as the “Krive” of Lithuania’s Romuva community.

“More and more people are asking for us to (perform) wedding ceremonies. … They want to have their children blessed by the ancient traditions,” she said, adding this is true even of people who aren’t officially in the community. “People more and more are becoming aware of what they really are.”

While Trinkūnienė performs rituals for births, marriages and deaths, they are still not acknowledged by the government. Official debates over their official recognition started in May 2018. 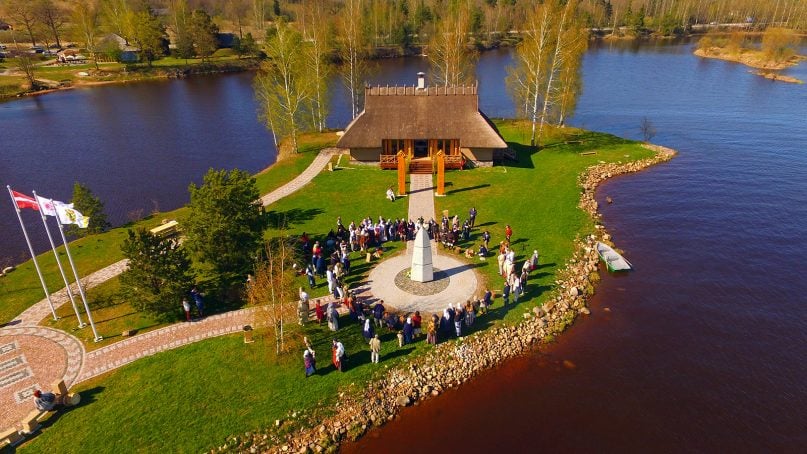 People gather at the Lokstene Shrine, where Latvian neopagans hold ceremonies and annual celebrations, on May 6, 2017, in Pļaviņas Municipality, Latvia. RNS photo by Uģis Nastevičs

“Wedding ceremonies are still not recognized by the state, but we are waiting for Parliament to make their final decision,” she said. “According to the law of religions in Lithuania — 25 years (after) our official registration, we can apply for getting a higher status.”

Lithuania was the last nation in Europe to officially Christianize (1387), but it took much longer for the religion to take root. Under the Soviet Union, which occupied the Baltics after World War II until 1991, the native religions were suppressed along with nationalist sentiment. 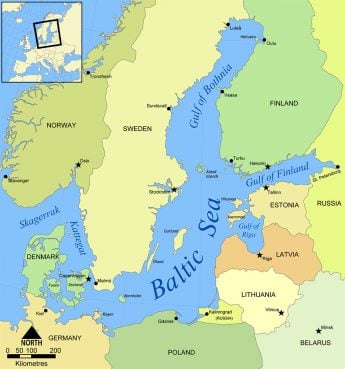 The Baltic states, lower right, on the western edge of Russia. Map courtesy of Creative Commons

Still, these religions lingered partly because fostering a connection to the land, old languages, old gods and tradition was a way of preserving a form of national identity and local memory in the face of an occupying power.

“It was completely banned,” said Aldis Pūtelis, a researcher at the University of Latvia’s Institute of Literature, Folklore and Art. “It was the reaction to the perceived danger to perceived Latvianness. This whole movement was started as another way of strengthening it, and it was really popular among the exiled Latvians. Its main purpose was to strengthen the feeling of Latvian-ness.”

The old religions also offered more than Christianity, according to proponents. “People say they seek such spirituality that is not available in other religions and a way of fostering Latvianness,” said Uģis Nastevičs, a spokesperson for Latvia’s Dievturība. “The community has been gradually growing over the last 10 years. All age groups are represented.”

Trinkūnienė said that when her husband celebrated the summer solstice festival in 1967, lighting sacred fires and praying to Lithuanian gods and goddesses, he was soon expelled from university, lost his job and was unable to find regular work until the beginning of the 1990s, when the struggle for independence gained momentum.

Meanwhile, both Lithuania’s Romuva and Latvia’s Dievturība communities have thrived among those in exile from the war and Soviet occupation. Today, the Dievturība have a branch in Wisconsin and other places across North America, according to the organization, while the Romuva community is active in Indiana, among other places. 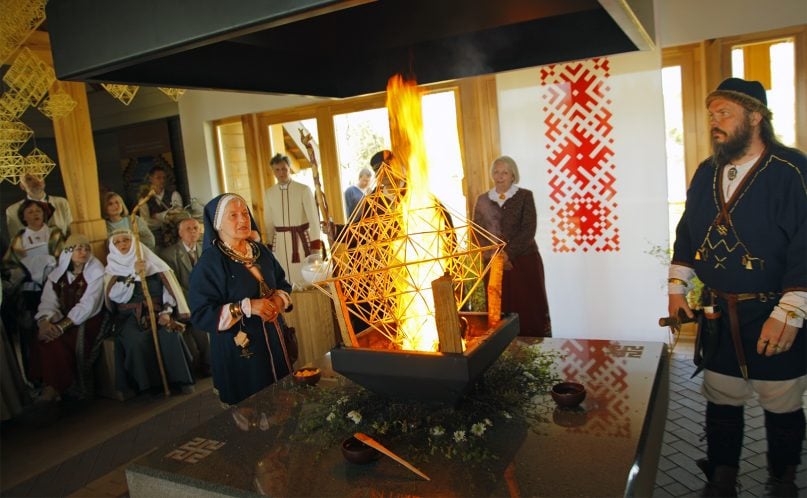 The pagan religions have been spurred especially by a growing awareness of climate change and the rise of conservation movements that tap into a deep local connection to nature and a desire to protect sacred spaces.

“In Lithuania there is a strong movement against deforestation,” said Trinkūnienė.

Outside Tammealuse Hiis, the sacred grove in the Estonian forest, a sign states that as late as the 1930s people would converge on the area to meet relatives, play music and dance. “The long tradition of get-togethers died during World War II, but the power of the sacred site continued,” wrote local author Ahto Kaasik, a folklore researcher, director of the Center of Natural Sacred Sites at the University of Tartu and key figure in the movement on the sign.

Rehela often celebrates Munadepüha, a folk equivalent of Easter, at the grove. During this event his community holds rituals where members strike knives on axes to make bell-like noises, and the ritual leader gives a speech to the old gods and their forefathers.

“Sometimes we hear a sign during the rites,” he added. “Once a dog came in and knocked over a milk flask. … Perhaps the gods didn’t want us to drink milk on this day, or they wanted to drink it themselves.”