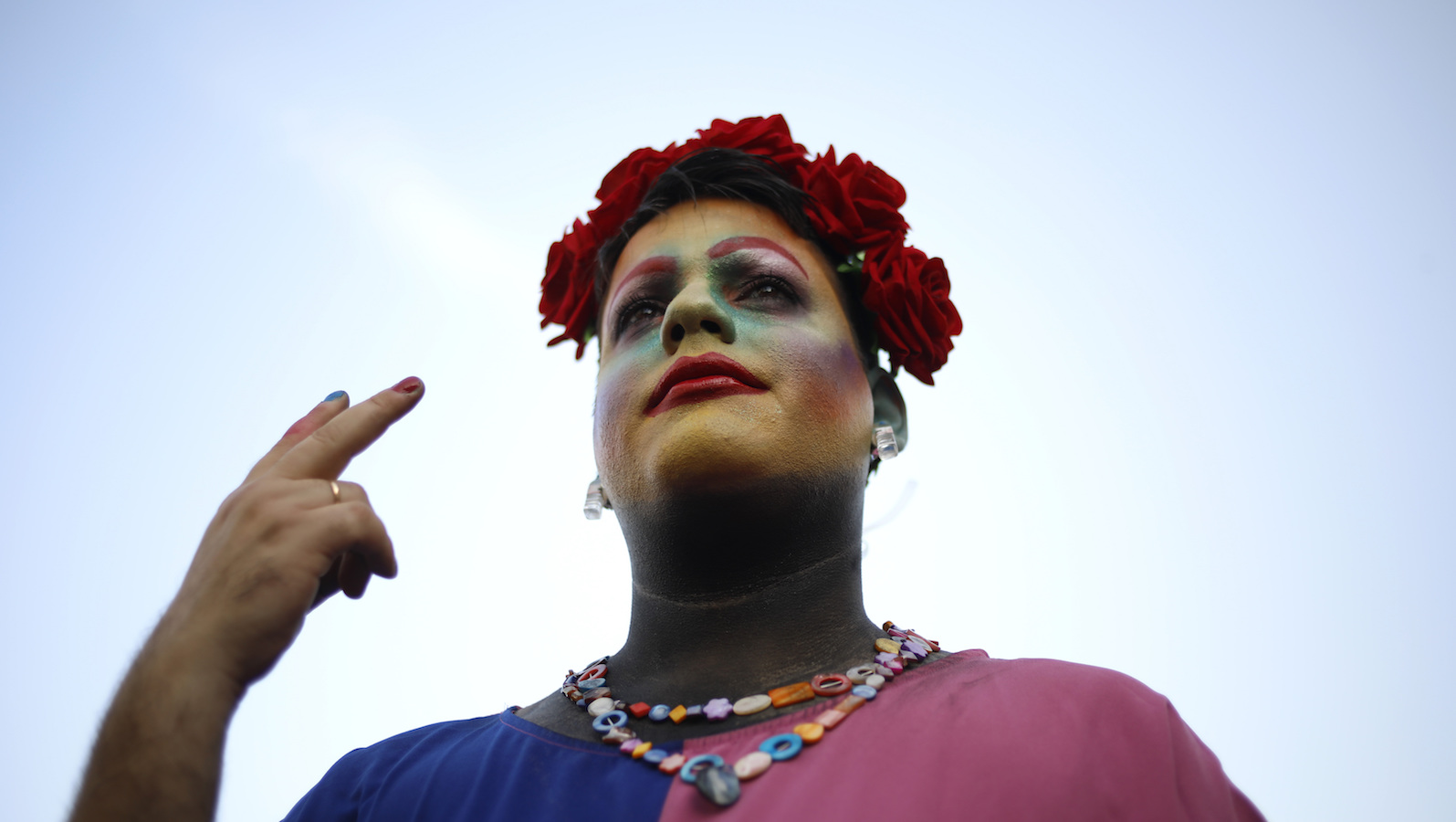 JERUSALEM (RNS) — Liora Halevi, who is bisexual, has an uneasy relationship with Jerusalem, the city she has called home for a decade.

She feels a strong spiritual connection to the city, but as part of the LGBTQ community, she feels unwelcome.

“I connect with the spiritual aspects of Jerusalem,” she said during the city’s Pride and Tolerance march on Thursday (June 6). “I like it when Shabbat comes in and the quiet settles over the city. There is nothing else quite like it.”

But Halevi is also well aware of the antipathy many in Jerusalem — a religious, conservative city — feel toward LGBTQ people.

“I personally haven’t experienced any incidents, but there is fear,” Halevi said. “During past pride parades, when I left the secure area and went back into society, I didn’t know whether anyone was looking at me. So you fold up your (rainbow) flag and peel off your stickers.”

Despite this, Halevi has no plans to leave the holy city. 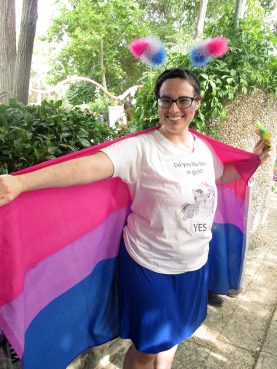 Liora Halevi, who is bisexual, has an uneasy relationship with Jerusalem due to the hostility of some of its conservative and/or religious residents. RNS photo by Michele Chabin

Although many LGBTQ Israelis and Palestinians have moved to liberal Tel Aviv, considered one of the most LGBTQ-friendly cities in the world, those who live in Jerusalem are trying to make their city a more tolerant one.

“Jerusalem is the largest city in Israel, the capital city,” said Ofer Erez, CEO of the Jerusalem Open House advocacy group. “We believe that everyone around the world, of any religion or orientation, deserves to feel proud and welcome in Jerusalem.”

That’s admittedly a challenge, Erez said, in a city where some residents go out of their way to make LGBTQ people feel unwelcome.

Last month, the city’s chief rabbi demanded that no rainbow flags be allowed at the march, saying that they made the city ugly, according to The Jerusalem Post. In recent days a politically right-wing organization posted billboards asserting that the only real family is headed by a father and a mother.

Many members of the Facebook group Secret Jerusalem condemned the billboards as deeply offensive. But a few blasted the pride flags and other march-related items cropping up in the city before the march. One Orthodox Jewish member grumbled that Israel has become “nationally obsessed” with LGBTQ rights, “as if it is our national identity.”

In the past, the controversy over the parade has led to violence. During the 2015 Jerusalem pride march, an ultra-Orthodox extremist stabbed to death 16-year-old Shira Banki, a straight teenager, and injured other marchers. 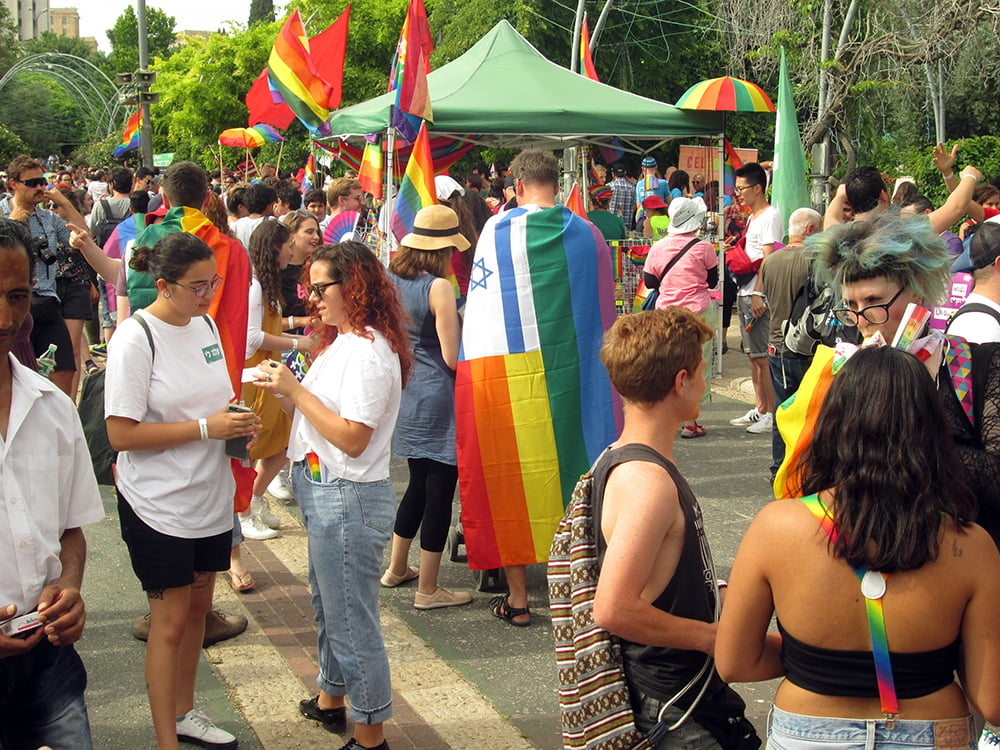 The mood was festive at Jerusalem's Pride and Tolerance march on June 6, 2019. RNS photo by Michele Chabin

The extremist had recently been released from prison after stabbing three people a decade earlier. Israeli police were blamed for not providing adequate protection to the marchers due to anti-LGBTQ bias.

Blanki’s slaying shocked both the police and leaders from various ethnic and religious communities, to the point where some were willing to sit down with LGBTQ leaders.

“Today we have a productive dialogue with conservative and religious groups," said Erez.

When a crime against an LGBTQ person is committed, Erez said, the criminals aren't necessarily motived by religion.

"They only use religion as an excuse for their radical, homophobic feelings," Erez said.

This year, 2,500 police guarded the festive pre-march event, which was held in a park surrounded by police barricades.

Every person who entered the enclosed space had to undergo a security check.

Ronit Horwitz Peskin, who is ultra-Orthodox, planned to attend the march because the Torah commands Jews to treat people the way they want to be treated.

“What better way… to announce myself as an ally, and to say I don't support hate and bigotry, because that's not what my Torah says. And that's what I'm teaching my kids by bringing them,” Peskin wrote in a Times of Israel blog post.

The march was a joyful event for the thousands who attended. Participants waved rainbow flags and cooled themselves with rainbow fans and rainbow ice pops. Many wore T-shirts, created by the Reform movement, with the biblical commandment Peskin cited. At the Jerusalem Pride and Tolerance march, Sara Halevi, center, and other mothers offer Free Hugs From Moms on June 6, 2019. Halevi, a cognitive behavioral therapist, has treated numerous LGBTQ teens who have contemplated suicide. Many were rejected by their parents. RNS photo by Michele Chabin

For Sara Halevi, Liora’s mother, it was a chance to offer motherly hugs to anyone seeking one.

“100% of the ones who have come through my door from religious families have contemplated suicide," she said.

Walking hand in hand at the event with a friend, Anna Levi, a 21-year-old transgender woman who grew up in an ultra-Orthodox home in Jerusalem, said she felt “empowered” by the sight of thousands of city residents waving banners and singing songs in support of LGBTQ rights.

Levi said the city’s annual pride march is a beacon of light in an often hostile city.

“Jerusalem is very oppressive. People stare. I haven’t been confronted, but my friends have. Some have been beaten up. Sometimes it’s scary to go outside.”

For at least one day, that changed.

Related Posts
By Jeffrey Salkin
Warning: Your piety might be dangerous to your health
By Alejandra Molina
Mexican-born bishop chosen to soon lead the Diocese of San Bernardino
By Yonat Shimron
At Bishop Barber's NC church, Pete Buttigieg works to woo black voters
By Catherine Pepinster
Chief rabbi's attack on anti-Semitism keys reckoning over faith in UK election
By Matthew J. Cressler
The priest who channeled Black Power into the Catholic Church