The sad fact is that it is possible to journey from first grade to a doctorate in U.S. school systems having never once taken a survey course on the Bible, much less having been introduced to basic knowledge of the world’s religions. When religion is treated at all, it is usually in bits and pieces — the biblical references in Melville’s “Moby Dick,” perhaps, or the religious issues fueling the Crusades.

The depth of Americans’ ignorance was exposed in a 2007 Pew Research Center poll that has become the stuff of late-night comedy. Pew found that 50% of high school students think that Sodom and Gomorrah were married. Another Pew poll, from 2010, found that a majority of Americans cannot name the first book of the Bible but can provide the names of the four Beatles. 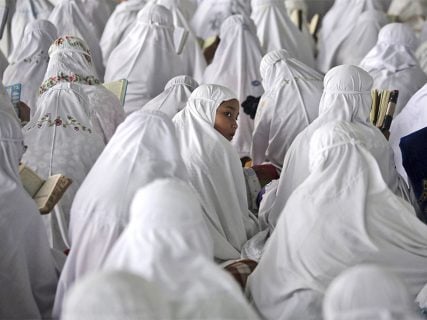 Female students read the Quran during the first day of the holy month of Ramadan at Ar-Raudlatul Hasanah Islamic Boarding School in Medan, North Sumatra, Indonesia, on May 17, 2018. (AP Photo/Binsar Bakkara)

It gets worse. The confusion is stunning. Most Methodists cannot name a distinctive doctrine of their denomination’s founder, John Wesley. A 2005 survey revealed that 36% of respondents knew what Ramadan is, but 17% believed it to be the Jewish Day of Atonement. Most Americans admit they are completely unfamiliar with the basic teachings of Islam, Buddhism or Judaism. Ask them about more obscure sects, like Alawites or Sikhs, and they’ll simply shrug.

Yet Bashar Assad, the dictatorial president of Syria, where we have U.S. troops on the ground, is an Alawite. Our experience in Iraq was also highly affected by the fierce tensions between Sunni and Shiite Muslims.

And what of variations in the Catholicism that is the majority religion in American government? Or the Russian Orthodoxy of Vladimir Putin? Or the evangelicalism behind the presidency of Donald Trump? Or the hijab-wearing Muslim woman down the street?

Ignorance of these matters does not just keep Americans from understanding their world. It can also lead to violence.

In 2015, a man entered a Grand Rapids, Mich., convenience store, accused the clerk of being a terrorist and shot him in the face. The clerk was a 34-year-old Sikh whose turban and beard the shooter ignorantly associated with Islam. The incident echoed a more famous one that came just days after the horrible events of Sept. 11, 2001, when Frank Roque walked into a gas station in Mesa, Ariz., and killed the owner. Roque thought the man was a Muslim and wanted vengeance for what had befallen his country. He, too, had been confused, he later said, by the turban and the beard.

Nor were Sikhs the only victims of religious ignorance after 9/11. On Oct. 4 of that same troubled year, Mark Stroman fired his .44-caliber chrome-plated pistol into the body of Vasudev Patel, a Mesquite, Texas, convenience store clerk. Stroman also wanted payback for the events of Sept. 11 and so he decided to kill a Muslim from the Middle East. He, too, was confused. Vasudev Patel was from India. He was a Hindu.

Had any of these shooters known more about Islam or Hinduism they might have recognized that ordinary Muslims had nothing to do with 9/11 — and Hinduism nothing at all. The ignorance of the difference between Muslims, Sikhs and Hindus compounded the pain of deaths motivated by hate and ignorance. 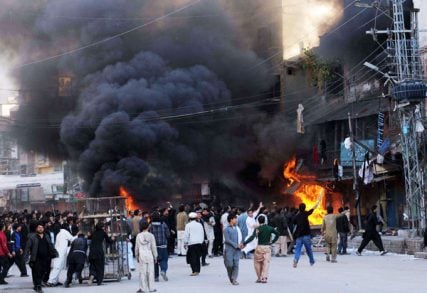 Participating in a procession mourning the deaths of the Prophet Muhammad’s grandchildren, Shiites torch a market in Sunni-dominated Rawalpindi, a garrison city adjacent to Pakistan’s capital, Islamabad, on Nov. 15, 2013. Photo by Naveed Ahmad

This kind of religious confusion not only exists on the “street” in the United States, it also exists at the highest levels of government.

Soon after the U.S. invasion of Iraq in 2003, three Iraqis met with President George W. Bush in the Oval Office to explain what the situation would be after the fall of Saddam Hussein. These men mentioned the two main sects of Islam, Sunni and Shiite. According to U.S. Ambassador Peter Galbraith, the president didn’t understand what these two words meant. He stopped the three men and exclaimed, “I thought the Iraqis were Muslims!” Another version has him saying, “You mean … they’re not, you know, there, there’s this difference. What is it about?”

Bush wasn’t alone. Just months before that Oval Office meeting, Jeff Stein, national security editor of the Congressional Quarterly, had written a New York Times op-ed reporting that when he asked congressional leaders about the difference between Sunni and Shiite, most of them were unsure. In fact, “Most American officials I’ve interviewed don’t have a clue,” Stein reported. Not the heads of congressional intelligence committees. Not senior staffers at the State Department. Not the deputy assistant director of the FBI.

The critical question endures: Were U.S. failures in Iraq based, in part, upon an ignorance of Sunni and Shiite distinctions? It is possible, and there will be more such failures to come if this dire gap in our educational systems is not repaired.

Intriguingly, much of this crisis may be rooted in a myth. School districts and state boards of education fear recriminations if they deal with matters of faith in the classroom. Yet even the American Civil Liberties Union — dreaded in many American school districts for its lawsuits against religion in public education — urges objective teaching of the world’s religions. In its Joint Statement on Current Law and Religion in the Public Schools, the organization declared, “It is both permissible and desirable to teach objectively about the role of religion in the history of the United States and other countries.” There is, then, common ground in this matter of religion in the classroom. The faithful of nearly every religious type contend that knowledge of religion is the mark of an educated person. Separation of church and state advocates like the ACLU contend much the same, so long as instruction in religion is “objective.” And our religiously tumultuous global society is waiting.

It is a crisis we can answer. School districts and state boards of education must set standards for religious knowledge. They must also recognize that the Bible can be objectively taught as literature in public schools and that few — not even the ACLU — will object.

Curricula must be redesigned so that time is taken to survey each religion treated in a literature or world history class, rather than dealing with them only in passing. Knowledge of the major world religions must be regarded as an essential part of the general education requirements of any bachelor’s degree.

These efforts will face opposing headwinds. There will be controversy. Yet the challenges can be surmounted. A consensus can be achieved, and this woeful American knowledge gap can be filled.

We have a crisis of religious knowledge in the United States. It is solvable. Doing so may save lives and will certainly make us more skilled in contending globally. It is time for us to explode the myths, stand down the fear, implement the needed programs and become the religiously knowledgeable people that our times require.

(Stephen Mansfield is the New York Times bestselling author of “The Faith of George W. Bush,” “The Faith of Barack Obama,” “Lincoln’s Battle with God” and “Choosing Donald Trump.” The views expressed in this commentary do not necessarily reflect those of Religion News Service.)