BALTIMORE (RNS) — This week’s meeting of the U.S. Conference of Catholic Bishops in Baltimore was touted as a chance for clerics to beat back the perception that they are out of touch with parishioners who see them as ineffective at dealing with the abuse crisis.

That goal seemed a long way off as the conference began Tuesday (June 11). The session started with clerics being reminded of their failings when it comes to abuse before segueing later in the morning to a long discussion of the internet forum Reddit and writer Jordan Peterson.

First up was an address from the National Advisory Committee, a group that advises the Administrative Committee of the U.S. Conference of Catholic Bishops. Anita Raines, the group’s chair, praised the bishops’ efforts to address the abuse crisis. But she suggested the proposals reviewed by her committee did not adequately include the voices of lay Catholics.

She singled out a proposed model that would allow metropolitan bishops to oversee investigations of other bishops accused of mishandling abuse cases or abusing others themselves.

The laity, she said, is skeptical that bishops can hold each other accountable.

“While appreciative to the openness to scrutiny … several NAC members questioned how the faithful can hold the bishops to their call,” she said.

Raines said the NAC was concerned that the proposals did not mandate the involvement of lay people and would not allow for independent investigations.

“This proposed model still gives the perception of bishops investigating bishops,” she said.

Francesco Cesareo, chairman of the National Review Board, tasked with preventing the sexual abuse of minors in the church, was even more critical.

He said that there had been “positive momentum” within the church in response to the abuse crisis and noted that many dioceses have released the names of priests and others accused of sexual misconduct. But he said the responses to the “dual crises” — abuse and leadership — have been inconsistent. He called for a more systemic approach.

“Until there is a uniform response and mechanism across all dioceses … we cannot be confident that the response to this dual crisis is adequate or sustainable over time,” Cesareo said.

He also expressed discomfort with solely tasking metropolitans with investigatory power, saying the NRB “remains uncomfortable” with the concept of “bishops policing bishops.”

“The metropolitan should not be the sole gatekeeper,” he said.

Both the NRB and the NAC insisted that the Vatican investigation into disgraced cleric Theodore McCarrick, who was stripped of his cardinal title in the wake of allegations he committed acts of sexual misconduct and child sex abuse, be conducted in a transparent manner. 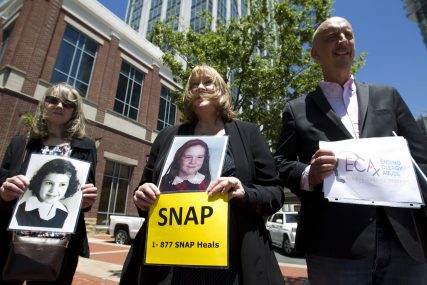 Becky Ianni, center, a survivor of priest abuse, holds a picture of her younger self along with other demonstrators outside the venue where the United States Conference of Catholic Bishops 2019 Spring meetings are being held in Baltimore, Tuesday, June 11, 2019. Ianni says she was 8-years-old when the priest of her family parish began to abuse her. (AP Photo/Jose Luis Magana)

A report from the Pew Research Center published Tuesday morning highlighted the depth of discontent among lay Catholics regarding the abuse crisis. According to the survey, the vast majority (69%) of American Catholics say recent reports of the sexual abuse crisis reflect ongoing problems within the church that are still happening.

A smaller percentage of Catholics (33%) also said that they believe that sexual abuse and misconduct are more common among Catholic priests and bishops than in other religious traditions. About half (51%) of Americans overall said the same.

Cardinal Blase Cupich, who heads the Archdiocese of Chicago, was one of several bishops who called for finding ways to incorporate more lay voices into the investigation process.

Zach Hiner, executive director of the Survivors Network of those Abused by Priests, echoed the criticisms of the NAC and NRB about the resolutions. He expressed frustration with bishops who argued that they couldn’t mandate lay involvement.

“The Metropolitan model is just more of the same, with bishops policing other bishops,” he told Religion News Service in an email. “I thought it was notable that it was said that the USCCB cannot use the word ‘must’ when referring to lay involvement in this model as that is too much of a directive.”

He added: “Rather than debating just how strong the exhortation to include laypeople should be, the USCCB should be starting with the premise that laypeople will be extensively involved in any internal investigation.”

Bishop Robert Deeley of Maine argued at a press conference later in the day that bishops can’t compel lay participation in the process because doing so would be going against language outlined by the Vatican.

Things took an unexpected turn as the session approached the lunch hour. After initial discussion over the proposals closed, Robert Barron, the auxiliary bishop of the Archdiocese of Los Angeles, delivered a presentation on how the church can reach out to the religiously unaffiliated — what Cardinal Seán Patrick O’Malley of Boston called the “second greatest problem” facing the church. 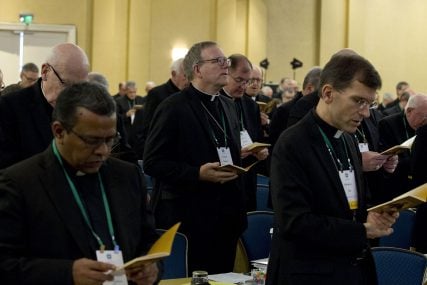 Barron cited Peterson, a controversial Canadian psychologist beloved in some conservative circles, as an example of someone who has used social media effectively to reach the unchurched. The bishop also noted that he has conducted a successful Reddit AMA, or “Ask Me Anything,” question-and-answer session conducted on the website to reach religiously unaffiliated people.

Another bishop later asked for a clarification for how to spell the website’s name.

Barron did not focus on the potential impact of the abuse crisis on dwindling church numbers, but Pew’s survey did: More than one-quarter (27%) of U.S. Catholics told Pew they have scaled back Mass attendance or reduced the amount of money they donate to their parish (26%) in response to the recent reports of sexual abuse and misconduct.

The resolutions designed to address the crisis are slated to be voted on later this week, alongside other topics dealing with immigration and politics. The gathering is one of several the USCCB convenes each year, assembling many of the more than 440 active and retired bishops in the United States to discuss matters impacting the American Catholic Church.