BIRMINGHAM, Ala. (RNS) — Southern Baptists, faced in recent months with hundreds of allegations of sexual abuse in its ranks, have overwhelmingly adopted changes to governing documents that will bring greater visibility to their desire to disaffiliate with churches that do not handle instances of abuse properly.

A new standing “Credentials Committee” also will consider whether churches are not “in friendly cooperation” for that and other reasons, including involvement in “discriminatory behavior on the basis of ethnicity.”

Delegates, called messengers, also voted Tuesday (June 11) at their annual meeting to amend the constitution of the Southern Baptist Convention so that it will make explicit that churches that mishandle cases of abuse or racial discrimination are not welcome.

“I believe this is a very, very significant moment in the history of the Southern Baptist Convention,” said new SBC Executive Committee President Ronnie Floyd.

He said the nation’s largest Protestant denomination has “given a clear signal not only about what we believe about sexual abuse, but we also stand against all ethnic discrimination in the United States and around the world.”

The constitutional amendments will need to be considered a second time at next year’s annual meeting before they can become official. 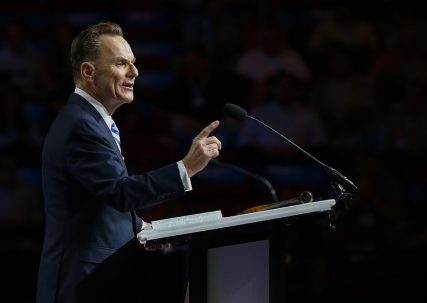 Moments after the votes, about 50 abuse victim advocates and media members attended a rally outside the Birmingham-Jefferson Convention Complex where speakers declared that what Southern Baptists accomplished inside was not sufficient.

Cheryl Summers, the organizer of the second annual For Such A Time As This Rally, said much has happened in the past year to address abuse in the SBC. She noted a new report from a Sexual Abuse Advisory Group commissioned by SBC President J.D. Greear and new training, including a video series and a handbook on a “caring well” theme, released last week.

She credited the work of activists and victims of abuse for prompting the denomination to act.

“People stood up and spoke up,” said Summers. “What we are doing matters. It is making a difference, so keep standing up. Keep speaking up. We will continue to speak for those who imagine they are the only ones living a private nightmare.”

Still, she said, there is much more to be done.

She and other advocates would like the SBC to develop a database documenting convicted and credibly accused abusers and to provide mandatory training to help clergy and seminary students recognize and address abuse.

In February, the Houston Chronicle and the San Antonio Express-News published a joint investigation of sexual misconduct allegations against about 380 current and former Southern Baptist ministers and volunteers. In late May, the Chronicle detailed allegations of cover-ups of abuse by five male missionaries. 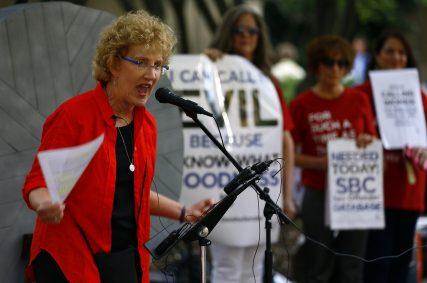 Christa Brown talks about her abuse at a rally outside the annual meeting of the Southern Baptist Convention at the Birmingham-Jefferson Convention Complex on June 11, 2019, in Birmingham, Ala. RNS photo by Butch Dill 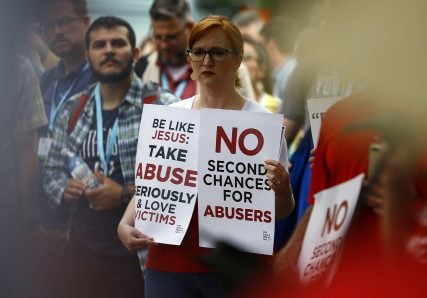 Sex abuse has dominated many of the discussions at events that have occurred around the SBC meeting.

Its Ethics and Religious Liberty Commission hosted a discussion on Monday in which survivors addressed how churches need to respect and assist survivors and report abuse allegations to authorities. Texas pastor Matt Chandler addressed concerns, raised in a New York Times story, that his church mishandled allegations about a youth minister who has since been indicted on a sexual molestation charge. Chandler defended the church’s response at a luncheon between Tuesday’s sessions of the SBC meeting.