BIRMINGHAM, Ala. (RNS) — Three women who experienced sexual abuse took center stage on Monday (June 10) to address how the nation’s largest Protestant denomination should deal with the issue.

And they didn’t mince words.

Susan Codone, a Birmingham native, said she was abused by her youth pastor while growing up in a Southern Baptist church. When she told her senior pastor what had happened, Codone said, the senior pastor abused her, leaving her nowhere else to turn. 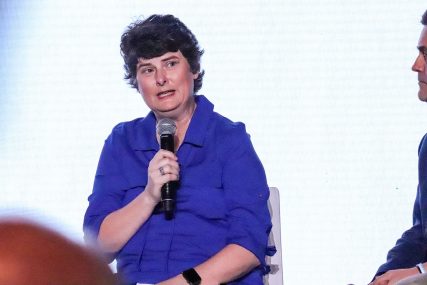 “The primary problem was that there was nobody else to tell,” said Codone, who revealed her story in a new report by a sexual abuse advisory group commissioned by Southern Baptist Convention President J.D. Greear.

She spoke about her experience in a public setting for the first time at a panel on abuse in the church, held on the eve of the annual meeting of the SBC.

Codone said victims need a trusted leader or church member they can confide in.

But those leaders can be hard to find, said Bible teacher Beth Moore, an abuse survivor and prominent speaker. In some cases, she said, survivors have been asked if they were raped. If the victim said no, then the questioner seemed relieved that the victim could still give a future husband her virginity.

That line of questioning is not acceptable, said Moore.

“What I want to say to my own family of Southern Baptists: Our family is sick. We need help,” she told a crowd of about 1,200 people who gathered in a hall of the Birmingham-Jefferson Convention Complex to listen to a panel on abuse in the church. “We have a very, very serious problem because we have this built-in disesteem for women and it’s got to change.”

Abuse survivor Rachael Denhollander said church leaders often try to handle abuse allegations on their own — but said they aren’t qualified to do so. Instead, she urged pastors to treat the revelation of an abused person in their church the same way they would if they discovered a dead body on their property. 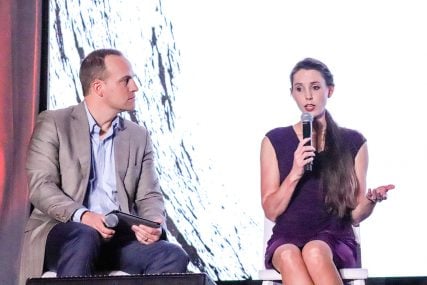 Rachael Denhollander, right, a lawyer and former gymnast who was the first woman to publicly accuse former Michigan State University and USA Gymnastics doctor Larry Nassar of sexual assault, speaks during a panel on sexual abuse in the Southern Baptist Convention at the Birmingham-Jefferson Convention Complex in Birmingham, Ala., on June 10, 2019. RNS photo by Adelle M. Banks

“Would you say, ‘I am the pastor. God has equipped me to handle all matters in this church, therefore I am going to investigate this’? Probably not,” said Denhollander, a lawyer and former gymnast who was the first woman to publicly accuse former Michigan State University and USA Gymnastics doctor Larry Nassar of sexual assault.

Instead, Denhollander said, a pastor would call the police.

“Do the same thing for sexual abuse,” she said. “Report it to the authorities.”

Occasionally, mostly female voices said “amen” or “yes” as they agreed with points made from the stage. At one point, a woman sobbed into the shoulder of the man seated next to her as Moore acknowledged the enduring pain experienced by the survivors who might be sitting in the audience or listening via Facebook Live.

The male leaders on the panel took turns supporting the women speakers.

Russell Moore, president of the SBC’s Ethics and Religious Liberty Commission, addressed the social media debate involving Beth Moore (no relation) in recent weeks. Some critics have said that Beth Moore, known as a Bible teacher rather than a preacher, had crossed a line by speaking at a church on Sunday morning.

“A Southern Baptist Convention that doesn’t have a place for Beth Moore doesn’t have a place for a lot of us,” he said, drawing applause. “The Bible gives us a beautiful picture of the way men and women need one another. And in the moment that we’re in right now, to suggest that the problem that we have is that women are speaking too much seems crazy to me.”

Greear said “it’s absolutely a fair critique” to say there’s been talk but not much action on addressing sex abuse. He thinks that could change at the meeting even as there is acknowledgment “there’s been failure here.”

Phillip Bethancourt, the ERLC executive vice president and panel moderator, noted one proposed change would create a new “Credentials Committee” that would handle inquiries into whether certain churches are not “in friendly cooperation” with the SBC because of how they’ve handled abuse, racial discrimination or other issues.

“We know that we want to move beyond just talk and towards action and that’s one tangible way that can happen even here in Birmingham,” he said.

Codone concluded the panel discussion by citing ways her life has changed as she traveled the uneasy road of a survivor. One of her abusers told her she would never go to college or marry, but she did both. On Monday, she and her husband, who was in the audience, celebrated their 30th wedding anniversary.

She said she admired but didn’t participate in the #MeToo movement because she thought she wanted to protect her privacy. But now, Codone said, she’d consider a new hashtag: #AllOfUs.

“I have a story but so do many of you in this room,” she said, noting that individuals can look for predators, vet new hires and educate people about long-term effects of trauma. “It’s going to take the entire church to deal with this problem.”