(RNS) — In the world of Bible teachers, Beth Moore is a rock star.

She packs sporting arenas and big-name churches. She has written dozens of best-selling books. She has an outsize social media following.

But among some of the male leaders of the Southern Baptist Convention, where she is a member, she has also become a liability.

After suggesting on Twitter that she was spending Mother’s Day preaching at a church — though she did not use the word “preaching” — a crowd of prominent Southern Baptist men charged after her.

“For a woman to teach and preach to adult men is to defy God’s Word and God’s design,” wrote Owen Strachan, professor of Christian theology at Midwestern Baptist Theological Seminary in Kansas City, Mo.

“There’s just something about the order of creation that means that God intends for the preaching voice to be a male voice,” piped in R. Albert Mohler Jr., president of Southern Baptist Theological Seminary in Louisville, Ky., in a podcast.

Josh Buice, pastor of a Southern Baptist church in Georgia, was even more explicit.

The title of his recent blog post: “Why the SBC Should Say ‘No More’ to Beth Moore.”

The uproar is part of a decades-old theological battle over the role of women that appears to be reigniting on the eve of the denomination’s annual meeting, which begins Tuesday (June 11) in Birmingham, Ala. 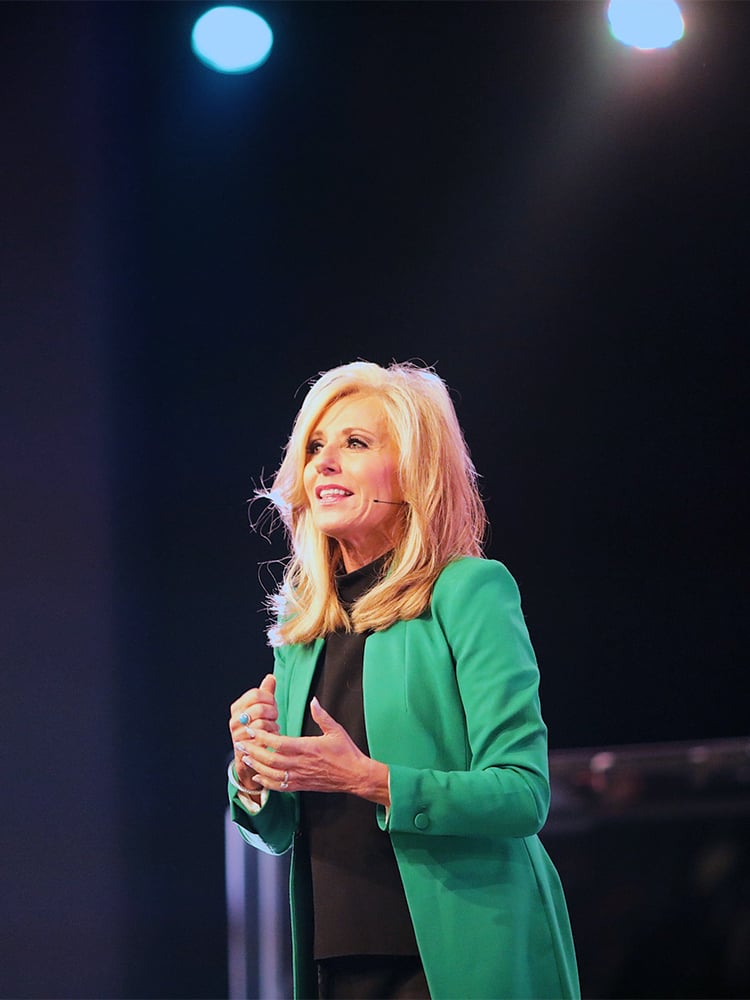 The Baptist Faith & Message, the SBC’s official statement of doctrinal beliefs, asserts that although men and women are created equal, they have different roles in marriage, family and the church, a position called “complementarianism.”

According to the document, which was amended in 1998 to include a section on the family, a wife “must submit herself graciously to the servant leadership of her husband.” Only men can serve as pastors of a church, a distinction added to the statement in 2000.

Religion News Service could not confirm whether Moore spoke at a church on Mother’s Day, and Moore declined an interview.

She did, however, preach, or she might say “teach,” at Transformation Church, a nondenominational megachurch outside Charlotte, N.C., this past Sunday (June 2).

“We had no idea that there was some kind of controversy brewing,” said Pastor Derwin Gray. “I’d been trying to get Beth to speak for years and her schedule finally opened up.”

Regardless, no one would deny Moore has preached before mixed audiences of men and women. And that has become a mounting concern among some — notably male — SBC leaders, who say it’s OK for women to preach to women, but not to men.

Moore, who is 61 and lives in Houston, has for years toed the line with Southern Baptist orthodoxy, carefully balancing her teaching role with the demands of Christian femininity as defined by evangelicals.

But the election of Donald Trump in 2016, and the pre-election debate over the now-infamous “Access Hollywood” tape, in which Trump boasted about groping women’s genitals, appeared to break something in her, especially after numerous Christian leaders appeared to condone the behavior as “locker-room talk.”

Moore, a survivor of sex abuse, tweeted recently that 2016 was a turning point. She also said she felt “compelled to my bones by the Holy Spirit – I don’t want to be but I am – to  draw attention to the sexism & misogyny that is rampant in segments of the SBC, cloaked by piety & bearing the stench of hypocrisy.” 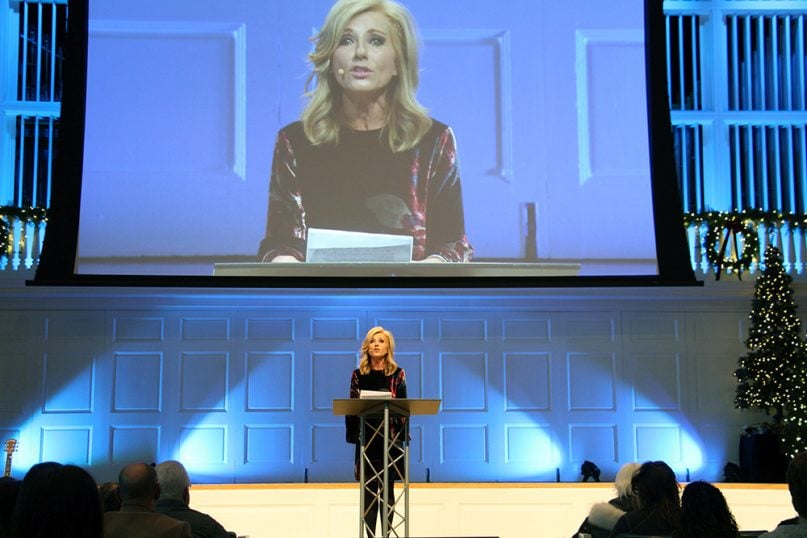 Beth Moore addresses attendees at the summit on sexual abuse and misconduct at Wheaton College on Dec. 13, 2018. RNS photo by Emily McFarlan Miller

That reproachful tone was new to Moore, who prior to the #MeToo movement had struck a more cheerful note.

“My hunch is that it’s precipitated a lot of soul-searching for her and for a lot of women like her, who have been willing to continue within a more traditional, gendered role,” said Nancy Ammerman, a professor of sociology at Boston University School of Theology. “Seeing the way that has been harmful to so many women has caused this kind of soul-searching.”

That more critical tone has been amplified by social media, especially Twitter.

Over the past decade, social media has given women a platform they never had. Moore, though she is not ordained, can speak as forcefully on Twitter as any of the ordained male leaders of the Southern Baptist Convention.

Indeed, she has the larger megaphone.

In recent posts, she has skillfully diverted attention away from the raging debate in an attempt to refocus on the gospel.

After the uproar over her Mother’s Day church appearance, she tweeted: “Troubled brothers, try to relax. I do not see a female takeover on the horizon. Have some herbal tea.”

Being asked by pastors & their elders on occasion to address their congregations does not mean that the woman -coming by their invitation, mind you -wants to pastor their church. Troubled brothers, try to relax. I do not see a female takeover on the horizon. Have some herbal tea.

“She’s trying to keep these debates secondary and just say, ‘Relax. Jesus is at the heart,’” said Kristin Kobes Du Mez, a professor of history at Calvin College who studies gender roles.

But while Moore’s detractors accuse her of “doctrinal drift,” it’s also clear that Southern Baptist views on complementarianism span a wide spectrum.

While most self-described complementarians agree that women may not pastor a church, many are more flexible when it comes to women teaching men, even preaching.

Moore has called herself a “soft complementarian.” She has pointed out that the Baptist Faith & Message says “the office of pastor is limited to men as qualified by Scripture,” a view she said she agrees with. That doctrinal statement is silent on the question of women preaching. 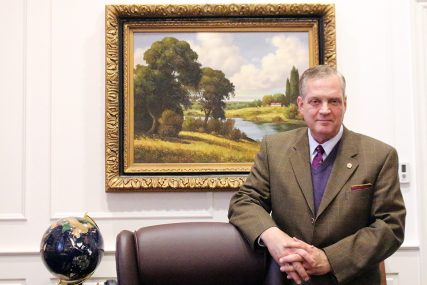 Mohler argues the clear teaching of the Bible is that women may not preach and he points to passages from the Apostle Paul, who wrote in 1 Timothy, “I do not permit a woman to teach or to assume authority over a man; she must be quiet.”

“I think that the best reading of the biblical passages, including in 1 Timothy 2, is that if it’s understood to be the authoritative teaching of the church then it should be done by men,” he said. “And not by any man, but men especially commissioned and recognized by the church for that task.”

Mohler said it was important to re-engage the issue of women’s roles because “there’s also the reality that you have a younger generation, especially of pastors and of young men and young women asking these questions anew, and so we’re going to have to deal with them.”

Meanwhile, Moore is scheduled to speak on a panel with SBC President J.D. Greear on the denomination’s sexual abuse in the hours ahead of its annual meeting next week in Birmingham. Baptists will consider an amendment that would allow the Southern Baptist Convention to remove from its ranks a church that covers up abuse, among other items on the agenda.

Greear said he hoped discussions about women’s roles would not overtake other issues the convention is facing.

“We should also not let these discussions distract us from what we must be talking about this Convention — responding to abuse and rising to the challenge of making our churches safe spaces for the vulnerable,” he told RNS in an email. 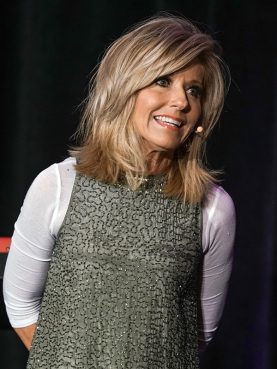 But at a Founders Ministries event on Monday just a few blocks from the SBC meeting site in Birmingham, another panel discussion is scheduled, titled, “Should Women Preach in Our Lord’s Day Worship?”

The panel is part of a daylong conference on “Mature Manhood in an Immature Age.” And for some Southern Baptists, that conference itself is intended to do just what the president of the SBC has tried to steer clear of.

“Why in the world are they holding another conference” the same week, asked the Rev. Wade Burleson, pastor of Emmanuel Baptist Church in Enid, Okla., and a frequent SBC critic. “It’s almost like they’re driving a wedge in the SBC over the issue of women.”

One thing appears certain: Beth Moore won’t be at the Founders Ministries conference.