(RNS) — A diverse band of faith leaders and at least one presidential candidate descended on a park outside the White House on Wednesday (June 12), gathering to decry what organizers called the “evil” policies of the Trump administration.

“We are here to talk about right versus wrong,” the Rev. William Barber II, co-chair of the Poor People’s Campaign, told hundreds of clergy and other people of faith gathered in Lafayette Square for a rally organized by Barber and Rabbi Arthur Waskow, director of the Shalom Center. 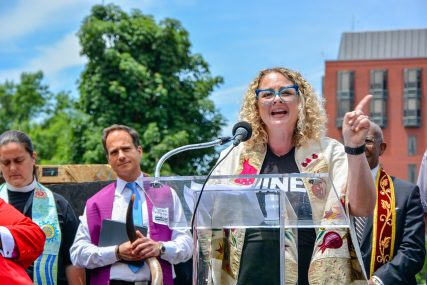 Rabbi Esther Lederman speaks during a rally protesting against President Trump’s policies outside of the White House in Washington on June 12, 2019. RNS photo by Jack Jenkins 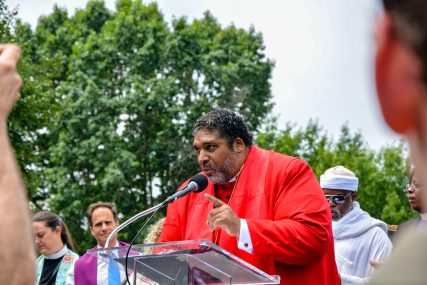 The Rev. William Barber II speaks during a rally protesting against President Trump’s policies outside the White House in Washington on June 12, 2019. RNS photo by Jack Jenkins

“We have come as a prophetic witness against what we are seeing in this nation, and to deliver a moral indictment against this president’s policies, this administration’s policies, the policies of his enablers, and the policies of the religionists who try to suggest that what is wrong is actually right,” said Barber, who is also president of Repairers of the Breach.

The rally began with an interfaith worship service that included representatives from Native American, Jewish, Christian, Muslim and other faith traditions at New York Avenue Presbyterian Church, who then marched toward the White House holding a banner that read “Moral Witness Wednesday.”

Waiting for them at Lafayette Square, which is across Pennsylvania Avenue from the White House, was presidential candidate Pete Buttigieg, mayor of South Bend, Ind. Buttigieg, who has spoken at length about faith on the campaign trail and expressed support for a “religious left,” was only attending the demonstration to bear “silent witness,” not to campaign, rally officials said. 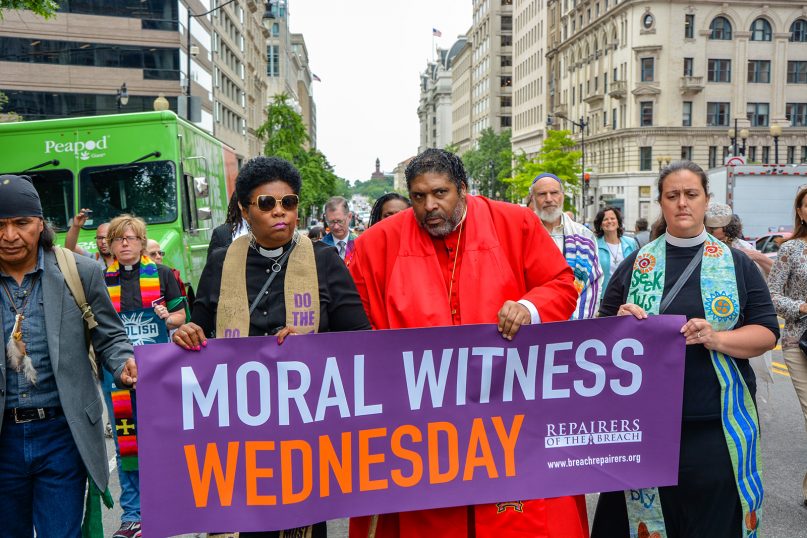 The Rev. Traci Blackmon, left, and the Rev. Liz Theoharis join the Rev. William Barber II during a rally protesting against President Trump’s policies outside of the White House in Washington on June 12, 2019. Theoharis and Barber are co-chairs of the Poor People’s Campaign. RNS photo by Jack Jenkins

When the crowd, which stretched more than two city blocks, arrived at Lafayette Square, where a stage had been erected for the rally, the Secret Service announced that the park was being closed for two hours without explanation. Access to Pennsylvania Avenue was also gated off.

A Secret Service spokesperson told Religion News Service the closure was a matter of “routine protective activities.” When asked, neither the spokesperson nor the initial announcement mentioned a security threat.

Undaunted, the faith leaders continued their demonstration on the sidewalk outside the park, with masses huddling around Barber and other leaders as speakers used a bullhorn to decry various Trump administration policies, focusing on issues such as the treatment of immigrants, climate change, the U.S. Census, and health care.

The Rev. Traci Blackmon, a Ferguson, Mo., pastor who protested against white supremacists in Charlottesville, Va., in 2017, discussed health care, gerrymandering and racism in her short speech, saying “America is not well” and that “we will be judged by how we have cared for the sick, how we fed the hungry, how we have sheltered the homeless, how we have welcomed the stranger.”

She later explained to RNS that she felt compelled to participate in the protest because “people of faith who are committed to the gospel” and other religious traditions have been “relegated to the left because we’ve been too quiet.”

She added, “We’ve never been a perfect nation … but we’re headed towards fascism and it is my role as a priest and a prophet to sound the alarm.”

Several speakers noted that the various faith communities shared many concerns. Wendsler Nosie, former chairman and councilman of the San Carlos Apache Tribe, noted that his faith is the “oldest religion of this country,” and he pointed to the overlap of Native American sacred land claims and environmental fights.

“Native Americans trust in you and this movement as long as it is spiritual,” he said. 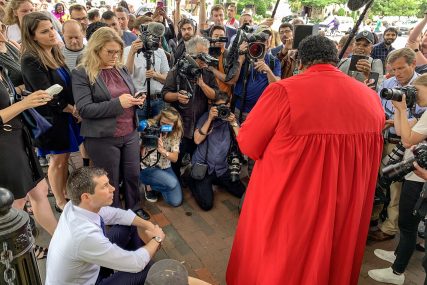 Buttigieg, whom Barber asked to move into the crowd while the faith leaders spoke, remained silent and observant during the proceedings, sometimes nodding in agreement with what was said.

At one point the Rev. Jacqui Lewis of Middle Collegiate Church in New York approached Buttigieg to thank him on behalf of the LGBTQ members of her congregation and named him as one of her “favorite candidates” running for office (she later clarified this wasn’t an endorsement). She then handed him her business card, which he accepted.

Buttigieg left after about 45 minutes and tweeted about the protest later that day, calling it “important” and “moving.”

Shortly after his departure, officials reopened the park, allowing the group to assemble around the stage, and the speakers continued their criticisms of the Trump administration. Rabbi Esther Lederman, director of Communities of Practice and Congregational Innovation for the Union for Reform Judaism, blasted the administration’s use of the Homestead Center in South Florida to house immigrant children.

“I’ve lost track of how many times we’ve spoken out against the moral crimes committed by this White House and this administration,” she said as a crowd of preachers roared in response. “But I’m not tired! We’re not tired! We can do this every day until every child is released from Homestead — and that is a promise, Mr. President!”

After the speakers finished in the park, a column of volunteers approached the White House fence in an attempt to deliver a petition that called on Trump and his administration to “repent for its sins.” But even as Park Service officers assembled to detain protesters, and the Secret Service blocked the area in front of the White House with a barrier, informing demonstrators that crossing it would be a felony.

Barber eventually led the volunteers as far as the makeshift gate, chanting, “Your administration is under indictment!” and “Your court chaplains are under indictment!” After a back-and-forth with police officers, participants eventually began taping their copies of the petition to the gate.

As protesters dispersed, Barber noted that the Poor People’s Campaign will host a “Moral Action Congress” in Washington next week that is slated to include speeches from several Democratic presidential candidates. He also explained that, while neither the protest nor his organization endorses candidates, they are nonetheless unashamedly “political” and plan to hold future protests.

“The (faith) leaders are not going away,” Barber told RNS. “We are announcing today that we must be conspicuous — now — in the public square.”