(RNS) — The Rev. Trina Bose North didn’t have a lot of ingredients to work with for a recent dinner party: lentils, chickpeas, rice, flour, a couple of spices and some sugar.

But things turned out all right. She and her guests made garlicky flatbread, lentils on rice and chickpeas fixed two ways.

There was even dessert.

Her foodie husband borrowed a tip from some vegan friends and combined the sugar with leftover water from the chickpeas to make meringue cookies.

The meal might not make it onto Pinterest or the pages of “Martha Stewart Living,” but it was filling, said Bose North, pastor of Crown Heights United Methodist Church in Oklahoma City.

Bose North and her friends are among more than 14,000 Americans participating in the Ration Challenge for the first time this year — many, this week around World Refugee Day (June 20). The global challenge — organized in the United States by Church World Service — asks participants to live for a week on the same food rations people receive at refugee camps. The idea is to raise awareness for the challenges refugees face and funds to support them. Participants ask friends and others to sponsor them by donating to the cause.

It also is a way to show support for refugees at a time when the U.S. refugee program is struggling. President Trump has set refugee admissions to the country at historic lows, said Mary Elizabeth Margolis, director of communications for the Immigration and Refugee Program at CWS.

Many people feel there isn’t much they can do to help, Margolis said. This is one thing they can do.

“It’s a way to show support in your communities and to start conversations and also to really make a difference by raising a couple of hundred dollars,” Margolis said. “If we all do that, it can have a huge impact.”

The Ration Challenge began in 2014 when co-founders Kaz McGrath and Ben Littlejohn visited a refugee camp on the Thai-Myanmar border through their work for Act for Peace, the international aid agency of the National Council of Churches in Australia. There, McGrath and Littlejohn met with refugees and saw the sparse rations they receive. 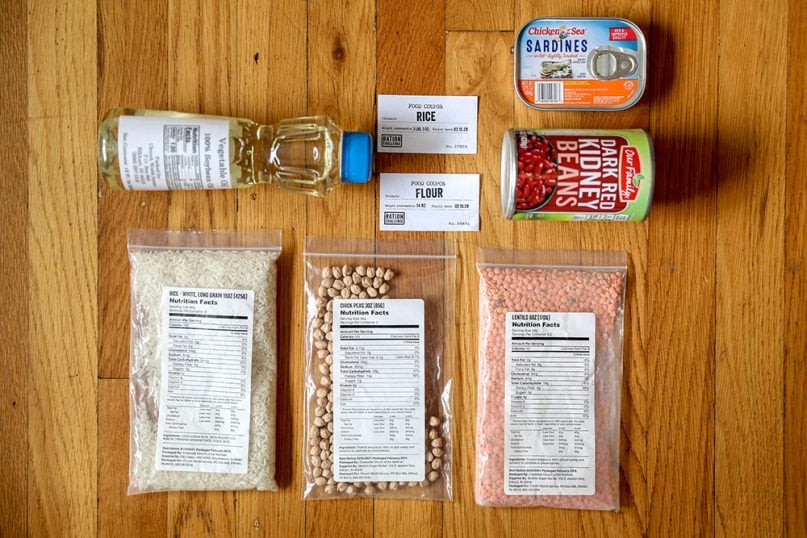 For a week, they decided to live on the same food to better understand the experience of living in a refugee camp.

Since then, more than 40,000 people in Australia and New Zealand have joined Act for Peace’s annual Ration Challenge, raising more than $7 million to support refugees.

CWS — one of nine agencies authorized to resettle refugees in the U.S. — was anticipating as many as 8,000 Americans might sign up for the challenge in its first year stateside, according to Margolis. Already, more than 14,000 have signed up from all 50 states, donating more than $264,000 as of Monday (June 17).

About $2 million has been raised so far this year by the challenge.

So many Americans registered to take part that CWS ran out of ration packs to send participants. The organization posted a list of what’s included in the challenge online so others can do it on their own.

The packs for the challenge include the same rations received by a Syrian refugee living in a camp in Jordan: small bags of rice, chickpeas and lentils; a tin of sardines; flour; a can of beans; and a bottle of oil.

Participants can earn additional ingredients for their meals by raising money for CWS and sharing about the challenge. The Syrian conflict, which started in March 2011, has led to hundreds of thousands of Syrians fleeing their country. The situation escalated in 2013 and again in 2015. It is estimated that over 1 million Syrian refugees have now fled to Jordan. Photo courtesy of Ration Challenge

The funds raised by the Ration Challenge will provide food rations, medicine and education for Syrian refugees in Jordan.

CWS also is among a number of faith-based organizations advocating on Capitol Hill for specific measures to help refugees.

That includes the Grace Act, which would set the minimum number of refugees admitted to the U.S. each year at its historic average of 95,000. Current U.S. law allows the president to set the limit on how many refugees are admitted. Trump has set that number at just 30,000 for the current fiscal year, which ends in October.

CWS also supports the No Ban Act, Margolis said, which would repeal and prevent efforts to ban Muslims, refugees and asylum-seekers from entering the country.

“There’s a strong sense among the communities where we work that we have a responsibility to do something to respond to that and that protecting families is a fundamental value regardless of where those people come from or what their religious affiliation is,” Margolis said. 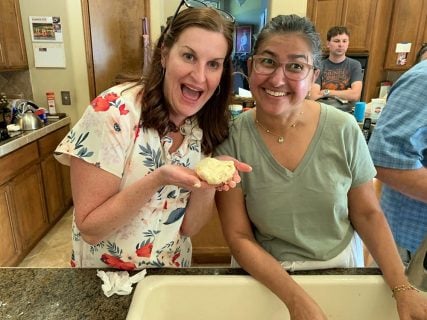 Melanie Smith, left, and the Rev. Trina Bose North show off their flatbread-making abilities while participating in the Ration Challenge in Oklahoma City. Photo courtesy of Trina Bose North

At Crown Heights United Methodist Church, a team of coaches for the Ration Challenge has set up a temporary office and reaches out to participants throughout the week with tips and encouragement.

Bose North spoke during a recent service at the church about her experience taking the challenge. Members of several refugee families who attend Crown Heights shared their stories as well.

For the pastor, taking the Ration Challenge is one small way she can live out her Christian beliefs.

“The call on all of us is to serve the least and the lonely among us, and refugees are some of the world’s neglected and forgotten people. To raise awareness, to provide help for refugees is absolutely what I’m called to do as Christian,” Bose North said.

The challenge forced her to think of others’ experiences — so drastically unlike her own — in a way that was different from reading about the refugee crisis or seeing images in the news, she said.

“You can read it, and that gets into your head, and you can write a check, and that affects you on a different level, but, man, to really experience it,” she said. “There’s something to be said about the experiential piece of this.”