(RNS) —  “I can’t concentrate on your sermon because you’re so pretty.”

“You do a really good job. But I think Scripture is more meaningful if read with a male voice.”

“I keep picturing you naked under your robe.”

For female ministers in the North Carolina Conference of the United Methodist Church, comments like these are just part of the job.

Now a new video, produced by the conference and shown at its annual meeting last week (June 12-15), features male ministers reading aloud some of the most remarkable sexist comments, hoping to illustrate what female clergy contend with on a daily basis —  both from male clergy and male congregants.

The United Methodist video follows one made by the North Carolina Synod of the Evangelical Lutheran Church in America last year titled “Seriously? Actual things said to female pastors in the NC Synod.” The North Alabama Conference of the United Methodist Church also used the tactic in a 2016 video titled “Her Truth.”

After the success of the Lutheran synod’s video last year, conference leaders first thought to show the Lutheran version. When they decided to produce their own and sent out an email to women ministers asking them to submit comments anonymously, the response was voluminous.

If the object was to make United Methodists uncomfortable with the sexism that female ministers routinely experience, it achieved that goal in the responses of male clergy who read the remarks. Many squirm and roll their eyes as they read out loud the words the women ministers submitted. (The female ministers did not read the comments themselves because it might betray and shame their congregants.)

“I guess they should wear Amish dresses all the way to the floor,” added another.

The United Methodist Church has allowed women to be ordained for more than 50 years and the first woman elected bishop was in 1980. But attitudes about women’s leadership have lagged, not only in the denomination, but also in the larger Christian world. 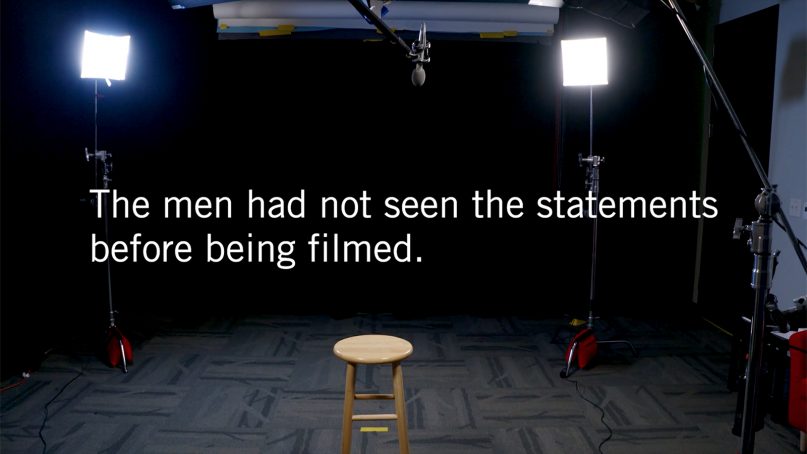 Even in denominations that permit women to serve as ministers, women haven’t achieved parity in ordinations and appointments. The North Carolina Conference is led by a woman, Bishop Hope Morgan Ward, but women account for a little less than 30 percent of its full-time ministers — 116 ordained women, compared with 283 ordained men. The conference, as the United Methodists call their regional bodies, spans the eastern half of North Carolina.

But as the video showed, those who are able to fulfill their call to ministry still face discrimination, a fact that appalled, disheartened and disgusted the male clergy in the video.

“It hits home for me as an African American pastor for comments I’ve experienced myself or innuendoes. But these were outright demeaning.”

The Rev. Chrysti Dye, who chairs the local conference’s Commission on the Status and Role of Women, said it was far more powerful to hear the men read the statements because it also shows their response.

“Very few people outside of female clergy are aware of the extent and pervasiveness of that kind of objectifying,” she said.

And men aren’t the only offenders, she said.

She recalled a comment she got from a female congregant after speaking about repentance on Ash Wednesday, one of the most somber and reflective days of the Christian year.

“You know, I was just watching you up there and all I could think was, ‘good hair,’” the female congregant told Dye, now senior pastor of Millbrook United Methodist Church in Raleigh.

Dye said the response to the video has been positive.

“There’s a collective hope that you’re lifting the veil on a culture in society and in the church of demeaning women, sexualizing them and objectifying them,” Dye said. “We want to wake up everyone.”