On a recent trip to Utah I found a treasure trove: a collection of century-old issues of Improvement Era and Young Woman’s Journal, with the whole set of 19 issues going for under $100. I’ve had a wonderful time learning more about the Church of Jesus Christ of Latter-day Saints 100 years ago–including the evolution of temple garments.

I already knew, thanks to Ardis Parshall’s excellent blog Keepapitchinin, that individual retailers used to produce temple garments for sale before the Church took over exclusive production and distribution. And I understood from Devery Anderson’s fascinating Development of LDS Temple Worship: 1846–2000 that garments used to resemble full-on union suits.

But it’s one thing to know that with my head, and another thing entirely to see garments for sale over a hundred years ago from competing retailers who hawked their wares in Church publications right alongside ads for Jell-O (yes, that was apparently a Mormon obsession even then) and fire insurance. 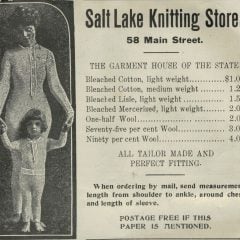 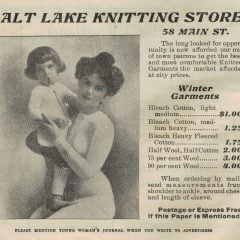 Not yet advertised as temple garments, and the front closure does not seem to have the mandated ties.

But are these temple garments, or just undergarments? The jury is out at this point; historians, please weigh in with your thoughts. It doesn’t make sense to me to show a young child wearing them, they’re not advertised as temple garments, and they don’t seem to have the front ties that were at that time mandated as the approved method of closure.

By 1913, the Salt Lake Knitting Store had some healthy American competition . . . and was presenting a more overt connection to the temple in its ads. All three companies touted the fact that their garments were Church-approved (and in fact the SLKS claimed it was the “only” provider of approved garments, competitors notwithstanding). 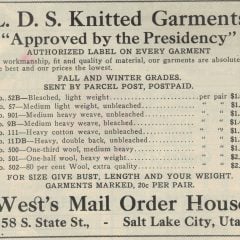 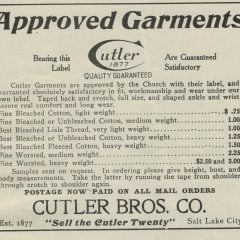 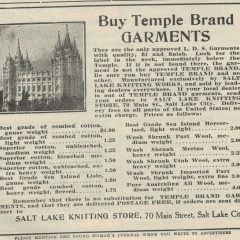 So, we’ve got multiple retailers by 1913, but no more pictures. I’m not sure if this is just due to the particular periodicals I’m looking at, or if the Church had by this time begun requesting that garments not be depicted.

We do know what garments looked like in 1913, though, because of what President Joseph F. Smith said about them in 1912. He admonished that members were not to shorten the length of garments, which went all the way to the ankles and wrists, to the knees or elbows to accommodate the “foolish, vain” fashions of the world;  the full-length pattern that had been in use for more than 70 years was “revealed from heaven.” If it was good enough for the pioneers, by golly, it was good enough for him.

You know that saying in Mormonism that change happens funeral by funeral? That might be the case here. Joseph F. died in 1918, and in 1923 the new president, Heber J. Grant, allowed for exactly the accommodation that Joseph F. had decried in 1912. Women’s, and then men’s (in 1930), patterns were changed to allow a shorter knee-length, elbow-length for everyday use if members so chose. In the temple itself, however, all members still wore the traditional style until the 1970s.

Here are a couple of last ads from the late teens and early 1920s, when the ankle-length garment was still de rigueur: 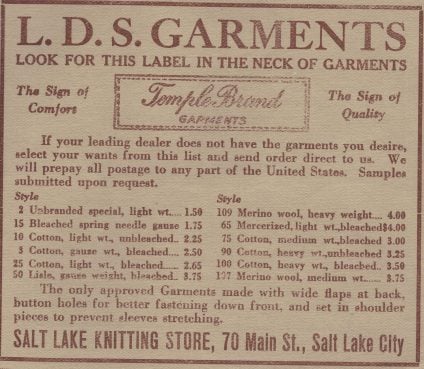 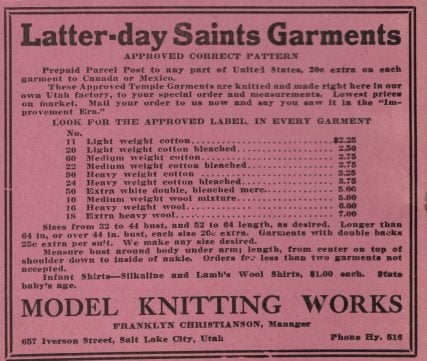 I’m intrigued that the ad on the left boasts that the SLKS’s garment has button holes for better fastening, which the Church did not actually authorize until 1923 — that was when the garment was shortened, the collar eliminated, the crotch closed (I don’t even want to know), and the old tie-strings jettisoned in favor of modern buttons. Maybe the Church’s policy was simply catching up to the alterations that members and retailers were already putting in place? Were members going rogue?

Garments have changed further since the 1920s, accommodating — albeit slowly — the changing fashions of the world. In 1979, the Church moved from a one-piece garment to a two-piece pattern . . . and women everywhere rejoiced.

Just within the last few years, garments have changed for the better yet again, with vastly improved fit and fabrics (see here for my review of last year’s changes). Most people I know received the changes with jubilation and relief, though some expressed anxiety about why something so sacred was not fixed in stone.

It’s been said that the only constant is change, but I’d add to that another constant: people who are anxious about change. So I’ll close with what the Salt Lake Tribune had to say in 1923 when Pres. Grant changed the garment so significantly:

While minor modifications of the temple garment, it is said, have been made at various times during past years, the latest order in permission is regarded by younger members of the church as most liberal and acceptable. Among the older membership the optional change is variously received. Some of the pioneer stock look upon any deviation from the old order as a departure from what they had always regarded as an inviolable rule.

The more things change, the more they stay the same.

Postscript 6/25: Historian Ardis Parshall of Keepapitchinin had this to say on Facebook: “The knitting stores sold lots of items, not just temple garments. The pictures were of ordinary underwear – I think certain leaders would have had conniptions if actual temple garments had been pictured – but it was understood and sometimes explicitly stated that these companies sold temple garments and that that’s why they were advertising in the church magazines.” Thanks, Ardis!