(RNS) — There aren’t many cruise “experience” directors who spend their days defending what is described as America’s Judeo-Christian heritage and promoting “nation-ism” — a version of nationalism that champions “the right of self governance and the right of people to be self-governed.”

But Michael O’Fallon does, and he argues both are under attack by the Open Society Foundation, founded by billionaire philanthropist George Soros. He often says as much on his website, Sovereignnations.com, as well as through conferences with speakers who range from controversial psychologist Jordan Peterson to a slate of evangelical Christians of the Calvinist variety.

And when he has some spare time, he goes on a cruise — like a recent journey to the Galapagos Islands, which O’Fallon recently highlighted on his personal Facebook page.

“On a strikingly blue day, we came ashore to hike and explore the home of Marine Iguanas, the Galapagos Albatross, the Blue-Footed Booby, the Red-Footed Booby, the Magnificent frigatebird and the ever-present Pacific seals,” wrote O’Fallon, who is both CEO of Sovereign Nations and owner of Sovereign Cruises and Events LLC, which runs vacation excursions for religious and political groups, alike. 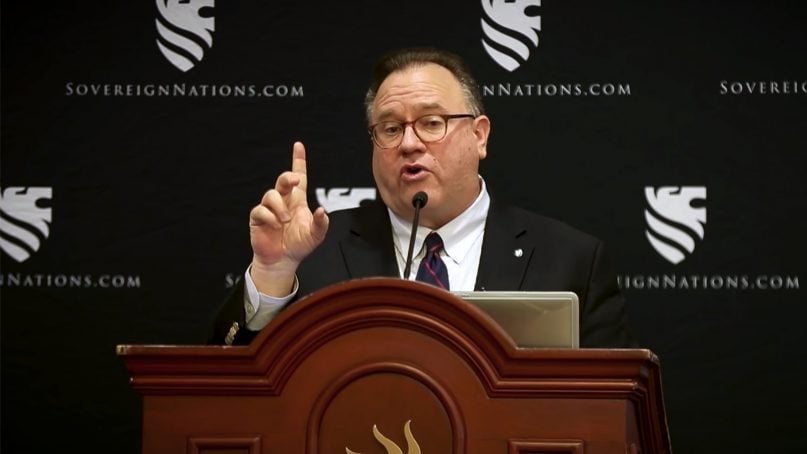 Michael O’Fallon speaks during a session at CPAC 2019. Video screenshot

Unpacking the enigma of O’Fallon offers a window into an emerging pantheon of leaders who sometimes mix an affinity for nationalism with forms of conservative Christianity — particularly a certain brand of Calvinism — while railing against progressivism, claims of social justice and prominent liberal donors.

O’Fallon has some experience mixing religion and politics. Sovereign Cruises has organized ship-based conferences that range from “Christian cruises” (which seek to “Honor the Lord”) to “patriotic cruises” (where participants are encouraged to “reclaim our nation’s heritage”).

According to O’Fallon’s LinkedIn page, Sovereign Cruises has operated since at least 2003, and its website includes a 2010 listing for a cruise headlined by conservative pundit and former Ambassador Alan Keyes entitled “Tea Party at Sea.” Keyes also headlined a 2012 “Patriot Cruise,” according to Sovereign’s website.

O’Fallon told Religion News Service he has “separated” himself from the cruises endeavor to devote more attention to Sovereign Nations, which was founded in 2017.

“I still have some interest in Sovereign Cruises, but I’m not the sole entity,” he said.

He suggested this is largely because Sovereign Nations is far more explicit than the cruise work when it comes to expressing a political vision for America. In a 2017 article published on the conservative website WND.com, O’Fallon praised Trump and championed “sovereign nationalism,” all while decrying the influence of the Open Society Foundation.

O’Fallon told RNS he now prefers the term “nation-ism” instead of nationalism. But his criticism of Soros, whom he accused of attempting to influence progressive movements within multiple faith groups, remains sharp. 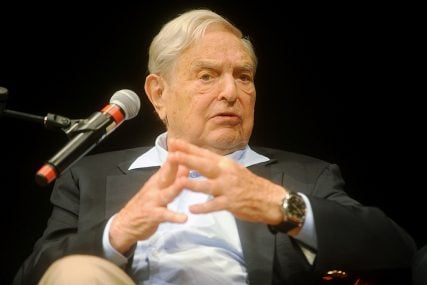 “Why have the Judeo Christian concepts of freedom and liberty been thrown into the ash heap of history as the nations of the earth sprint toward the chains of global manipulation?” O’Fallon wrote in his WND article. “Will the United States succumb to open borders and the manipulation of leftist billionaire George Soros?”

The “About Us” section of the Sovereign Nations website is even more overt and positions O’Fallon’s organization as a direct counter to the work of Soros.

“As can be seen over the past 8 years, the goal of Open Society Foundations is to demean and destroy the tenets of traditional conservatism and thus create a crisis of conscience within the mind of the conservative,” it reads. “In order to succeed, we must rebuild the confidence in the presuppositions of conservatism in all of its exercised forms including in economics, civil liberties, family, sovereignty, theology, rule of law, and foreign affairs.”

The reference to theology is key to much of O’Fallon’s recent work. His organization often mixes both religious and political world views, especially how the two play out within evangelical Protestantism.

His ventures tend to have a Calvinist bent: Several speakers at Sovereign’s conferences are part of what’s known as the “Reformed” or “Reformed-Baptist” subset of evangelical Christianity. This group is heavily influenced by a conservative interpretation of the 16th-century French theologian John Calvin. John Fea, professor of American history at Messiah College, explained that the Calvinist stream of evangelicalism has long caused rifts within the Southern Baptist Convention, the nation’s largest Protestant denomination. There have been debates in the past between what he called “a more free will, revivalist approach” and Calvinists who stress concepts of predestination — or that God chooses certain people to go to heaven long before they are born.

More recently, some Calvinist Baptists with ties to O’Fallon have been critical of discussions about social justice in the SBC.

O’Fallon called “social justice” — or at least liberal claims to it — a threat to the gospel.

“I think, to a man, we can all say that this is one of the greatest concerns and greatest issues that has been against the gospel and against the church of Jesus Christ certainly since the Reformation,” he said while introducing the panel earlier this year.

Speakers at Sovereign Nations conferences are often distinct even from their fellow Calvinists, however. Fea pointed to multiple divisions within the broader scope of Calvinism, with some avoiding explicitly political work altogether.

“They believe that the church is in the business of preaching the gospel and saving people and getting them into heaven,” Fea said. “There’s no other major responsibility of the church than to proclaim the word of God and the gospel.”

O’Fallon said he differs from some of his Calvinist compatriots when it comes to political engagement.

“I would say that I am not a pietist in that sense,” he said. “I believe in engaging in politics, where a lot of reformed Baptist folks would not.”

The Reformed thinkers O’Fallon often invites to his events include Thomas Ascol, president of Founders Ministries, which he founded with other Baptists in 1982. 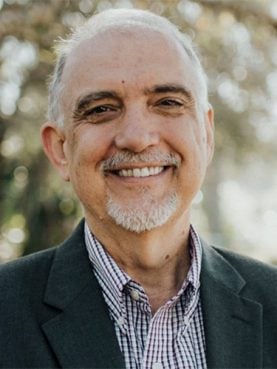 Ascol, who said he is a longtime friend of O’Fallon, told RNS that he does not ascribe to tidy definitions of nationalism, nor does he consider his work explicitly political. He declared in 2002 that his group has “never had a political agenda.” But he also delivered a talk under the banner of Sovereign Nations at the 2019 Conservative Political Action Conference — a prominent annual gathering of conservatives in Washington, D.C.

During his talk, delivered in front of a Sovereign Nations backdrop, Ascol railed against what he described as the creeping influence of progressivism within evangelical Christianity, likening it to a demonic assault.

“The devil has effectively enticed many churches to welcome godless ideologies into their environs, and he’s done it through the Trojan Horse of what is commonly called ‘social justice,’” he said.

Ascol told RNS he is especially concerned with how claims of social justice have “infiltrated” the Southern Baptist Convention and said that Russell Moore, president of the SBC’s Ethics and Religious Liberty Commission, has shown “failures in leadership” regarding topics such as women preaching.

“I think Russell Moore has not done a good job,” he said.

Ascol said Founders Ministries convened at least two cruises through O’Fallon’s group, one of which focused on Calvinism. He described them as a “bible conference on a boat.”

Alpha and Omega Ministries head James White — who identifies as a Reformed Baptist theologian — has also spoken at Sovereign events. He frequently decries intersectionality, an idea often invoked by liberals to describe the overlapping concerns and experiences of oppressed populations, as a threat to a Christian way of life and criticized what he called the “woke church movement.”

RNS asked White for comment but was unable to speak to him before press time.

It is unclear how much, if any, influence the group has within the SBC, but speakers at Sovereign Nations’ 2019 conference were united in their opposition to certain claims of “social justice” among progressives — including progressive people of faith. In December 2018, Ascol, O’Fallon and White were all listed as initial signers on a “Statement on Social Justice & the Gospel.” 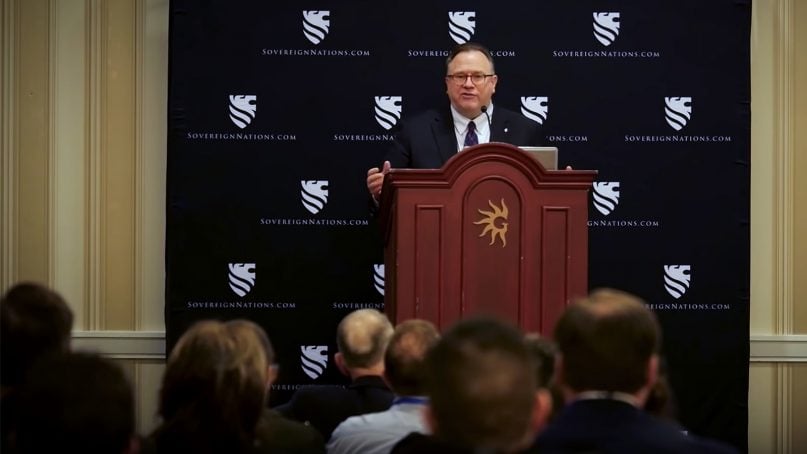 “We are deeply concerned that values borrowed from secular culture are currently undermining Scripture in the areas of race and ethnicity, manhood and womanhood, and human sexuality,” read the statement’s introduction. “The Bible’s teaching on each of these subjects is being challenged under the broad and somewhat nebulous rubric of concern for ‘social justice.’”

The 2019 Founders Ministries conference was sponsored in part by Sovereign Alliance (an umbrella organization that includes Sovereign Cruises) as well as Ligonier Ministries, a group created by Presbyterian Church in America theologian R.C. Sproul. (O’Fallon and his wife worked for Sproul’s ministry for 10 years.)

But O’Fallon pushed back on the idea that his movement is restricted to Calvinist Baptists.

He noted that the 2017 Sovereign Nations’ conference, which was convened in the Trump International Hotel in Washington, D.C., included a talk by controversial psychologist Jordan Peterson on “Identity Politics & the Marxist Lie of White Privilege.” Sen. Ted Cruz (R-Texas) and former White House Senior Advisor Stephen Bannon were also invited to speak but did not appear to attend.

Brad Vermurlen, a scholar who has a forthcoming book on the New Calvinist movement entitled “Reformed Resurgence: The New Calvinist Movement and the Battle Over American Evangelicalism,” said the invitation of Jordan Peterson points to an often unspoken overlap between his audience and that of the Calvinist leaders highlighted at Sovereign Nations events. 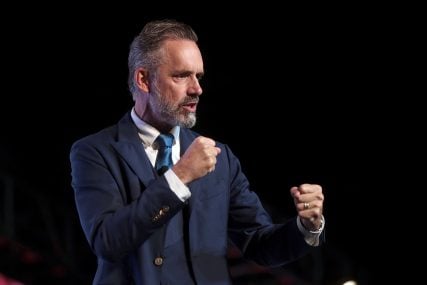 Vermurlen noted that White’s and Ascol’s criticisms of social justice, postmodernism, critical race theory and other topics closely match ones articulated by Peterson, who is known to be especially popular among young white men.

“One thing that I think flies under the radar too much is the influence of Jordan Peterson on this entire conversation,” Vermurlen told RNS. “I don’t see that admitted among evangelical leaders that, if not they themselves, then at least their young male congregants are watching Jordan Peterson on YouTube. They’re being influenced by him whether we talk about it or not.”

Ascol said that he didn’t know much about Peterson, but he agreed with many of his arguments — something he attributes to “common grace.”

Richard Flory, senior director of research and evaluation at the University of Southern California’s Center for Religion and Civic Culture, believes O’Fallon and other leaders who support Sovereign Nations feel their place in society is at risk.

“Social justice is the popular thing now on college campuses, and that represents a threat because it means ‘People that don’t look like me and don’t think like me might be in charge of me,'” he said. “That’s the most crass way to say it, but I think that’s really what’s underneath all this.”

For his part, O’Fallon said he hopes to invite thinkers who share a different worldview to future conferences. He insisted that his goal is to challenge ideas, not demonize people.

“One thing that I’ve always been really concerned about making sure that I do is create platforms where people that have polemic concepts can come together, and, in a non-ad hominem fashion, debate squarely and fairly the ideas that they have,” he said.

News
For insurrectionists, a violent faith brewed from nationalism, conspiracies and Jesus 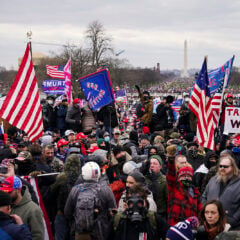 Opinion
Evangelicals must denounce the Christian nationalism in Capitol riots 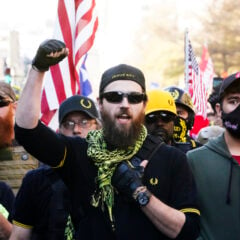