SRINAGAR, India (RNS) — In his starched kameez pajama and a blue turban —vestments of distinction in this northernmost part of India — Sartaj Sofi holds the gaze of over 500 devotees during Friday prayers.

“We need to follow the teachings of Islam to practice sound ecology in our valley,” says the 30-year-old religious preacher, his voice rippling through the large prayer hall.

Sofi’s sermons, though impeccably religious, vary from tradition in one surprising detail. For three years, Sofi has been one of a growing number of preachers in the Kashmir Valley to sensitize the local Muslims to eco-consciousness through an appeal to their faith.

“Years of violence and state surveillance have depleted our natural resources, along with climate change,” said Sofi. “Ordinary people are now turning to religion,” he said.

There are more than 7,500 mosques and seminaries in the Muslim-majority Kashmir Valley, of which more than 6,000 are of the Hanafi Sunni order. Another approximately 200 are shrines of the mystical Sufi sect of Islam.

Since 1947, the majority-Muslim region of Kashmir has been caught between India and Pakistan, which emerged as two sovereign states after the wrenching end of colonial rule by Britain. The nuclear-armed neighbors have fought two wars here, which both claim in full but control in part. 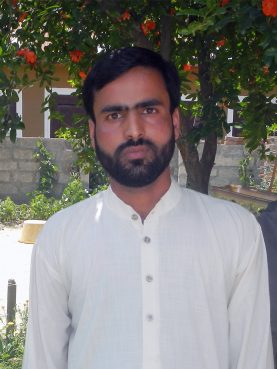 After years of conflict that has harmed the valley’s natural beauty, the locals here have more faith in religious preachers like Sofi to protect their heritage than they do the government, explained Farooq Ahmed, an imam from Srinagar.

“Civilians are distrustful of government programs since they haven’t stopped activities such as deforestation, soil erosion and extinction of biodiversity in Kashmir,” said Ahmed.

In particular, locals blame government apathy and corruption for the state of Dal Lake, an urban waterway once hailed as a jewel in the crown of Kashmir, that is now a weed-clogged swamp.

Illegal encroachments and sewage disposal in the lake have imperiled the livelihoods of the owners of shikaras, colorful wooden houseboats that lodge tourists, as well as the vegetable sellers who make their living along the lakeshore.

Ghulam Rasool Dar, a boatman who has spent more than 70 years around Dal Lake, says the absence of a proper anti-pollution program is due to the unstable political situation in Kashmir.

Moreover, in the last two decades or so, security forces have allegedly cleared vast tracts of forestland to prevent militants from taking cover in the forests.

One result of the deforestation in recent years has been the unprecedented floods that have killed more than 300 people in 2014, as hundreds of villages, bridges and roads were washed away.

The Centre for Science and Environment, a research and advocacy group in Delhi, attributed the floods to “unplanned urbanization, encroachments, climate change and a lack of preparedness.”

Shaheena Parveen, a government municipal committee president in Bijbehara, a town outside Srinagar, defended the local government’s efforts to reverse the effects of the conflict. “The government is working tirelessly to boost Kashmir’s economy, tourism and environment. Years of conflict have derailed the state.”

Since 2015, the government has dispatched mobile vans in neighborhoods around Srinagar to spread eco-consciousness; shiny billboards and hoardings with verses from the Quran are more commonly seen in villages and towns; and street theater has gained popularity.

But imams in the Bijbehara town said people’s crisis of faith has increased since the 2014 floods, and they continually blame the government for never rising above conflict.

“People are therefore inclined to disengage with government programs since they are hollow promises. They are looking to faith leaders for solutions,” said imam Farooq Ahmed.

“The floods were the flashpoint,” says Pir Masood-ul-Haq, an administrator at the Hazratbal shrine in Srinagar, widely considered the holiest Muslim shrine in Kashmir. “The calamity spurred us to sensitize people at shrines and mosques about conserving our environment.”

Masood-ul-Haq has taken to teaching the nearly 50,000 devotees who congregate at the white marble shrine each Friday how a strict ascetic discipline can restore Kashmir’s natural diversity. He makes his case by citing Sheikh Noor-ud-Din Wali, a 14th-century Kashmiri Sufi saint who founded the Rishi movement, promoting harmony with nature in ways that seem to anticipate contemporary responses to climate change. 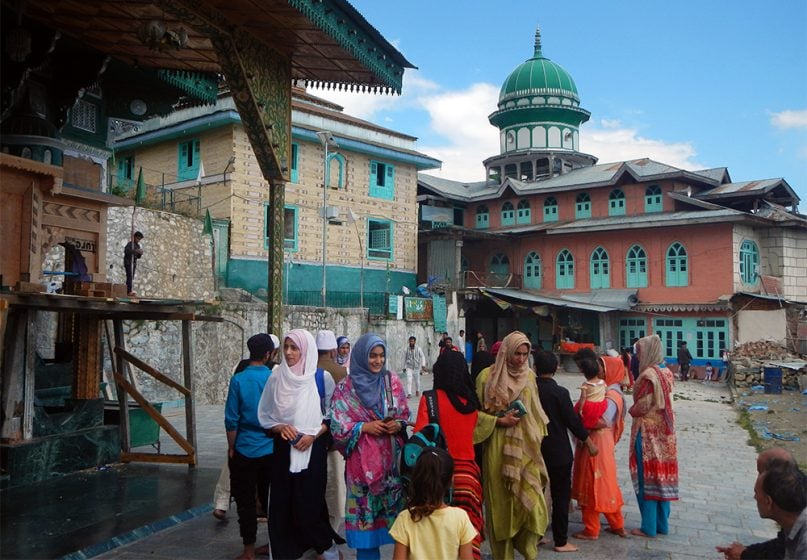 Muslim devotees at the Aishmuqam Shrine, near Anantnag District of Kashmir Valley, India, where a sermon on environmental conservation was held on June 21, 2019. RNS photo by Priyadarshini Sen

The Rishis would plant fruit-bearing trees wherever they went and espoused non-violence, based on their view that religion should primarily focus on man’s treatment of his fellow beings.

Their eco-consciousness, Masood-ul-Haq said, “comes not from focusing on the afterlife as religious leaders have done, but by cultivating a strong spiritual tradition in this life like the Rishi order.”

Inspired by the Rishi’s ethic, Kashmiri religious leaders are mobilizing action to prevent use of plastics, fossil fuels and pesticides.

Besides the appeal to ancient philosophies, the imams’ environmental push is relying as well on the urgency felt by young Kashmiris. “There’s a spurt in religiosity among the youth who see mosques and shrines as platforms to reach a wider audience at the grassroots level,” said Fayaz Ahmed Rather, an administrator for the Jammu and Kashmir Muslim Waqf Board, a local religious charitable endowment.

“Mosques have been used for socio-political ends in our conflict-ridden society,” said Asif Hussain Wani, a student at an industrial training institute near Srinagar. “But now, we see them as powerful vehicles to spread environmental consciousness.”

It is no coincidence that Sufis are leading voices in the green movement here. Fayaz Rather, who also preaches at a mosque in Aishmuqam that is dedicated to a key Rishi figure, believes that the ecological crisis arises from a modern faith in science over a characteristic Sufi asceticism.

In the days when “people relied on mythologies and ancient texts over scientific knowledge,” said Rather, care for the environment was a given.

That sometimes abstruse connection between faith and the planet, however, has recently trickled down to NGOs and academics, who have begun collaborating with religious leaders.

Since last year, the Community of Education, Research and Development, an NGO in Kashmir’s Anantnag district, has convinced more than 20 imams to start the conversation on “environmental spirituality” in cities, towns and villages.

“Many anthropogenic activities and policy paralysis have destroyed Kashmir. We want to regain our paradise,” said Aabid Hussain Mir, the organization’s president.

Azra Nahid Kamili, a professor of environmental science at the University of Kashmir, says scientists are also working closely with religion scholars and preachers.

In 2017, the Central University of Kashmir organized an international conference on conservation of the environment and the role of religion, where theologians and religious leaders were invited from the United States, Bosnia and India.

Amid all the emphasis on religion, Sartaj Sofi says that environmental consciousness is a matter primarily of the welfare of Kashmiri society.

“It’s important to remember what Sufi saint Sheikh Noor-ud-Din Wali had said in the 14th century. Our food will last as long as forests last.”