(RNS) — This week, the largest Israel lobby group in the United States, Christians United for Israel, will hold a two-day “summit” in Washington, D.C., featuring high-profile speakers such as Vice President Mike Pence and Secretary of State Mike Pompeo. Many of the event’s attendees and featured guests will profess their abiding love and support for Israel and Jewish people.

In reality, right-wing Christian supporters of Israel like CUFI pose a grave danger to the safety and well-being of both Jews and Palestinians, as well as to hopes for a true and lasting peace in the Holy Land. Anyone who actually listens to CUFI’s leader, the Rev. John Hagee, will be horrified at the meeting’s toxic blend of anti-Semitism, racism, homophobia, Islamophobia and sexism.

Hagee and his more than 5 million followers believe that the establishment of Israel in 1948 and its subsequent military occupation and colonization of Palestinian and other Arab lands are the fulfillment of biblical prophecy and the necessary precursors to the return of Jesus Christ and the coming of the apocalypse.

Once this final theological drama begins, they believe, gentiles and Jews will be judged, and those who accept Jesus as the Christ will be saved, and all others will be condemned to the eternal fires of damnation. Everyone else is expendable, including the Jews they claim to love so much.

Hagee and the rest of his triumphalist crew actively pursue their conviction that all Jews must return to Israel and rebuild a Jewish Temple in the Noble Sanctuary mosque complex in occupied East Jerusalem (one of the most sensitive religious sites in the world). That done, they will convert to Christianity or face death.

In Christian Zionist theology, Israel can’t be divided into two states for the sake of peace; Jerusalem must be united under Israeli control. Non-Jews (meaning Palestinians) must be expelled. 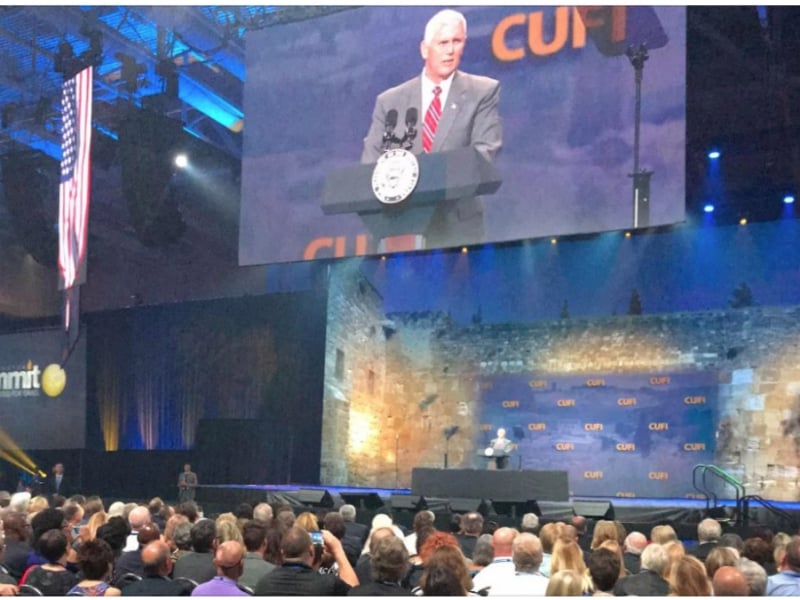 While their support for Israel is supposed proof that their program is not anti-Semitic, CUFI’s adherents’ interest in Israel is little more than a declaration that Jews are only useful insofar as they trigger the end of days. Palestinian suffering — including that of Christian Palestinians who come from some of the oldest Christian communities in the world — has no meaning in Christian Zionist belief.

This kind of pseudo-fundamentalist theology has long been the basis for white supremacy and colonialism, which relied on the concept that it was the “white man’s burden” to save people of color from themselves. It was this same political religious fervor that sought to tame “savages” in the Americas.

Those of us whose faith leads us to envision a future that promotes human dignity, safety and security across all borders must actively resist the efforts of CUFI and other white supremacist organizations in the United States to advance their dangerous, regressive agendas.

Thankfully, millions of Americans, including Jews, Muslims, Christians, Buddhists, Hindus, Sikhs and people of humanistic faith, realize that the foundations of a just society are built upon values that uphold the human rights of every single citizen. We recognize that militarism, racism, poverty and climate disaster are systemic ills that we must address together, as a matter of faith, so that our children can live.

As we seek healing and repair for the harms of the past, we cannot tolerate organizations that promote theologies built on hatred and exclusivity. This is not the way forward. We have sacrificed enough children on the altars of white supremacy. No more.

How can a political and theological agenda refuse to see the humanity, sacredness, and suffering in the other and yet still claim to be religious?

This is what CUFI does. It supports Israel at all costs, without question or criticism, while ignoring the great injustices against Palestinians in Israel and the occupied territories based upon the anti-Semitic theological/political idea that Jews must be restored to “their homeland” in order for the Second Coming of Jesus to occur.

As clergy and people of deep faith and conscience, we do not know a God that ignores or justifies the suffering of one group of people for the security and comfort of others. We do not know a God that justifies in any form or fashion the oppression and subjugation of others. We call on Americans of all beliefs to stand in support of Palestinians struggling for their long-denied freedom and against the kind of dangerous pseudo-religious extremism that CUFI represents.

(Rabbi Lynn Gottlieb chairs the board of Interfaith Movement for Human Integrity and is a member of the Rabbinic Council of Jewish Voice for Peace. Rev. Graylan Hagler is senior pastor of Plymouth Congregational United Church of Christ in Washington, D.C. and director and chief visionary of Faith Strategies. The views expressed in this commentary do not necessarily represent those of Religion News Service.)