WASHINGTON (RNS) — As he prepared for the State Department’s second summit on global religious liberty next week, Sam Brownback, the U.S. ambassador on religious freedom issues, defended the event against critics who say that the first summit failed to accomplish more than creating new statements about helping religious minorities.

In a telephone briefing with reporters on Friday (July 12), Brownback, the U.S. ambassador-at-large for international religious freedom, cited efforts in Iraq, where a partnership that includes the U.S. Agency for International Development has begun to assist “the redevelopment and repopulating of northern Iraq by Yazidis and Christians that had been run out during ISIS.”

He also pointed to the International Religious Freedom Fund, established at last year’s ministerial to help religious persecution victims, for which the department has collected millions of dollars from donors. He said money from that fund was “offered in Sri Lanka after the Easter bombings,” in which more than 250 people were killed in terrorist attacks on churches and hotels.

The ambassador painted the summits as catalysts for interfaith understanding and support.

“Our effort is to stir actions. We want to see really a global grassroots movement around religious freedom,” said Brownback. “We want to get the various faiths to bind together and to stand for each other’s freedom of religion.” 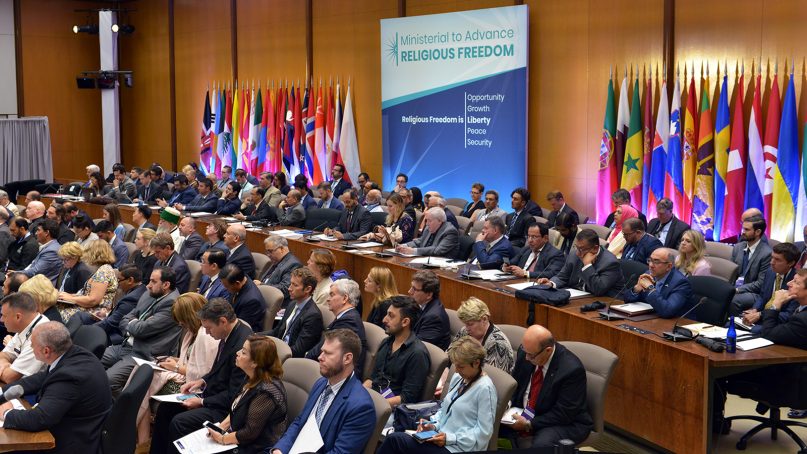 Participants at the 2018 Ministerial to Advance Religious Freedom at the U.S. Department of State in Washington on July 24, 2018. Photo by State Department/Public Domain

He said the focus of the July 16-18 Ministerial to Advance Religious Freedom will be on mutual respect but not a common approach to theology.

“There is no common theology in this discussion, but it is towards a common human right,” he said.

“And that human right is that everybody is entitled to be able to practice their faith peacefully and without fear.”

Brownback said the summit will be “the biggest religious freedom event ever held in the world,” with two days of discussions among religious leaders and civil society activists and a final day with as many as 115 invited foreign ministers. 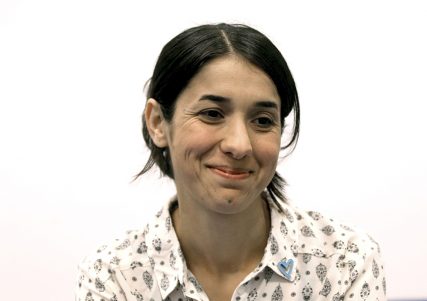 The gathering, a successor to a first-time event last July, will also feature first-person stories of survivors of religious persecution, including Nadia Murad, a Yazidi and former Islamic State group captive from northern Iraq who was a co-recipient of the Nobel Peace Prize, and Pastor Andrew Brunson, an American who was freed this year after a two-year detention in Turkey.

The plans have so far failed to convince some religious freedom watchdogs, who say the first gathering failed to live up to its billing, that the summit will lead to substantive results.

Shaun Casey, director of Georgetown University’s Berkley Center for Religion, Peace & World Affairs, said the first ministerial appears to have “made no difference” in U.S. foreign policy for persecuted religious minorities around the globe.

“You look at what’s happened to Rohingya and you look at what’s happening to Uighurs in China,” said Casey, the special representative for religion and global affairs at the State Department during the Obama administration. “There’s been no attempt to address the mass migration, if not the genocide, of Muslims in Myanmar.”

H.A. Hellyer, a senior associate fellow at the Royal United Services Institute, a think tank on international security, said the success or failure of the ministerial will relate to the State Department’s current policies.

“The new commission on ‘unalienable rights’ is simultaneously being cast as another step in the administration’s culture wars,” said Hellyer, who also is the nonresident senior fellow of the Washington-based think tank Atlantic Council. “As such, I am not convinced this ministerial is going to deliver on any promises it may make.” Nadine Maenza, left, commissioner of the U.S. Commission on International Religious Freedom, speaks at the April 29, 2019, event when USCIRF released its annual report in Washington, D.C. Commissioner Tony Perkins is on the right. RNS photo by Adelle M. Banks

Nadine Maenza, a commissioner of the independent U.S. Commission on International Religious Freedom, argued that the first ministerial “raised the level of conversation” about global religious liberty far beyond Washington. In the last year, she has spoken with government officials in Egypt and civil society leaders in Indonesia, Thailand and Bahrain, where dialogue has become “just a natural thing” and less confrontational.

But she thinks Brownback and Secretary of State Mike Pompeo are seeking long-lasting results from the ministerials and that it will take time.

“I really see them looking for long-term changes and how to help countries to want to move toward religious freedom,” she said. “But it is hard to measure in a year.”

The ministerial comes less than a month after the State Department released its 2018 international religious freedom report. At that time, Pompeo announced that his department is elevating both the office for the envoy addressing anti-Semitism and the Office of International Religious Freedom. He said the reorganization would provide the offices with additional resources and staff and “empower them to better carry out their important mandates.”