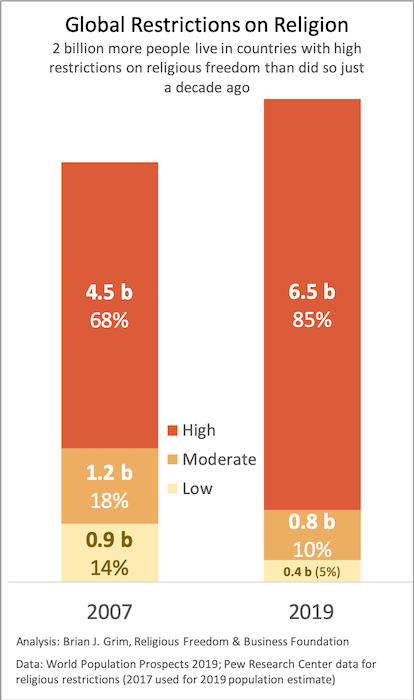 Two billion more people live in countries with high restrictions on religious freedom than did so just a decade ago.

Two billion more people live in countries with high restrictions on religious freedom than did so just a decade ago, according to an analysis by the Religious Freedom & Business Foundation (RFBF) of a report released today by the Pew Research Center. The dramatic decline in religious freedom impacts not only peace and stability but also slows global economic growth, according to RFBF.

RFBF’s analysis of Pew’s study finds that 83 countries today have high or very high levels of government restrictions and/or social hostilities, but because some of these countries are very populous, such as China and India, 6.5 billion people — or 85% of the world’s 2019 population of 7.7 billion — live today in countries with high restrictions on religious freedom.

These new findings echo those of a 2014 study by researchers at Georgetown University and Brigham Young University found that religious freedom is one of only three factors significantly associated with global economic growth, controlling for two-dozen different financial, social, and regulatory influences.