FORT WORTH, Texas — Dr. Kent Brantly sat on his counselor’s couch and wept.

The tears came last summer as the Christian physician visited with Dottie Schulz, a missionary care volunteer with Texas-based Mission Resource Network, which is associated with Churches of Christ.

“Dottie, I think I’m ready to move forward,” confided Brantly, who made global headlines five years ago when he contracted the Ebola virus while treating patients in Liberia and nearly died.

Brantly, who earned a Bible degree from Abilene Christian University in Texas before deciding to become a doctor, always knew he wanted to return to the mission field. But while he regained his full physical strength within four to five months, other healing has taken longer.

“It’s been five years of emotional healing and spiritual healing and growth,” the doctor, 38, told The Christian Chronicle in an interview at the Southside Church of Christ in Fort Worth, his family’s home congregation for much of the last decade. “I think we’ve grown and been equipped in ways during this five years that we were not before we went to Liberia.” A week or two after his meeting with Schulz, Brantly got a call from Dr. Lance Plyler, director of World Medical Mission, the medical arm of the evangelical humanitarian aid organization Samaritan’s Purse.

On July 26, 2014, Plyler had stood at Brantly’s bedroom window in Liberia and confirmed the worst: “Kent, bud. We got your test results. And I’m really sorry to tell you it is positive for Ebola.”

Now, Plyler was calling to see if Brantly and his cousin Dr. Stephen Snell — who had talked and dreamed for years about their families serving as medical missionaries together — might move to Zambia.

Plyler cited a need for doctors at Mukinge Mission Hospital, a 200-bed facility in a rural area about 100 miles from the nearest supermarket. It’s about three hours from Zambia’s border with Congo.

For the first time since Brantly overcame Ebola as the world watched, the opportunity — and the timing — seemed right.

“We’ve spent time praying and fasting and talking together about it … and God has really opened the doors every step of the way,” said Brantly, who with his wife, Amber, a registered nurse, and their two children, ages 8 and 10, will make the move to the south-central African nation this fall.

Said Schulz: “I am excited for them. They are finally doing what, in their hearts, they have wanted to do for a long time.”

From 2014 to 2016, the Ebola outbreak in West Africa claimed 11,325 lives, according to the World Health Organization.

Brantly, who woke up sick on July 23, 2014, credits prayers and antibodies for his recovery.

He received one of the first doses of ZMapp, an experimental drug that seemed promising in trials involving monkeys but had not been tested on humans.

On Aug. 1, 2014, he was flown to Emory University Hospital in Atlanta, where doctors were able to see that his potassium level was low and replenish it — something that could not have been done in Liberia and could have killed him, as Brantly noted at the time.

“Today is a miraculous day,” Brantly said as he was released from the hospital on Aug. 21, 2014, after nearly a month in isolation. “I’m thrilled to be alive, to be well and to be reunited with my family. … God saved my life, a direct answer to thousands and thousands of prayers.”

After leaving the hospital, Brantly focused on using his newfound celebrity to call attention to the Ebola crisis.

He and Amber met with President Obama at the White House.

Brantly’s face appeared on the cover of Time as the magazine named “The Ebola Fighters” as its 2014 Person of the Year.

“For the next few years after I recovered, we really tried to use the platform to call for help for the people of West Africa,” Brantly said, “and to share the message with all of society, but particularly with the church, of the importance of choosing compassion over fear.” But by the end of 2017, Brantly intentionally stepped back.

He began turning down most public speaking engagements. He focused on teaching in the residency program at John Peter Smith Hospital, which serves Fort Worth’s poorest residents, and caring for low-income patients at the Stop Six Clinic on the city’s east side.

Meanwhile, the couple moved into an apartment complex full of refugees and immigrants.

Amber Brantly volunteered with World Relief, a Christian refugee resettlement organization, and Be The Bridge, which promotes racial reconciliation in the church.

“I think in the last five years, God has really equipped her with some passions but also some skills that are going to be so beneficial in our work in Zambia,” Kent Brantly said of his wife of 11 years, a fellow ACU graduate whom he first met on a medical mission trip to Honduras. She declined an interview request. People ask Kent Brantly if he believes God saved him for a reason.

Or if he feels compelled to make a difference because he lived while so many others died.

He struggles with the answers.

“To suggest that there was something about me that made God choose to save my life while he allowed 11,300 other people to die, I’m not really OK with that,” he told the Chronicle. 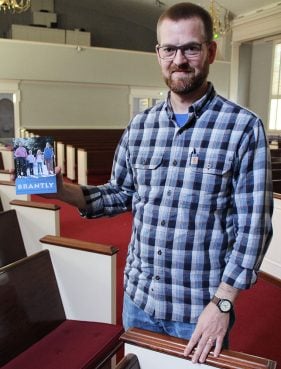 Dr. Kent Brantly at the Southside Church of Christ in Fort Worth, Texas. RNS photo by Bobby Ross Jr.

After reflecting a little more, Brantly boiled his feelings down this way: He’s grateful to God for saving his life. That gratitude inspires him to “live a life that is faithful to the calling he’s given me.”

“Right now, I think that means moving my family to Zambia to serve at a Christian mission hospital — to serve the poor and have compassion for the people in need and to participate in God’s work of making all things new and fixing the broken things in this world,” he said, not stopping to take a breath as he listed more and more reasons.

The Southside church will serve as the Brantly family’s sending congregation.

“Kent and Amber are great people, and the whole time they’ve been here, they’ve just always been trying to find ways to prepare themselves and equip themselves to engage in medical missions,” Southside preacher Steve Cloer said. “So it’s exciting to see that dream coming back around.

“I told the church, ‘The last time we sent Kent and Amber out, God did amazing things, and I have no doubt that he will do so again this time.’”

The Brantlys will partner with an organization called Christian Health Service Corps, as will Snell and his wife, Amy, who also have two young children with a third on the way. The Snells, both graduates of Harding University in Searcy, Ark., are members of The Hills Church of Christ in North Richland Hills, Texas. 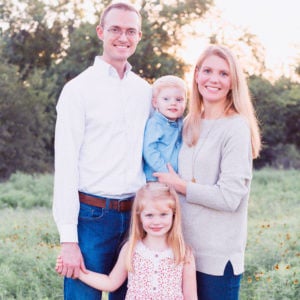 Kent Brantly and Stephen Snell grew up together. In summer 2012, both worked with Brantly’s uncle, Dr. Frank Black, at Chimala Mission Hospital in Tanzania.

“It was the best month of my four years of residency,” Snell said, “just getting to be in that place with the Brantlys, facing those tough circumstances, caring for those very sick patients, being there in the trenches … with teammates and somebody with whom you could laugh and cry and just process all the different challenges and emotions.”

Joining those families in Zambia will be Madison Stone, a Southside member and Harding graduate. Stone will teach the Brantly and Snell children.

The team members have committed to serve at least two years at Mukinge Mission Hospital.

The Snells previously worked at Mukinge from 2013 to 2015. The Brantlys never have visited Zambia. But they hadn’t stepped foot in Liberia either before they moved there.

“We’re trusting that God has opened the doors, and he’ll pave the way,” Kent Brantly said.

With a laugh, he added, “If there’s running, heated water, we’ll be fine.”