WASHINGTON (RNS) — Most Americans know what an atheist is and why Christians celebrate Easter.

Three in 10 overestimate the percentage of U.S. adults who are Jewish or Muslim.

But few could state that the Vedas are prominent Hindu scriptures. 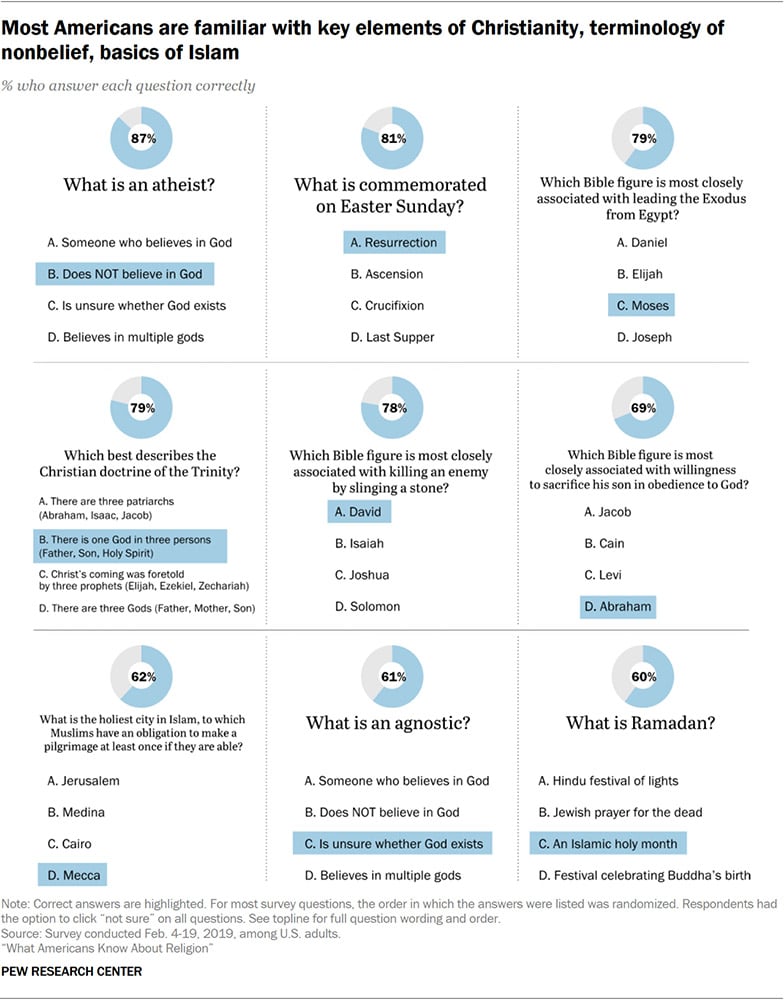 “Most American are familiar with key elements of Christianity, terminology of nonbelief, basics of Islam” Graphic courtesy of Pew Research Center

A new report on American religious literacy released on Tuesday (July 23) by Pew Research Center reveals some of what Americans do and don’t tend to know about their own faiths and others.

“I was struck, for example, that just 1 in 5 American adults knows that Protestantism, not Catholicism, traditionally teaches that salvation comes through faith alone,” said Greg Smith, associate director of research at Pew and one of the primary researchers for the report.  “I was struck that only about a quarter of Americans know that Rosh Hashanah is the Jewish New Year.”

The report was based on a survey of 10,971 respondents who answered online multiple-choice questions about religion.

Eighty-seven percent of Americans surveyed correctly responded that an atheist is someone who does not believe in God. Eight in 10 know that Christians celebrate their belief in Jesus’ resurrection on Easter Sunday and that Moses is the biblical figure most closely associated with the exodus of Jews from Egypt.

But less than 1% of respondents got a perfect score on the 32 survey questions centered on the Bible; elements of Christianity, Judaism and other world religions; atheism and agnosticism; and religion and public life. The survey, which drew on the expertise of Boston University scholar Stephen Prothero, author of “Religious Literacy,” is not a definitive courselike test on religion, but rather a snapshot of knowledge about certain topics, Smith said.

Jews, atheists and agnostics scored highest — with each getting answers correct more than half of the time. Evangelical Protestants also had high scores compared with other groups. 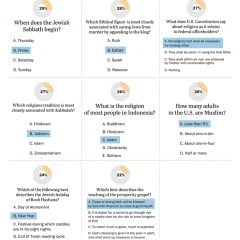 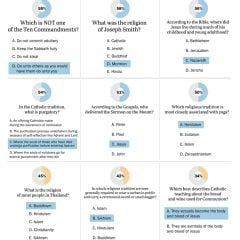 “Roughly half of Americans know Jesus delivered the Sermon on the Mount, that yoga has roots in Hinduism” Graphic courtesy of Pew Research Center

In 2010, atheists and agnostics, Jews and Mormons got the most questions right on a Pew survey about religious literacy. But researchers emphasized that differences in the two surveys — including how questions were asked and answered (for example, online instead of by phone) — prevent direct comparisons.

There are a number of factors linked to people’s religious knowledge, from their education — both in academic and religious settings — to the range of individuals with whom they may socialize.

Researchers found that those who answered more questions correctly are generally more likely to feel warmly toward people of other faiths.

Jews were viewed most warmly overall, with a “mean thermostat rating” of 63 on a scale of 0 to 100. Atheists and Muslims tied for the lowest point on that scale, with a rating of 49. While Buddhists, Hindus, mainline Protestants and other groups also tended to get average warmer ratings from those who did well on the religious knowledge survey, evangelicals were the exception to that rule, Smith said.

Overall, the average respondent answered 14.2 of the 32 questions correctly.

Evangelical Protestants (5.2), Mormons (5.1) and Jews (4.8) answered the most biblical knowledge questions correctly. Americans overall got an average of 4.2 of those seven questions right.

Atheists (4.2), evangelicals (4.1) and agnostics (4.1) were the highest performers on questions about Christianity. Americans overall answered an average of half of those seven questions correctly. 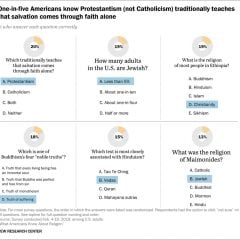 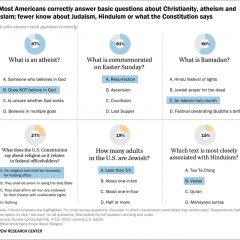 Slightly more than a quarter of Americans surveyed answered the sole constitutional question correctly, saying there is no “religious test,” or requirement to embrace a particular belief or religion, to hold public office.

Pew has scheduled a discussion at its Washington headquarters on Wednesday featuring Prothero and Diane Winston, author of “The Oxford Handbook of Religion and the American News Media.” Pew’s report includes an opportunity for readers to test their own religious knowledge with an interactive quiz.

The survey, conducted Feb. 4-19, had an overall margin of error of plus or minus 1.5 percentage points.

Other findings, on average: 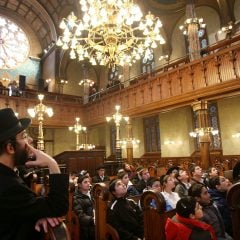