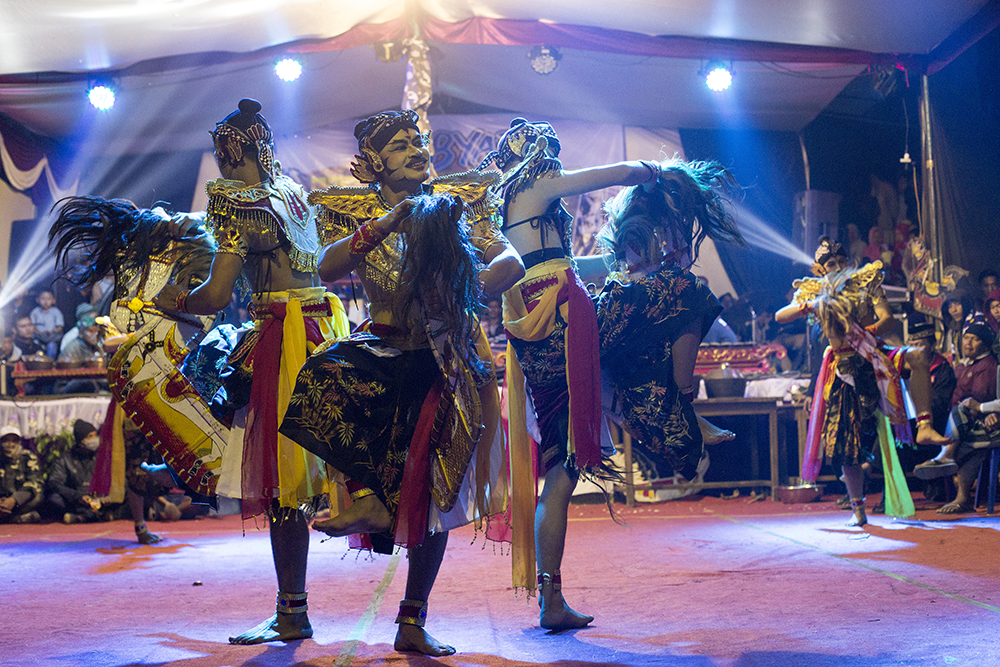 The choreographed movements of the Jaran Kepang are intense, and a performance can last up to several hours, leaving the dancers drained of energy, some even collapsing while exiting the stage. RNS photo by Alexandra Radu

WONOTIRTO, Indonesia (RNS) — Across this majority-Muslim country, the end of Ramadan is an occasion for celebration. But in this small village in Central Java, it is also an auspicious time to honor one’s ancestors in a festival called Haul. As is often the case in Javanese culture, the celebration is a mixture of Islam, Hinduism and animist traditions. The entire village of Wonotirto participates in a Haul ceremony, paying their respects to the founder of the area and to their ancestors, in Central Java, Indonesia. RNS photo by Alexandra Radu 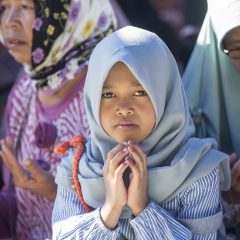 A girl prays with her family during a Haul ceremony. RNS photo by Alexandra Radu 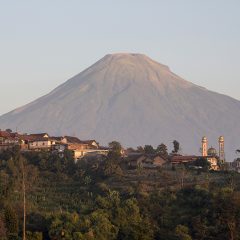 Early in the morning the villagers congregate on a small hill near the cemetery. The call for prayer quickly draws a few hundred people dressed in holiday clothes. RNS photo by Alexandra Radu After communal prayers end, people visit family and friends in the community. “We have more visitors on the Haul celebration than we do on Eid al-Fitr. Friends and family from far away villages come by,” said Dini, who had more than 40 visitors at her house during the two-day celebration. “We started cooking two days ahead, because we cooked both for our household and for the public events.”  RNS photo by Alexandra Radu

Haul honors all the village ancestors, as well as Kyai Iriq, who founded the Wonotirto community hundreds of years ago. 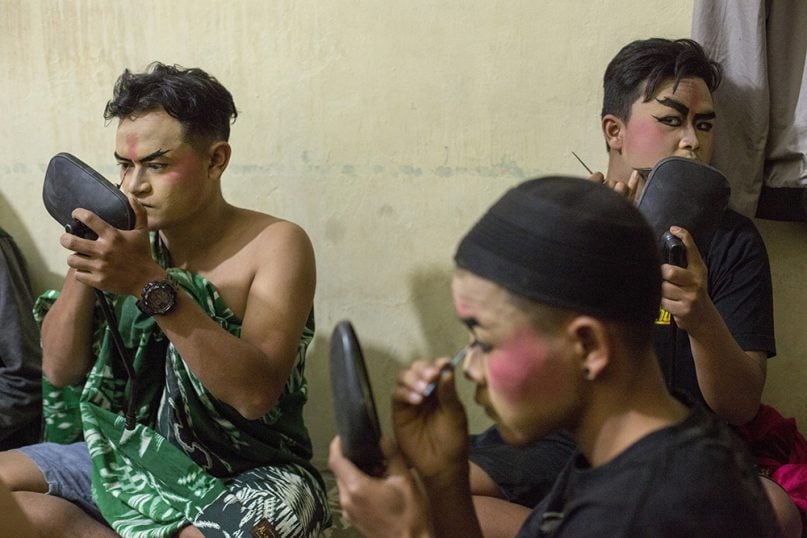 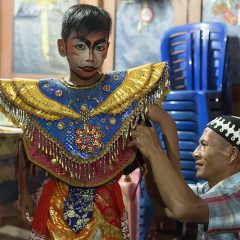 Dancers of all ages participate in Jaran Kepang. Children, starting around 12 years old, usually have their own group dances choreographed by experienced dancers from the adult dance group. RNS photo by Alexandra Radu 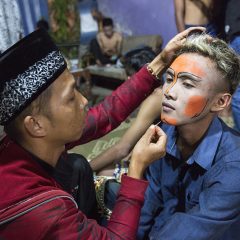 Villagers apply makeup to performers before the beginning of the Jaran Kepang dance in Wonotirto, Indonesia. The vivid makeup and heavily decorated costumes harken back to Hindu mythical stories. RNS photo by Alexandra Radu A Singa Barong, a powerful mythical creature that is brought to life by the dancers during some of the Kuda Lumping performances, lies on the ground after being blessed with rose water ahead of the dance. The rattan horses have also been sprinkled with rose water and blessed by the pawang, the master of ceremonies, to facilitate the arrival of the spirits. RNS photo by Alexandra Radu

The ancestral spirits are invited to the Haul celebration through a dance called the Jaran Kepang (Kuda Lumping, Kuda Kepang or Jathilan in other regions). Jaran Kepang dances re-enact the great deeds of local ancestors with the dancers sometimes entering trances during the performance, their bodies believed to be temporarily inhabited by ancestral spirits. 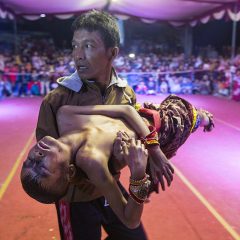 A man carries a young dancer off the stage after the pawang. RNS photo by Alexandra Radu 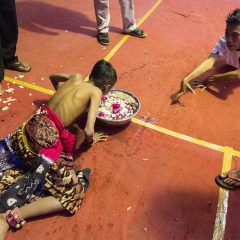 Soon after the Singa Barong enters the Jaran Kepang dance, three of the dancers become entranced, a sign that the ancestral spirits have received the offerings. They start crawling and shaking uncontrollably, drinking the blessed rose water and feeding on the offerings. RNS photo by Alexandra Radu 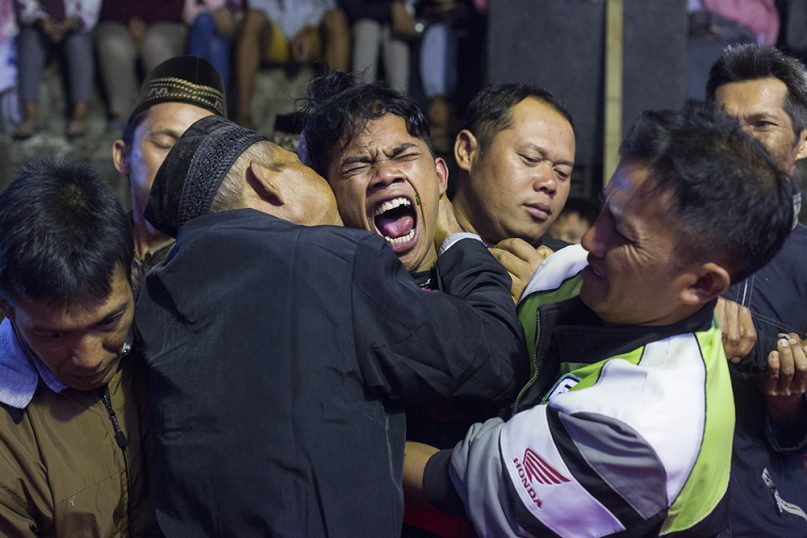 The wellbeing of the possessed dancers is insured by the pawang, who give them items from the offering table. Yoko, 19, center, one of the dancers in the Jaran Kepang group who was playing the Singa Barong, entered a trance. The pawang said a prayer while holding Yoko’s head to bring him back after the spirit that possessed his body fed on the sesaji offerings. “I started dancing Jaran Kepang when I was 14 and for the last 3 years I’ve been part of the village Jaran Kepang group. I often enter trances during performances, but I never remember what happens during the trance. When it’s over I feel like waking up from sleep,” Yoko explained.  “I don’t feel I get any benefit personally from entering a trance; it’s more a benefit for the community to have the ancestral spirits appeased and protecting us.” RNS photo by Alexandra Radu

The Jaran Kepang is an ancient ritual dance in which dancers ride painted horses made from woven bamboo. Its origins can be traced back to the Hindu communities in Bali and a ritual named Sang Hyang, during which the people were possessed by spirits. “Along with the spread of Hinduism to Java, the Sang Hyang evolved to become part of the Javanese traditions,” explained Santino Kuswarsantyo, who studies Jaran Kepang at an arts institute in Yogyakarta. 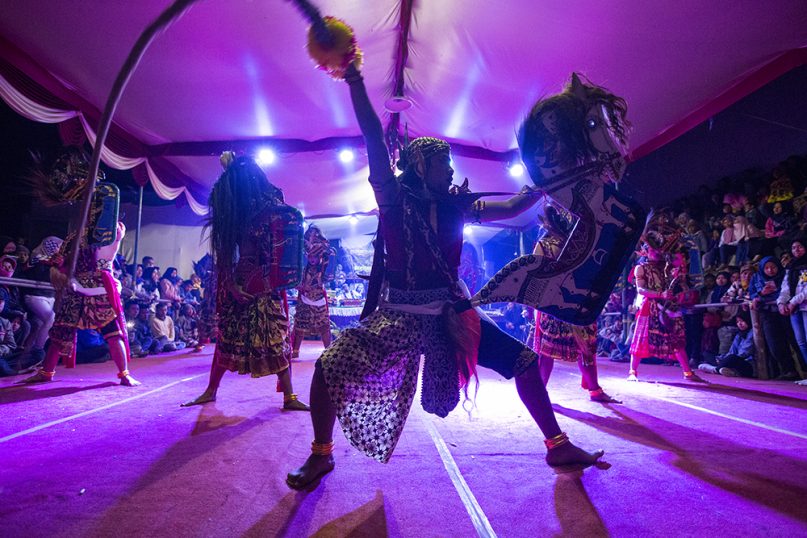 The stories depicted by Jaran Kepang speak of the heroism of the ancestors in defending their land, often in cavalry battles that ended in victory. Many of the stories portray the fight against invading Dutch armies, while others recall missionaries spreading Islam or leaders protecting areas from dangerous creatures. RNS photo by Alexandra Radu 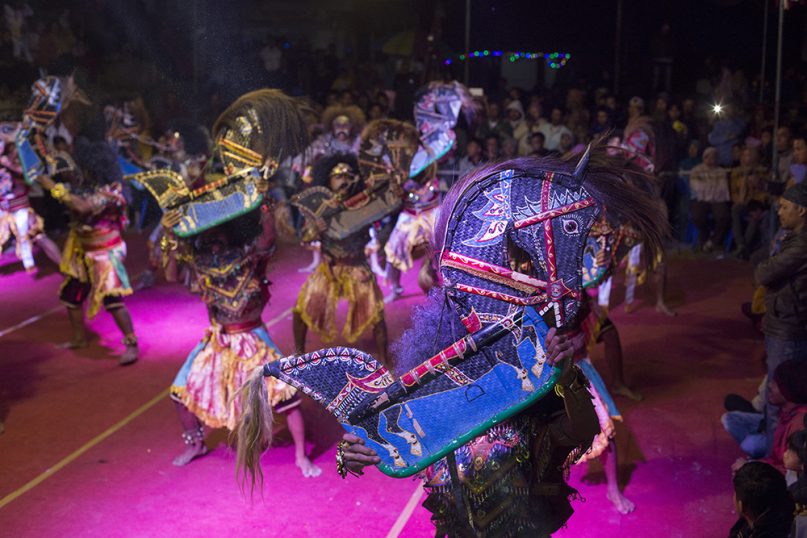 Children of Wonotirto dance in the opening performance of the evening. Children dance the Jaran Kepang, but they don’t enter trances, like some adults. Instead, children focus more on mastering the active and physically demanding dance moves. RNS photo by Alexandra Radu

Later, after the introduction of Islam to Java, the Jaran Kepang evolved to tell stories of the bravery of the Indonesian heroic figures, usually in spreading Islam or later in the fight against the Dutch invaders.

“Nowadays we have two approaches to Jaran Kepang: the spiritual approach and the rational performance approach. The spiritual version is still the original one, and the trance cannot be excluded. The performance version of the dance is shorter, only 25-30 minutes, and there is no trance involved. We usually see this version at festivals,” said Kuswarsantyo. Villagers perform the Jaran Kepang dance during the Haul celebration honoring the ancestors of the village in Central Java, Indonesia. RNS photo by Alexandra Radu 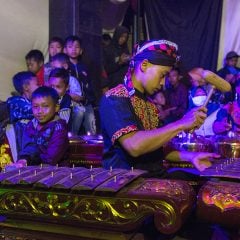 The Jaran Kepang dance performance is accompanied by traditional instruments, including gamelan, gong, angklung and other percussion instruments. RNS photo by Alexandra Radu 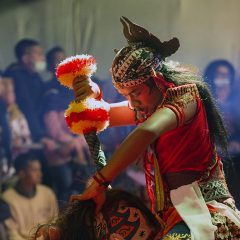 A villager dances during a Jaran Kepang performance in Wonotirto, Central Java, Indonesia. Of all the performances, only the local Wonotirto group’s performers entered trances. RNS photo by Alexandra Radu 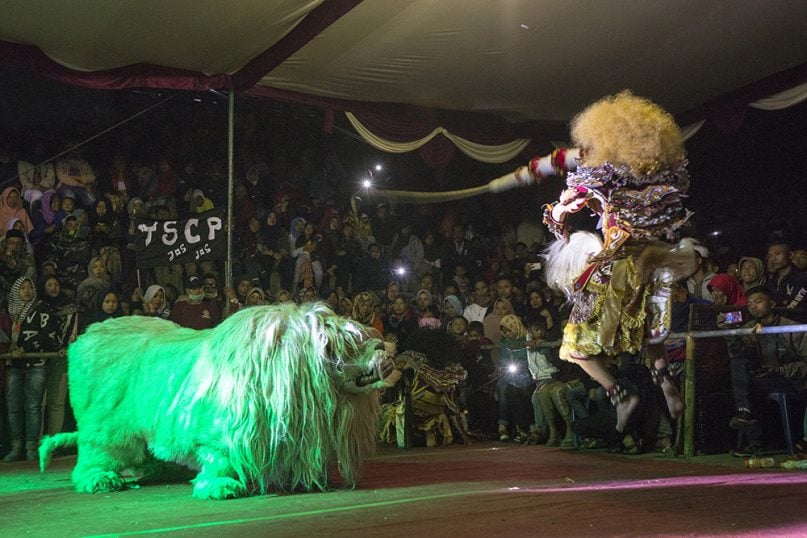 A villager depicts a local hero defeating a white lion – a mythical creature that threatened the region. RNS photo by Alexandra Radu

The dance is popular in Java and Bali and several regions of Malaysia, where it was brought by Javanese settlers. In Malaysia it is now forbidden by the Shariah law in its ritual form. Malaysians still perform the spiritual version in underground celebrations, but those are quickly disappearing. In Indonesia, it is still very much alive, performed during village celebrations, male circumcision ceremonies or when receiving important guests.