OSWEGO, N.Y. (RNS) — Suzanne Krauthamer Gurwitz remembers little about the 18 months she spent at the Fort Ontario Emergency Refugee Center in Oswego. She was 5 when she, her parents and two older brothers arrived at the former military post near Lake Ontario.

“Like other children, I played,” said Gurwitz, 80, of Plainview, N.Y. “I don’t remember being unhappy.”

Gurwitz was among 982 refugees at Fort Ontario, the only U.S. shelter for Europeans fleeing World War II. Of the 30 surviving refugees, 19 attended a 75th anniversary reunion on Monday (Aug, 5). The event commemorated the 1944 arrival of refugees in the small upstate New York city.

Several former refugees and Oswego residents didn’t want to talk about those worries or about the  Trump administration’s policies barring asylum-seekers. Instead, the former refugees, surrounded by descendants and greeting old friends, were eager to talk about how they came to live at the shelter.

Gurwitz, born in Paris to Polish Jews, remembers crossing the Alps and hiding in the woods before her family ended up living with nuns and priests in Rome in 1943. In June 1944, her father learned a ship would soon leave Naples, Italy, for a shelter in the United States. Deena Albert photographs her grandparents, Suzanne Krauthamer Gurwitz and Marvin Gurwitz, on Aug. 5, 2019, at the Safe Haven Holocaust Refugee Shelter Museum. The couple stands around a cutout of a photo of Suzanne’s brother, Simon, then 12, as a resident of the Fort Ontario Emergency Refugee Center in Oswego, N.Y. Suzanne, her parents and two brothers lived at the shelter for 18 months. Simon died in 2000. RNS photo by Renée K. Gadoua

By then, the Nazis had killed about 5 million European Jews.

The refugees came to the U.S. as Roosevelt’s “guests” and agreed to return to Europe after the war. President Harry S. Truman in December 1945 signed an executive order that allowed the refugees to enter the U.S. and the shelter closed in February 1946.

The refugees from 18 countries shared “loss, trauma and a path that somehow got them to southern Italy,” said Rebecca Erbelding, curator and historian at the U.S. Holocaust Memorial Museum in Washington and author of “Rescue Board: The Untold Story of America’s Efforts to Save the Jews of Europe.”

U.S. immigration policies kept most Jewish refugees out of America, she said.

“Isolationism, economic concerns, racism, and anti-Semitism all led most Americans to focus on domestic problems rather than international ones,” she wrote for the Holocaust museum.  “Reflecting the mood and situation of the country, State Department officers interpreted America’s restrictive immigration laws even more stringently, leaving the quotas far from ﬁlled.” 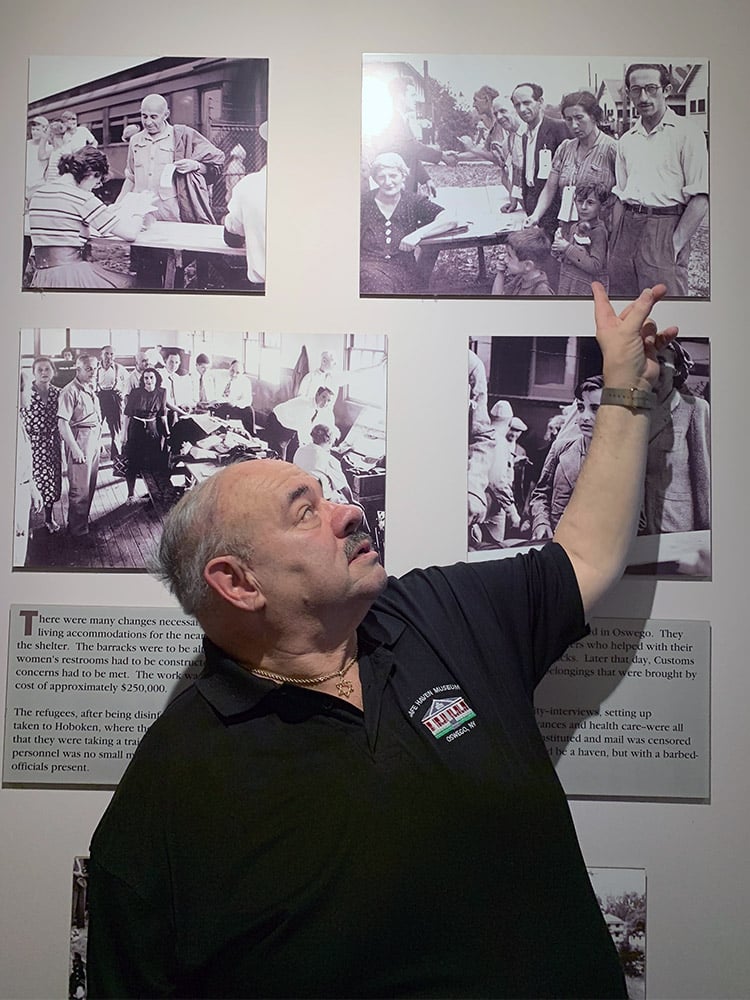 Harry Frajerman, of Philadelphia, points to a picture of his parents, Icek and Helen Frajerman, while attending a reunion at Safe Haven Holocaust Refugee Shelter Museum in Oswego, N.Y., on Aug. 5, 2019. Harry was born at Fort Ontario Emergency Refugee Center on Dec. 9, 1945. After World War II, the Jewish Federation of Philadelphia sponsored his family. Harry attended the reunion with his wife, Myrna Frajerman. RNS photo by Renée K. Gadoua

The refugees boarded the USS Henry Gibbins in Naples on July 21, 1944. About two weeks later, they arrived in New York Harbor, then traveled by train to Oswego.

They were greeted on arrival by military police and a chain-link fence topped with barbed wire, conditions many refugees found troubling. Despite restrictions — a 30-day quarantine, curfews, passes and less than luxurious conditions in the former army barracks — the former refugees described positive experiences and friendly interactions with city residents.

“It was an adventure for us,” said Simon Kalderon, a native of Bosnia-Herzegovina who was 9 when he arrived. “I never felt that I was different.”

Linda Cohen’s parents, Leon and Seri Kabiljo of Yugoslavia, dreamed of living in the United States. “This camp saved their life,” she said.

Rep. John Katko, R-N.Y., called the refugee shelter “a beacon of sanity in a world of insanity” and pledged to push for its recognition as a national park. In October 2018, President Trump signed the Fort Ontario Study Act, a step toward that designation.

Before Roosevelt created the shelter, refugees fleeing the Holocaust were sent back, said Katko.

“The State Department would send these ships back over to Europe and (refugees) would go back and meet their fate,” Katko told the crowd gathered for the anniversary. “They kept sending them back. Can you imagine that happening today?”

Suzanne Gurwitz’s grandson said that the anti-Semitism and nationalism that fueled the Holocaust parallels hatred for asylum-seekers at the U.S. southern border.

“This is what happened to our ancestors,” said Daniel Albert, a rabbinical student at Yeshiva University. “They closed the borders and didn’t let us in.”

Dani Dayan, consul general of Israel in New York and a supporter of designating Fort Ontario a national park, said anti-Semitism is “raising its ugly head again in Europe and Latin America and, unfortunately, in this country.”

“We know where this scourge of anti-Semitism can bring the human race,” Dayan said.

The memorial took place near the shelter’s former barracks and dining hall. A granite monument, dedicated in 1981, marks the site. Vandals have chipped the monument’s corners and marred the word “Jewish.”

Safe Haven officials have not repaired it, choosing to let the vandalism speak for itself.

News
Poland keeps ambassador at home amid dispute with Israel

News
Anger as French protesters compare vaccines to Nazi horrors
Follow us on Facebook!
Submit your photos to RNS