(RNS) — A political truism, backed by decades of data, holds that the presidential candidate most successful at persuading Catholic voters usually wins the White House.

Barack Obama won the Catholic vote twice. Donald Trump’s path to victory in 2016 ran through Michigan, Pennsylvania and Wisconsin, where Catholics make up a disproportionate share of the population. The president’s narrow margin of success in those states was fueled by white Catholics.

In 2020, these same Catholic swing voters could end up complicating his reelection. Along with that political calculus, the president’s actions have raised a theological and moral question: Can a faithful Catholic vote for Trump?

This may seem to be a strange question, given Trump’s commitment to appointing anti-abortion judges and his appeals to religious liberty in chipping away at LGBT rights. Both are strongly supported by the Catholic hierarchy. While polling shows a majority of Catholics oppose criminalizing abortion and a majority favor marriage equality, opposition to abortion and same-sex marriage are lynchpins of Catholic identity for bishops, conservative Catholic activists and millions of Catholic voters.

In fact, those issues have been so central to defining the Catholic political narrative that two months before the 2012 election, a bishop in Illinois warned his flock that voting for a Democrat could put “the eternal salvation of your own soul in serious jeopardy.” 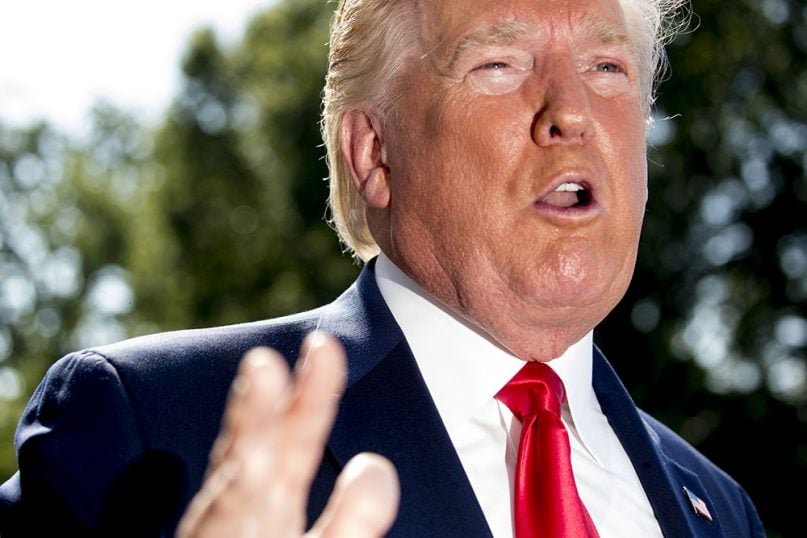 A less discussed but increasingly relevant topic for Catholic voters is church teaching on racism. “A Catholic cannot vote for a candidate who favors promoting an intrinsically evil act,” the U.S. Conference of Catholic Bishops states in “Faithful Citizenship,” a reflection guide for Catholic voters released every four years. Among those acts, the bishops specifically cite racist behavior, noting that Catholics “would be guilty of formal cooperation in grave evil” if their intent was to support such actions.

Racism is not treated as a peripheral issue by the bishops. “If a candidate’s position on a single issue promotes an intrinsically evil act, such as legal abortion, redefining marriage in a way that denies its essential meaning, or racist behavior,” the bishops write,” a voter may legitimately disqualify a candidate from receiving support.”

Almost half (48%) of U.S. Catholics now think Trump is a racist, according to a new Quinnipiac University poll, compared with 21% of evangelicals. On a recent Sunday at the Shrine of the Most Blessed Sacrament, a Catholic parish in Washington, a priest made national news for his homily that called on Trump to resign because he “spews hatred, bigotry and intolerance.”

The president has earned these opinions. A man who claims there were “very fine people on both sides” of a white supremacist rally in Charlottesville, Va.; who tells women of color in Congress to “go back” to the “crime-infested places from which they came”; and who recently described a predominantly black district of Baltimore as a “disgusting, rat-infested mess” where “no human being would want to live” has demonstrated a consistent pattern of willfully exploiting racism for political effect in ways that no conscientious Catholic should support. 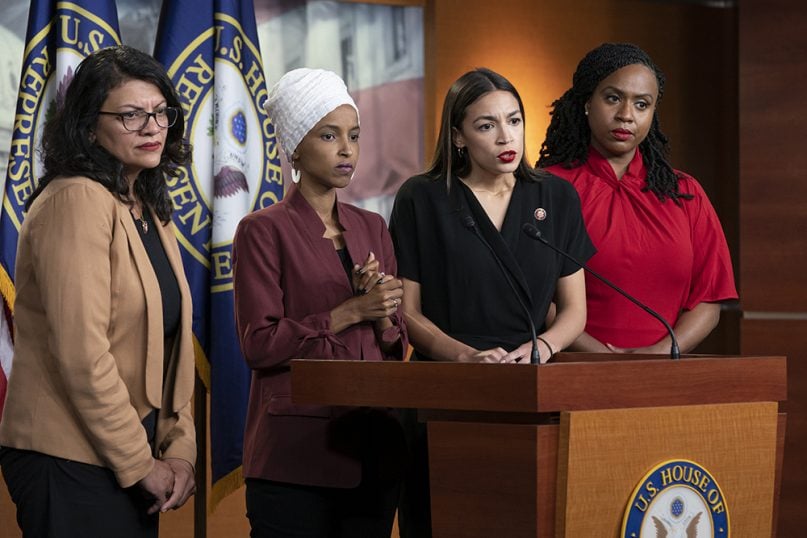 From left, Rep. Rashida Tlaib, D-Mich., Rep. Ilhan Omar, D-Minn., Rep. Alexandria Ocasio-Cortez, D-N.Y., and Rep. Ayanna Pressley, D-Mass., respond to remarks by President Donald Trump after his call for the four Democratic congresswomen to go back to their “broken” countries, during a news conference at the Capitol in Washington, July 15, 2019. All are American citizens and three of the four were born in the U.S. (AP Photo/J. Scott Applewhite)

The president has said the United States is being “invaded” by immigrants. “How do you stop these people?” Trump asked the crowd at a rally over the spring. “Shoot them!” someone screamed. The crowd laughed and Trump smiled.

Echoing the president’s language, the shooter who killed 22 people and injured 24 in El Paso over the weekend wrote that his deadly attack was “a response to the Hispanic invasion of Texas” and that he wanted immigrants to “return to their home countries.”

Along with white nationalist rhetoric that fuels violence, the Trump administration’s policies have a disproportionate impact on communities of color. Court documents recently filed by the American Civil Liberties Union show that more than 900 parents and children, including infants, have been separated by U.S. border authorities since a federal court ruling ordered the government to reunite more than 2,700 children with their parents more than a year ago.

Before the U.S. Supreme Court stopped Trump, his administration moved to systematically deprive communities of color resources and congressional representation by requiring a citizenship question on the U.S. Census, part of a broader voter suppression strategy the GOP has engineered across the country. This is in direct contradiction to the bishops’ national pastoral letter on racism, released last fall, that specifically cites “lack of access to the vote for some communities of color” as an example of “systemic racism.”

Faithful Catholics will have another reason to question their support for Trump after the recent decision by Attorney General William Barr to reinstate the federal death penalty. Barr, a Catholic, said in announcing the decision that “we owe it to the victims and their families to carry forward the sentence imposed by our justice system.” 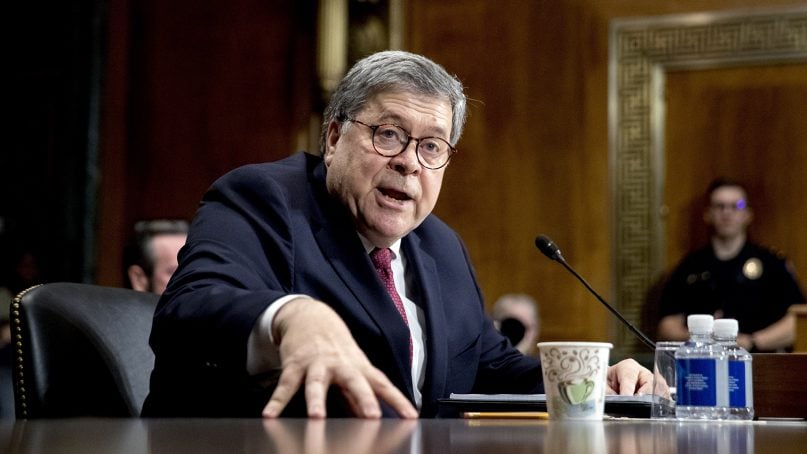 Attorney General William Barr testifies during a Senate Judiciary Committee hearing on Capitol Hill in Washington on May 1, 2019. The Justice Department says it will carry out executions of federal death row inmates for the first time since 2003. The announcement Thursday says five inmates will be executed starting in December. (AP Photo/Andrew Harnik)

But last summer, Pope Francis built on several decades of pro-life church teaching that challenged the death penalty and revised the Catechism of the Catholic Church to categorically declare capital punishment “inadmissible” in all cases because it is “an attack on the inviolability and dignity of the person.”

After Barr’s decision, Chicago Cardinal Blase Cupich called the Trump administration’s decision “gravely injurious to the common good, as it effaces the God-given dignity of all human beings, even those who have committed terrible crimes.”

If Catholic teaching definitively recognizes that opposing the death penalty is central to maintaining a consistent pro-life commitment, Catholic voters can’t ignore the administration’s decision when considering their vote.

The Trump administration’s pattern of racist policies and support for the death penalty are not separate issues. Many studies over the years suggest that the criminal justice system and death row cases are riddled with racial bias from the quality of legal representation defendants receive to sentencing disparities. Black defendants are far more likely to receive the death penalty if they kill a white person than the reverse, according to the Death Penalty Information Center.

Voting requires prudence and well-formed consciences. Neither political party has a monopoly on Catholic values. But faced with an administration that doubles down on racism at every turn and that has a politically expedient understanding of what it means to be pro-life, Catholics who check a box for Donald Trump will do so while ignoring core justice teachings at the heart of our faith. 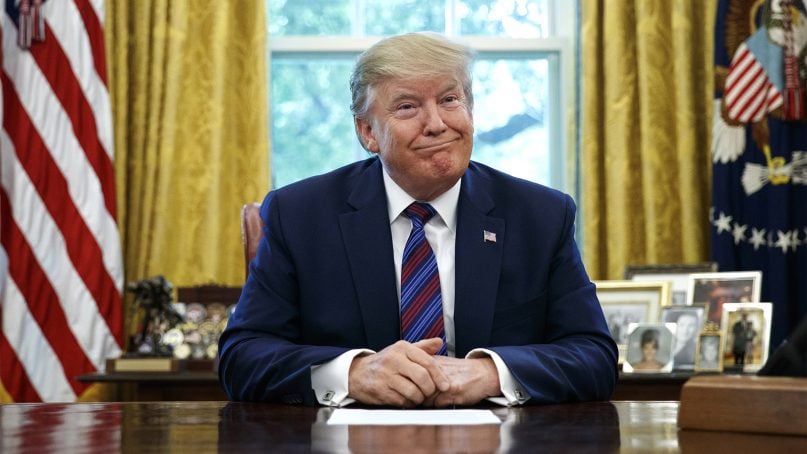 President Trump pauses as he speaks in the Oval Office of the White House in Washington on July 26, 2019. (AP Photo/Carolyn Kaster)

(John Gehring is Catholic program director at Faith in Public Life Action and author of “The Francis Effect: A Radical Pope’s Challenge to the American Catholic Church.” The views expressed in this commentary do not necessarily represent those of Religion News Service.)