ROCKVILLE, Md. (RNS) — From the time she arrived in 2013, the Rev. Jill McCrory had seen the congregation at Twinbrook Baptist Church, the progressive Baptist church she pastors, ebb and flow but never reach more than several dozen faithful in the pews that could hold far more.

So the multiracial, LGBT-affirming congregation in this Washington suburb made a tough decision: Its church will close.

But the more than $1 million from its sale will help 35 religious organizations and other nonprofits meet needs in the community. And the Hispanic congregation that long rented the building has bought it for less than its assessed value.

This weekend (Aug. 17-18), Twinbrook will hold a Saturday “legacy service” for the chosen grant recipients — from Baptist organizations such as the Association of Welcoming and Affirming Baptists to a program at a local elementary school that helps feed students who can’t afford a nutritious lunch. 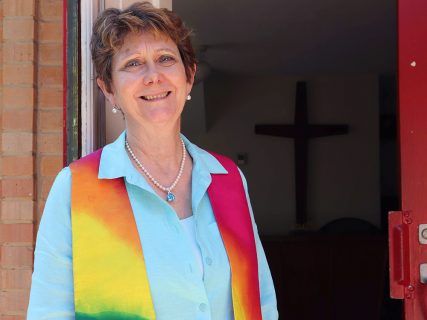 McCrory, 63, says her congregants and grant recipients will receive gifts of basil seeds as they leave special services and seek new places to worship and help those in need.

“What I’m saying, in the parting, is may this basil season your meals as we are seasoning the community around us,” she said of her upcoming last Sunday sermon at the church.

McCrory talked to Religion News Service about this time of transition for her congregation.

How old is your church and how did it come to be on this corner of Rockville, Maryland?

The church is 63 years old. It was founded in 1956 by a group of people who had moved into the neighborhood. It was a brand-new neighborhood, and they were members of First Baptist Church of Bethesda, and they did not want to go as far as Bethesda to church. They wanted to walk to church. And so they formed a small group, and First Baptist made them a mission of their church and sent them one of their ministers. That was Rev. John Laney, and he became their pastor.

When was it that you started to realize that a hard decision had to be made about whether your church should close?

About two, two and a half years ago. We had attempted to re-energize the church. We threw the doors open wide, proclaiming us as a welcoming and affirming church. And we drew some folks, but bottom line, this church, I believe, was created for a certain time and a certain group. And, it just couldn’t outgrow that.

So we looked at several options: They could close down and re-emerge as a completely new church with a new name. They could try some different models of outreach or they could put themselves on life support with a part-time pastor until they dwindled down ’til they just handed the keys to somebody.

Why did the church decide to go the route it chose?

Because that was the fourth option — to go out with dignity and grace. Rather than serve ourselves and spend down all the assets and all the budget and then just have this building that you had too few people to be able to deal with — we didn’t feel like that was the right path. With the history of this church being so open and so generous and John Laney’s vision of a “fellowship of the concerned,” we felt that the appropriate thing to do was to close and sell the building and then gift out those assets, while we still had the energy, the capacity to do that. 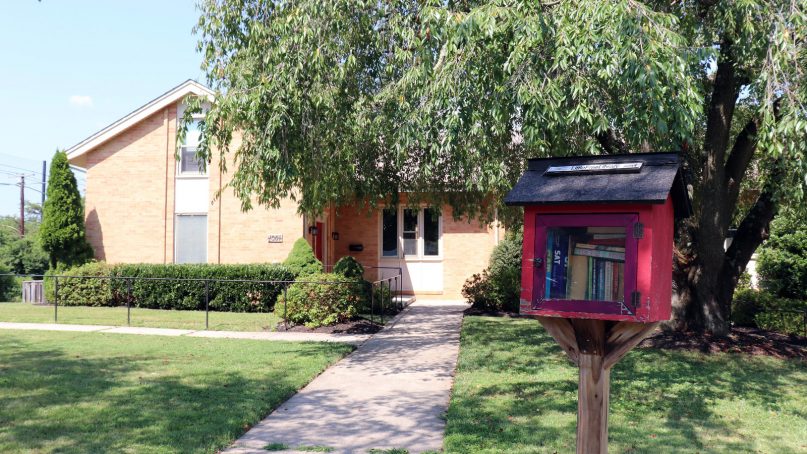 Can you talk a little bit about the people who are going to benefit from this move, the congregation Centro Cristiano Peniel?

They’re growing, and we wanted to make it possible for them to have the building. They were already looking for a building, because they don’t get enough time or space in this building. So the first decision we made was to sell the building to them at less than its value, so that they could afford it.

How did you identify the organizations that will benefit from the more than a million dollars in proceeds from the sale of the building?

We sent out a request for proposals to those organizations that we had been involved in. We had $4.5 million in asks because we didn’t set a limit. We just said, “What are your dreams?” And some people had million-dollar dreams and some people had $2,000 dreams, and we tried to fund what we could. Some folks are getting a fraction of what they asked for. The gifts ranged from $2,000 to $250,000 and the $250,000 is going to Community Reach of Montgomery County for a diabetes clinic.

What about on the other side: Who will be hurt most by this? 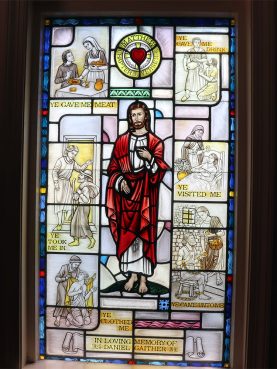 A stained glass window at Twinbrook Baptist Church in Rockville, Md. The window is dedicated to Daniel Gaither, whose family members were the first African-Americans to join the church. RNS photo by Adelle M. Banks

Our oldest members. The oldest member we have is a woman who the organizing meeting for this church in 1957 was held in her home. A couple of our charter members are still alive. And so these are people who are in their eighties and nineties. But it’s not just them. We just got an email from a woman. She was baptized in this church and was married in this church. She’s moved down to Charles County, and she’s sad because her church is closing. So it doesn’t matter whether you’ve been active and you were even still here. It’s your church.

Your church has supported a range of groups from the Gay Straight Alliance at the high school across the street to Alcoholics Anonymous to a Scouting group. Some of them met in this building. Are there some that you’ve had to tell they now have to meet elsewhere?

Nobody has to go. No one’s moving elsewhere. They’re all staying. Nothing’s changing except that we won’t be here.

You have long been an ally for LGBTQ people and stood outside the Supreme Court on the day same-sex marriage became legal nationwide. Do you think your church’s stance on being welcoming to gays and lesbians helped or hurt your church’s existence and survival?

Well, I’m sure there’s some people that would say both. We added some folks. We made people feel welcome. That itself, to me, is a victory, as is outreach. We lost some people over it. Some folks came and visited that perhaps their theology didn’t match ours. But we’re only talking about the last six years. The church did not — what’s the right word for it? — fail in six years’ time.

What is the biggest lesson you’ve learned from this experience of closing a church, which is obviously an issue that weighs on other clergy in similar situations?

Don’t underestimate the grief, be full of grace, and it’s hard.

What will your final sermon topic be?

The sermon for Sunday is about going out and continuing to be the fellowship of the concerned — but to the world.