(RNS) — The United Methodist Church has scrapped plans for its first General Conference meeting outside the United States.

The global denomination had been planning to hold the 2024 meeting of its decision-making body in Manila, capital of the Philippines.

But plans for a meeting there, first announced in 2015, are now off.

Sara Hotchkiss, business manager for the Commission on General Conference, said organizers could not find convention space available for two full weeks to host the gathering of United Methodists from around the world.

So the General Conference will be held elsewhere.

“No one has done anything wrong, or there’s no reason not to go. It’s just simply when we did a bid process, the facilities needed for the length of our conference were not available,” Hotchkiss said.

The business manager said the commission, which chooses the locations for and plans the denomination’s quadrennial meeting, had not received any bids from facilities it had contacted during the bid process to host the meeting.

Those bids were due in early July, she said.

Bishop Rodolfo Alfonso “Rudy” Juan of the Davao Area in the southern Philippines — the commission member who initially had invited the General Conference to the Philippines — told the United Methodist News Service the decision made him “sad.”

“I spoke passionately about my disappointment in this decision,” Juan said. “I did not support the cancellation, but I respect the decision.” Finances and the “current climate in the church” did not play a role in that decision, the Rev. Gary George, secretary of the commission, said in the UMNS report.

The United Methodist Church is the second-largest Protestant denomination in the U.S., and its membership is growing most quickly in the Philippines and many African countries.

The Commission on General Conference made the decision not to hold the 2024 meeting in the Philippines last week during its meeting in Lexington, Ky.

RELATED: Adam Hamilton on ‘Methodists in the middle’ and what’s next for the denomination

Also at that meeting, a task force reported to the commission it had found “credible objective evidence that four ineligible persons cast votes using the credentials of delegates who were not present” at a special session of the General Conference held this February in St. Louis to discuss the place of LGBTQ people in the church.

Delegates to the special session approved the so-called Traditional Plan, which strengthened the denomination’s rules barring LGBTQ United Methodists from ordination and marriage.

The four ineligible voters would not have impacted the outcome of the vote on the Traditional Plan, according to a press release from the United Methodist Church.

But they might have had an impact on a narrow vote on a measure allowing congregations to leave the denomination with their property.

The commission determined that vote is void and is asking the denomination Council of Bishops to refer it to its top court, the Judicial Council. 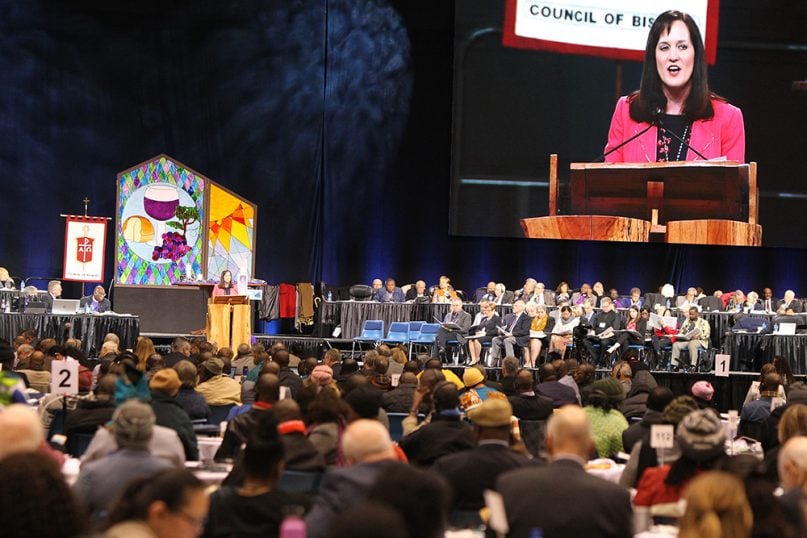 Jessica LaGrone, a member of the Commission on a Way Forward, presents the Traditional Plan during the special session of the United Methodist Church General Conference in St. Louis on Feb. 24, 2019. RNS photo by Kit Doyle

Donations to church ministries, including the General Conference, have “declined significantly” in the months since the special session, according to UMNS.

And both opponents and supporters of the Traditional Plan are still discussing how to proceed since the vote. Among their options are leaving the denomination, pushing for a new plan to change its structure to allow United Methodists with differing viewpoints to stay together or dissolving it entirely.

The next General Conference meeting will gather 862 delegates, both clergy and lay people, from May 5-15, 2020, in Minneapolis.

But, the business manager added, there is no concern that the meeting itself might be canceled. The commission quickly had found a location for the special session after the 2016 General Conference requested it, she noted.

“I sincerely hope someday to be able to do it.”