(RNS) — In July 2017, I was packed and ready to go with an interfaith delegation to Israel-Palestine after months of preparation. It had been 10 years since my last trip, but as a rabbi who has dedicated most of my life to advocating for Palestinian rights, I was planning to meet with Palestinian human rights defenders I had gotten to know through Skype, connect with Israeli peace groups, and learn about the challenges Palestinians face under Israeli rule.

None of that came to pass.

The Israeli government had placed me on a list of people who support Boycott, Divestment and Sanctions campaigns for Palestinian freedom and instructed the airline to refuse to allow me and four others to board our flight. When I arrived at the gate at Dulles International Airport outside Washington, D.C., I was turned away.

Yesterday, Israel announced that it would deny entry to U.S. Reps. Rashida Tlaib and Ilhan Omar, who were planning a first-of-its-kind congressional delegation to Palestine. The denial was met with a chorus of condemnation, from left to right. Many pointed to Trump, who had tweeted against their visit, as the reason Israel made such an anti-democratic decision.
hr />

RELATED: How some Jews are deluding themselves about Trump and the “squad”

It’s tempting to see these denials as yet another sign that Israeli democracy is worsening, that the Netanyahu administration is pulling the country ever more to the right. This would be a mistake. The truth is that before Trump, and before Netanyahu, Israel banned Palestinians from travel, putting a true stranglehold on their freedom of movement.

No matter what we might have been told, Israel is not a democracy. The fact is, Israel rules over both Palestinians and Jewish Israelis, but only Jews are given full rights.

Since 1967, Israel has imposed severe and debilitating restrictions on the movement of Palestinians inside the occupied West Bank, East Jerusalem and Gaza. Since 2006, Israel has imposed a suffocating and illegal siege and naval blockade of Gaza, amounting to collective punishment of the territory’s population of 1.8 million people, which is a war crime. 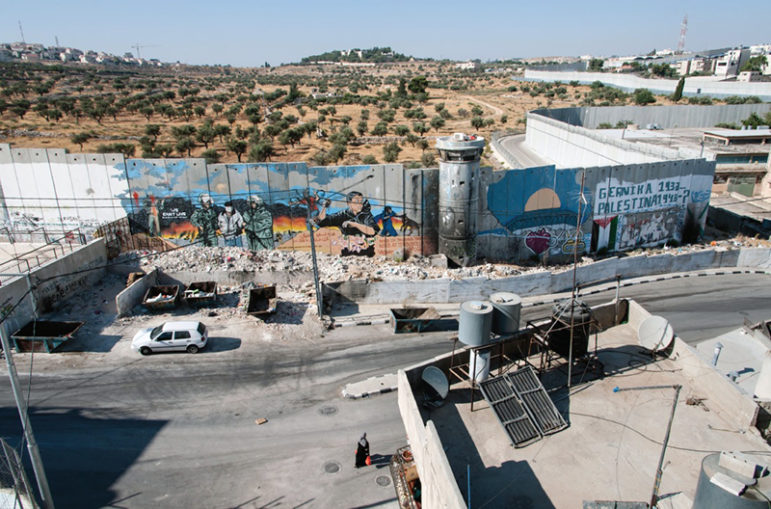 Beginning in 2002, Israel built a wall around and within the West Bank and East Jerusalem, a move that has been deemed illegal by the International Court of Justice. The wall prevents Palestinians from traveling freely. In many cases, the wall cuts Palestinians off from their farmland and separates them from schools, houses of worship, workplaces and family and friends. In this way, Israel controls Palestinians’ access to the world and to their families.

Palestinians are routinely forced to beg for permission to access their homeland and families — just as Rep. Tlaib was forced to do, before ultimately deciding that, “Visiting my grandmother under these oppressive conditions meant to humiliate me would break my grandmother’s heart. Silencing me with treatment to make me feel less-than is not what she wants for me — it would kill a piece of me that always stands up against racism and injustice.”

Those who insist that Israel is a democracy — “the only democracy in the Middle East” has been a foundational and ubiquitous mantra for its supporters — willfully ignore the rights of Palestinians. The myth of Israeli democracy is an essential part of the U.S.-Israel strategic relationship: No self-respecting American would allow themselves or their country to be associated with a nation that is authoritarian, discriminatory, or oppressive, right? But if we believe in democracy, we must believe in it for everyone.

I am heartened by the outcry against the Israeli government’s actions in these past 24 hours. When I was banned from entering Israel, more than 200 rabbis signed a letter condemning Israel. It was a monumental number of rabbis to do so.

But we cannot see these denials as somehow inconsistent or an aberration. In this Feb. 5, 2019, file photo, Rep. Ilhan Omar, D-Minn., left, and Rep. Rashida Tlaib, D-Mich., listen to President Trump’s State of the Union speech, at the Capitol in Washington. Israel’s prime minister is holding consultations with senior ministers and aides to reevaluate the decision to allow two Democratic congresswomen to enter the country next week. A government official said Aug. 15, 2019, that Benjamin Netanyahu was holding consultations about the upcoming visit of Omar and Tlaib and that “there is a possibility that Israel will not allow the visit in its current proposed format.” (AP Photo/J. Scott Applewhite, File)

House Speaker Nancy Pelosi said, “Israel’s denial of entry to Congresswomen Tlaib and Omar is a sign of weakness, and beneath the dignity of the great State of Israel.” If only that were so! The reality is that Israel has not “abandoned” democracy. Israel is not moving further toward undemocratic practices. It’s not a flawed democracy. It’s not a democracy if the people living under its rule are not equal.

When I was turned away at Dulles, I was profoundly disappointed and even hurt. But Israel’s decision to bar me isn’t about me. It’s about starving Palestinian resistance. Many American Jews are also hurting right now, but we all must realize that this decision is not about us, but about the rights of Palestinians.

When we realize this we can begin to take action. A good place to start is to get Congress to hold Israel accountable. We can urge our representatives, if they have not yet, to sign on to Minnesota Democrat Betty McCollum’s Human Rights for Palestinian Children Living Under Israeli Military Occupation Act, also known as H.R. 2407, a bill prohibiting U.S. taxpayer funding for the military detention of children by any country, including Israel.

Likewise, we can ensure our representatives support Rep. Omar’s resolution 496, which affirms the use of boycotts as constitutionally protected free speech and a time-tested tactic for effecting social change.

I believe one day Rep. Tlaib will be able to pick figs with her grandmother without having to forfeit her commitment to justice to do so. That day is hastened when we are able to see Israel for what it is.

(Rabbi Alissa Wise is deputy director at Jewish Voice for Peace. The views expressed in this commentary do not necessarily reflect those of Religion News Service.)