LINDAU, Germany (RNS) — On the same day that a prominent woman urged greater inclusion of female leaders in Religions for Peace, delegates to the 10th World Assembly of the interreligious global organization elected their first woman secretary-general.

On Wednesday (Aug. 21), they chose Azza Karam, an expert who works with the United Nations on issues of religion and development, as the organization’s new top official.

Karam, a Muslim and a professor of religion and development at Vrije Universiteit in Amsterdam, succeeds William Vendley, a Roman Catholic scholar from the United States who has held the role since 1994. 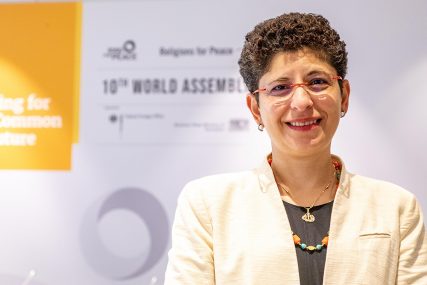 “A woman as head of RFP International — now that’s what I call ‘walking the talk,’” Tarunjit Singh Butalia, executive director of Religions for Peace USA, told Religion News Service. “She will serve as an example to young boys and girls of faith of gender equality.”

The announcement comes at a time when other women leaders have been seeking greater visibility in the leadership of the organization and beyond it.

As a procession of hundreds of leaders attending the assembly stepped off for a ceremonial walk through this Bavarian city, male officials of Religions for Peace held the most prominent spots at the front of the line.

But on Wednesday, midway to their destination, a new “Ring for Peace” sculpture symbolizing interreligious unity, women began to be included in some of those front-row locations. And as the organization’s officers posed for a photo, Mehrezia Labidi-Maiza, an honorary president, took a turn holding its red hockey-stick-shaped banner.

A couple of hours before, Labidi-Maiza, the first vice president of Tunisia’s Constitutional Assembly, spoke in a special session of the global assembly about the importance of women leaders in interreligious groups.

Speaking directly to Vendley, the outgoing RFP secretary-general seated in a plenary hall, she urged greater visibility for the female clergy, academicians and theologians in their midst from Africa, the Americas, Asia and Europe. 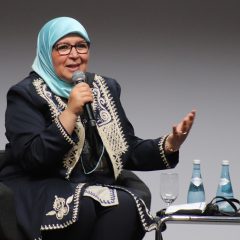 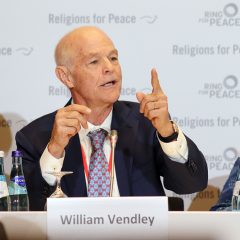 “Women in religions are not just followers or transmitters,” the Sunni Muslim woman said, drawing applause. “But they are also actors of their destiny. They are agents of peace. They are mediators. They can interpret and explain the texts of their religions.”

In an interview the day before, Vendley acknowledged the key role women have played as peace builders in the midst of conflicts around the world. He pointed to  Sierra Leone, where he said a group of unarmed female leaders was able to secure the release of dozens of children captured by rebels.

He said women’s work as “vital agents of peace” was the focus of the special session.

“We are not doing this out of political correctness,” he said. “We are doing it out of a sense of the dignity and the extraordinary gifts that religious women have.” 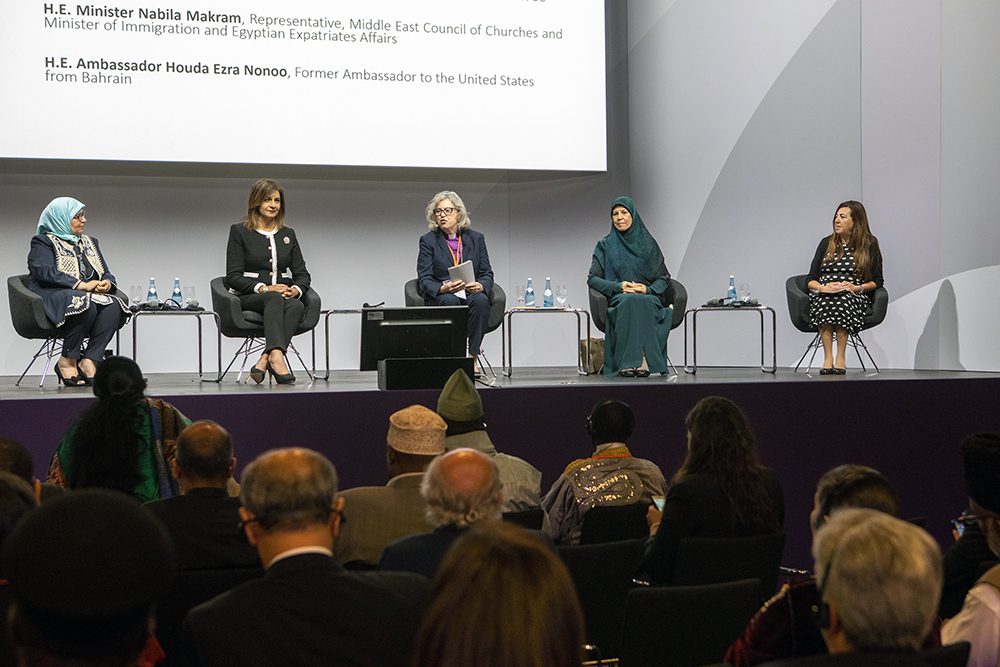 He said women should be recognized across the globe for their contributions to religious life.

“We all know that women have always been vital in the sustaining and maintaining and propagating of religious communities,” Vendley said. “Their visibility has not been commensurate with the scale of their contribution.”

The women’s panel discussion included Layla Alkhafaji, a Shiite Muslim who was imprisoned for 11 years for opposing Saddam Hussein’s rule and went on to become a member of the Iraqi Parliament, and Houda Ezra Nonoo, a Jewish woman and a former ambassador to the U.S. from Bahrain. 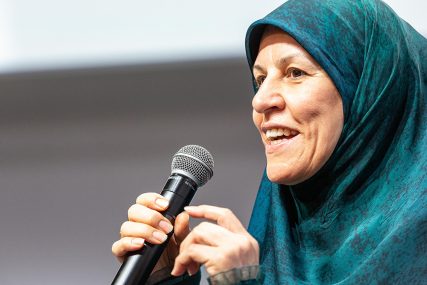 MENA Women as Peacemakers with Layla Alkhafaji. Photo by Christian Flemming/Religions for Peace

The three journeyed together earlier this year as peacemakers to Jordan to encourage women entrepreneurs and discuss how to promote equal opportunities for Jordanian women and Syrian refugees.

“It surprised me how the world is very small when we get together,” Alkhafaji said of the peacemaking trip. “We women, it seemed, shared the same difficulties no matter where we come from, what faith we have, what culture we are.”

Butalia, of Religions for Peace USA, said women’s voices have been interwoven into the World Assembly gatherings. But he also thinks religious organizations need to be intentional about including women in leadership roles. 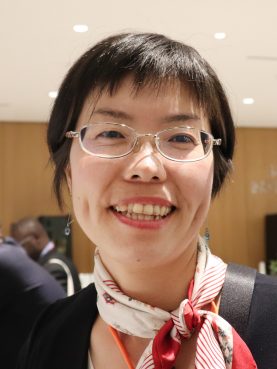 Yasuko Miyoshi, secretariat of Religions for Peace Japan, said events like the special session are important for drawing attention to women leaders.

“When I see the situation in Japan, still women in religious groups are not very much highlighted,” said Miyoshi, a member of the Buddhist lay organization Rissho Kosei-Kai who said the 25-member board of her RFP chapter has two women, including one who chairs its women’s committee. “Without those highlights women can be marginalized in the main assembly.”

In other interviews outside the plenary hall, Religions for Peace representatives said one of the five board members in Religions for Peace India is a woman. A deputy director of an interfaith organization that is the Malawi affiliate for Religions for Peace said her executive committee is working to increase the number of women and currently has two among its nine members.

“We have made it a point that we have a policy saying whenever they’re choosing their executive committee, they should also include women to be part of that,” said Sophia Nthenda, a Roman Catholic staffer of the Public Affairs Committee. 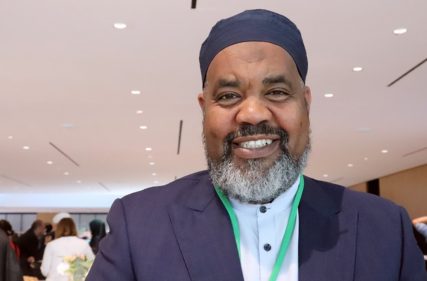 As Labidi-Maiza encouraged greater inclusion of women from the stage of the World Assembly, many in the audience applauded and some women cheered. But Imam Mohamed Magid, former president of the Islamic Society of North America, said he thinks men who heard her need to apply that message in the congregations they lead.

“I do believe men in that audience, they have to carry that message and push back in the community,” said Magid, noting that male leaders may be more inclined to build relations with people of other faiths than to work on problems within their own congregations, including sex abuse or child marriage.

Lynnaia Main, the Episcopal Church’s representative to the U.N. and a member of the voting delegation at the RPC World Assembly, said she was impressed with how the women of faith on the peacemaking panel countered the common notion about oppressed women in their region of the world.

“Clearly each of those women was empowered, deeply courageous activists and highly placed decision-makers and shattered the stereotypes that frequently American women can have about women in the Middle East,” said Main. The panel included Nabila Makram, a Coptic Orthodox woman and Egyptian immigration minister who serves as a representative of the Middle East Council of Churches. 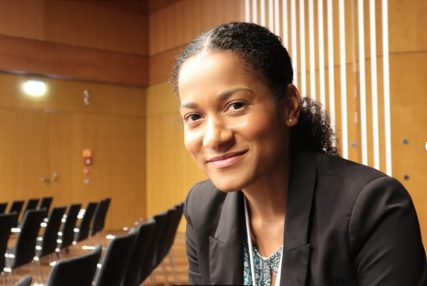 Rebecca Boakye, assistant to the director of Adventist Development and Relief Agency in Germany, said the discussion by the Middle Eastern and North African woman peacemakers encouraged her.

“I think that women are very important for the dialogue and to raise voice for women around the world and different countries, different religions and different situations,” she said. “I want to do more for myself.”