(RNS) – A Muslim-led crowdfunding campaign has raised nearly $150,000 to bail out parents detained in immigration jails.

The Muslims for Migrants campaign, launched Aug. 5 by the Islamic nonprofit CelebrateMercy, is donating all funds to the National Bail Fund Network to pay bond fees for immigrant parents who have been detained while they await a decision on their immigration status or potential deportation.

The initiative has so far released nine detained parents — seven fathers and two mothers — and reunited them with their families. A tenth parent will be released by Thursday (Aug. 29).

“The forced separation of families is very antithetical to everything our faith teaches,” said Tarek El-Messidi, director of CelebrateMercy. “It’s the harshest thing you can do, especially when these families are coming from such difficult circumstances.”

One released parent, a West African immigrant, had been detained in a Philadelphia-area Immigration and Customs Enforcement jail for four years because he could not afford to pay his $30,000 bond. CelebrateMercy’s campaign reunited him with his 78-year-old father, as well as his three-year-old daughter, whom he had only ever seen in photos.

“Assalamo alaikum (peace be upon you), brothers and sisters,” said the released man, whose real name was not given for safety reasons, in a video posted by CelebrateMercy. “I really appreciate for the help. May Allah bless all of us and keep blessing all who can help each other and others who are in need.” 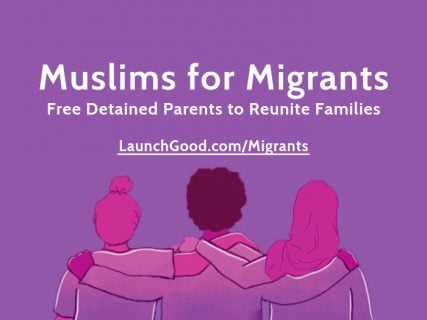 Other released parents include a Central American man fleeing gang violence who returned home in time for the birth of his second child; a West African who reunited with his wife and children after five months in time for his wedding anniversary; a mother of two who had been detained for eight months after fleeing domestic violence in Honduras; a single father who had not seen his 8-year-old son in 10 months; and a mother of three teen daughters, all of them U.S. citizens.

“The core of this campaign is based on a saying of the Prophet Muhammad: ‘Show mercy to those on earth, and God will show mercy to you,’” El-Messidi said. “What’s going on in America right now goes against the poem enshrined on the Statue of Liberty, and it’s also antithetical to everything taught by the Prophet Muhammad and the Islamic faith.”

More than 30 prominent Muslim community leaders across the U.S. are supporting the campaign as partners, including campaign advisers Imam Zaid Shakir and Imam Omar Suleiman.

“As the humanitarian crisis at the southern border deepens, there is a deafening silence from most corners of the American Muslim community,” the two imams wrote in an open letter earlier this month. “Shouldn’t the nation of the Prophet (peace and blessings of Allah upon him) who was himself an orphan and a migrant … be the first to be moved with the images of children in cages?”

The initiative has also received social media attention from the Hispanic Caucus and Muslim congresswomen Reps. Ilhan Omar and Rashida Tlaib. El-Messidi said one church has also reached out to create a similar fundraising campaign.

Ahead of the Trend
Study: Black Catholics in US are a tiny minority increasingly drawing on immigrants
Follow us on Facebook!
Submit your photos to RNS