VATICAN CITY (RNS) — Pope Francis drove home his message for lasting peace in the troubled country of Mozambique on Thursday (Sept. 5), the first day of his three-country visit to Africa, while speaking to its leaders of today and its generation of tomorrow.

“In the course of these years, you have come to realize how the pursuit of lasting peace, a mission incumbent upon all, calls for strenuous, constant and unremitting effort,” Francis told local leaders and authorities in the capital of Maputo, comparing peace to a “delicate flower.”

“As a result, we need to continue, with determination but without fanaticism, with courage but without exaltation, with tenacity but in an intelligent way, to promote peace and reconciliation, not the violence that brings only destruction,” he added. 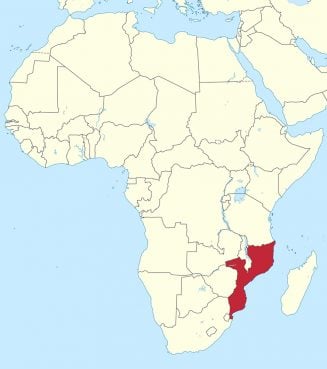 The tenuous nature of peace is a lesson well known to Mozambicans, whose President Filipe Jacinto Nyusi recently signed a third treaty with the armed guerrilla forces, Renamo, led by Ossufo Momade, over two decades after a costly civil war officially ended. Elections in the country are expected to take place Oct. 15.

Francis endorsed the Aug. 6 peace treaty in the country, calling it a “landmark” and praising the Mozambican people for refusing “to let human relationships be governed by vengeance or repression, or to allow hatred and violence to have the final word.”

The Catholic Church has played a vital role in promoting reconciliation in the country, bringing the opposing factions to Rome to sign the initial peace treaty in 1992, which was mediated by the Catholic Community of St. Egidio.

During Thursday’s meeting with the pope, Nyusi and Momade were present. Nyusi referred to Momade as “my brother” during his opening speech, leading observers to point to the papal visit as a “positive boost.”

“It’s definitely a good day for peace and reconciliation,” said Myrta Kaulard, the United Nations resident coordinator in Mozambique, speaking to reporters traveling with the pope.

Francis also voiced his “closeness and solidarity” to those affected by the cyclones Idai and Kenneth, which killed almost 1,000 people and left many more displaced earlier this year. The pope said he was sad to not be able to visit the devastated areas personally but assured of his own closeness and that of the Catholic community.

Climate change and its effects will be a recurring theme of Francis’ six-day trip to Mozambique, Madagascar and Mauritius, which have felt the heavy consequences of both natural and man-made disasters.

“The protection of the land is also the protection of life,” he stressed, “which demands particular attention whenever we see a tendency towards pillaging and exfoliation driven by a greed generally not cultivated even by the inhabitants of these lands, nor motivated by the common good of your people.” 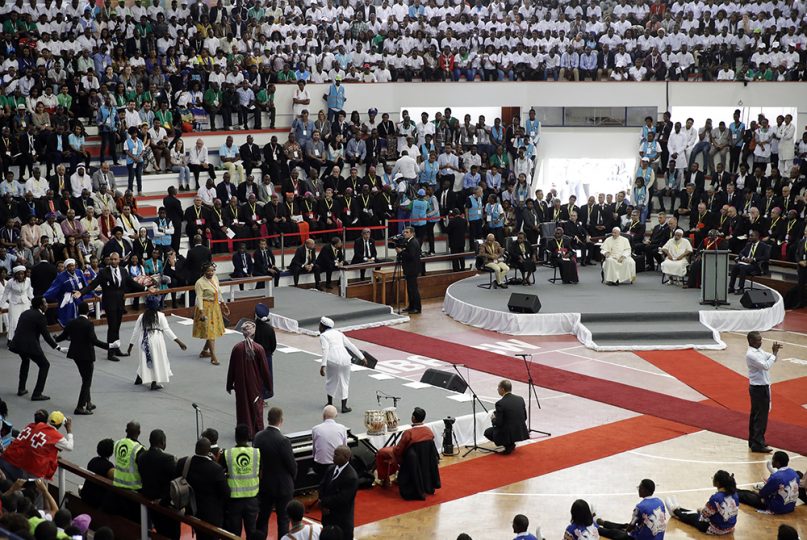 Pope Francis, sitting second from right at the stage at right, attends an inter-religious meeting with youths at the Pavillon Maxaquene stadium, in Maputo, Mozambique, Thursday, Sept. 5, 2019. Francis praised Mozambique’s president and opposition leader Thursday for their courage in signing a landmark new peace accord, as he opened a visit to the southern African nation by calling for a future where reconciliation, hope and sustainable development become “weapons of peace.” (AP Photo/Alessandra Tarantino)

Having pushed his agenda for peace before the current leaders of Mozambique in the Ponta Vermelha Palace, Francis left aboard the popemobile to lead an interreligious meeting with local youth at the Maxaquene Pavillon.

More than 40% of Mozambique’s population is under the age of 14, and more than 65% is under 25, according to official demographics.

Francis was greeted by a cheering and dancing young crowd, with an enthusiasm that has seldom followed the pope in his European trips, chanting “Reconciliation!” as he arrived. The pomp of ceremonial functions was left behind as the meeting took on a stadiumlike feel, with the pontiff often asking the crowd to repeat his words after him.

The pope warned of a world that “is destroying itself through war,” and he encouraged the young citizens of Mozambique to “find ways of building social friendship.”

The large crowd was composed of young people of Christian, Muslim, Hindu and other religious identity who sang, danced and acted out their ancient culture and their recent challenges. The pope encouraged them never to give up before adversity and to be wary of those who wish to create division.

“If, as a result of our own simple and at times costly efforts, we can find points of agreement amid conflict, build bridges and make peace for the benefit of all, then we will experience the miracle of the culture of encounter,” Francis said.

Signs of the Times
Six things you need to know about Pope Francis and gay civil unions
Faith
Pope Francis’ support for civil unions is a call to justice — and nothing new
News
Divided reactions in US as pope backs same-sex civil unions
News
Vatican and China extend ‘experimental’ agreement on appointment of bishops
Opinion
The pandemic isn’t over, and misinformation can still be deadly
© Copyright 2020, Religion News Service. All rights reserved. Use of and/or registration on any portion of this site constitutes acceptance of our User Agreement and Privacy Policy, Privacy Statement and Cookie Notice. The material on this site may not be reproduced, distributed, transmitted, cached or otherwise used, except with the prior written permission of Religion News Service.