VATICAN CITY (RNS) – On his flight back from a weeklong trip to Africa, Pope Francis answered the small yet vocal crowd of critics of his papacy, saying that while he hopes for dialogue he’s not afraid of a schism.

“There has always been a schismatic option in the church, always,” Francis said while answering a question from English speaking reporters on Tuesday (Sept. 10).

“I am not afraid of schisms. I pray that they won’t happen, because the spiritual health of a lot of people is at stake,” he added.

Last week, the pope made headlines when he told French journalist Nicolas Seneze, “It is an honor when Americans attack me.” The journalist had presented the pope with a copy of his new book, “How America Wanted to Change the Pope,” which details conservative American Catholics’ opposition to the election of the Argentine pontiff.

Newly appointed Vatican spokesman Matteo Bruni tried to clarify the pope’s response, saying Francis meant that “he always considers criticism an honor, particularly when it comes from authoritative thinkers, and in this case from an important country,” but to little avail.

The tensions between Pope Francis’ pontificate and several outspoken and well-financed conservative factions of the Catholic Church are no secret. Since his election, some critics have accused Francis of heresy and called for his resignation. Papal allies have even spoken of a plot against him. 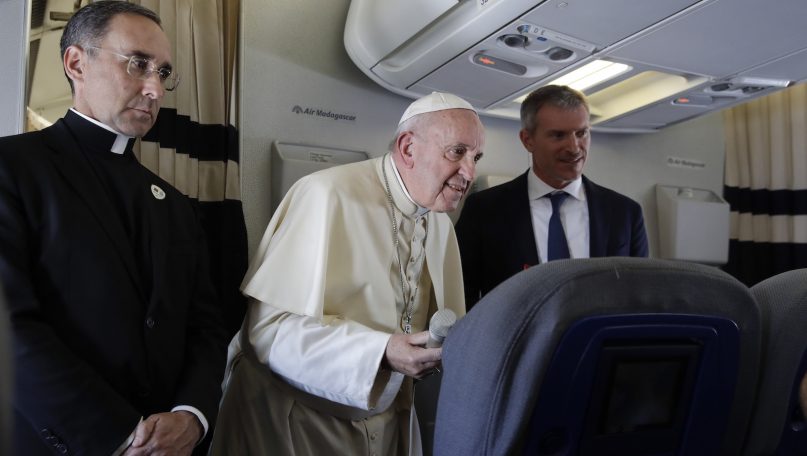 Pope Francis is flanked by his spokesperson Matteo Bruni, right, and Pope’s trip organizer father Mauricio Rueda, left, as he addresses journalists during his flight from Antamanarivo to Rome, on Sept. 10, 2019, after his seven-day pastoral trip to Mozambique, Madagascar, and Mauritius. (AP Photo/Alessandra Tarantino)

From his famously diffident 2013 answer to a question about gay Catholics (“Who am I to judge?”) to the cautious opening toward Communion for divorced and remarried couples put forth in the apostolic exhortation “Amoris Letitiae,” Francis’ pronouncements have struck fear in some conservative minded faithful that this pope might just go too far.

With a gathering of bishops headed to Rome next month to discuss the Amazon region, where the topic of allowing married priests to minister in the region is likely to emerge, traditionalists have been particularly outspoken about their concerns recently, galvanized around one especially vocal critic, Cardinal Raymond Burke.

While Francis told reporters on the papal plane Tuesday that “criticism is always helpful,” he also said that certain types of criticism — “arsenic criticism,” as he called it — can “sometimes make you angry.”

“I don’t like it when the criticism comes from under the table,” he said. “They smile at you and show their teeth and then they stab you in the back. This is not fair. It’s not humane.”

The pope clarified that his critics don’t hail just from the United States, “but from everywhere,” including the offices and departments at the Vatican that comprise the Roman Curia. He praised those who, while opposing his views, have the courage to voice them and engage in dialogue.

But he emphasized that schisms are a recurring theme in Catholicism, citing the strong divisions that took place between different factions of the church during the First and Second Vatican Councils. He added that schismatics often detach themselves from the faith of the people of God.

“A schism is always an elitist detachment caused by an ideology that is separate from doctrine,” said the pope.

Francis said that while he’s been dubbed a “communist” by some of his critics, he has echoed the same sentiments of his predecessor, St. Pope John Paul II, who was beloved by the majority of conservative Catholics in the United States.

Francis also disapproved of the “rigidity” that exists within the church, which he called “pseudo-schismatic,” and includes many Christians, bishops and priests.

“We must be meek with people who are tempted by these attacks, they are going through tensions, we must accompany them with meekness,” he said.