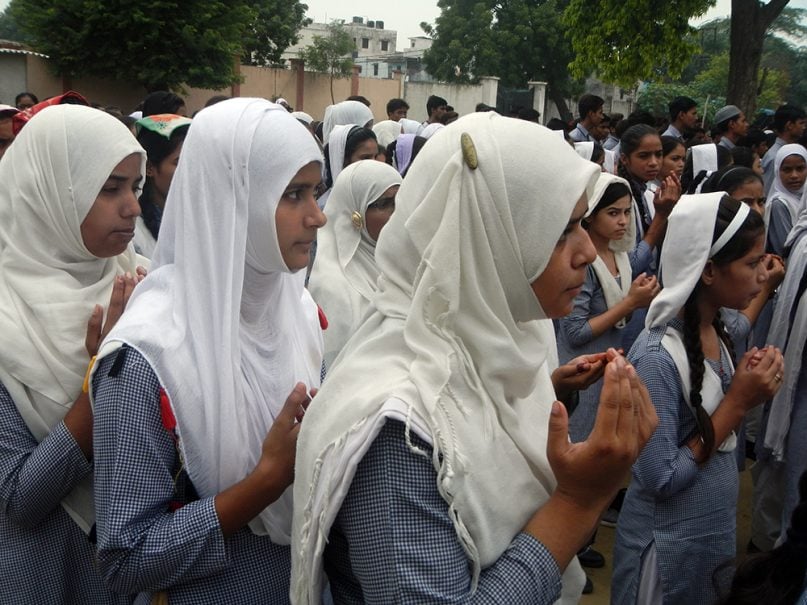 ALIGARH, India (RNS) — Every morning at the Chacha Nehru School, 10-year-old Mahanand recites verses from the Quran to a roomful of his fellow students.

He then walks over to a consecrated space for Hindus in the same room, and amid the lighting of ritual lamps for Hindu deities, chants Vedic mantras.

Raised an orthodox Hindu in this city southeast of New Delhi, Mahanand believes both Hindu mantras and Islamic rituals are conduits to the same god.

“In this school we are taught that Hindus and Muslims can study, pray and eat together without fear or discrimination,” said Mahanand. “This is where we break all barriers on grounds of faith.”

Named after India’s first prime minister, Jawaharlal Nehru (affectionately known by many Indians as uncle, or “chacha”), the Chacha Nehru School was founded 19 years ago with the idea of educating underprivileged children of India’s two predominant faiths in the fundamentals of both Islam and Hinduism.

The approach has always been an anomaly in this city whose large Muslim minority prefers to send its young people to Islamic madrassas. But as India’s religious divide becomes increasingly political with the rise of the Hindu nationalist Bharatiya Janata Party, Chacha Nehru has become a sore spot for Muslims and Hindus alike.

In July, the school’s founder, Salma Ansari, 75, wife of India’s recently retired vice president, Hamid Ansari, went a step further, building a separate prayer room where the students can not only learn each other’s faiths but pray in common.

The step has piqued orthodox Muslim clerics and Hindu nationalists. Haji Zameerullah Khan, a local Muslim politician, said the prayer room threatened communal peace and brotherhood. “It’s not possible for Hindu and Muslims to pray together in one place,” said Khan. “This will have the same repercussions as in Ayodhya when the Babri Masjid was destroyed,” referring to the 1992 riots that followed a Hindu nationalist political rally where the crowd tore down a historic mosque.

The Bharatiya Janata Party’s local general secretary, Manav Mahajan, said Ansari was intent on boosting the popularity of Muslim schools by portraying them as inclusive. Rashid Ali, the school’s principal, said the school has long been the target of attacks, with frequent inquiries made about whether it was a terrorist camp. Children’s books have also been allegedly scrutinized to understand its educational curricula. In 2017, rat poison was found in the school’s water cooler.

He acknowledged that the prayer room was bound to provide further controversy, saying, “This is a bold step at a time when the political climate in Aligarh is highly polarized.” But the controversy has a point, he said:  “We want our children to aspire for a more equal world.”

Ansari, an observant Muslim, got the idea for the school in 2000, while visiting villages around Aligarh. She was struck by the poverty and deprivation there.

Having gone on hajj, or the pilgrimage to Mecca, 10 times, fasted twice a week and read the Quran diligently, she still felt a spiritual vacuum in her life. “Seeing all the poverty, I got a spiritual calling to go deeper,” she told Religion News Service. “I wanted to work in the slums and provide free education to boys and girls across different religious traditions.”

When she started the school in an old fort with just 20 students and a tree for shade, “I was dismissed as a heretic,” said Ansari. “People were saying every madrassa will now move away from their strictly Islamic education founded on Tawhid,” using the Arabic word for monotheism.

But what began as an educational experiment has snowballed into a sprawling campus dotted with guava trees, where 70 teachers provide a haven to the students in a politically volatile city.

Religious polarization has been a growing problem in Aligarh in the past five years as it has across India since the election of the Hindu nationalist leader Narendra Modi as prime minister. In Aligarh, the divisions have centered on Aligarh Muslim University, India’s first Muslim university, founded in 1920, and the city’s crown jewel. 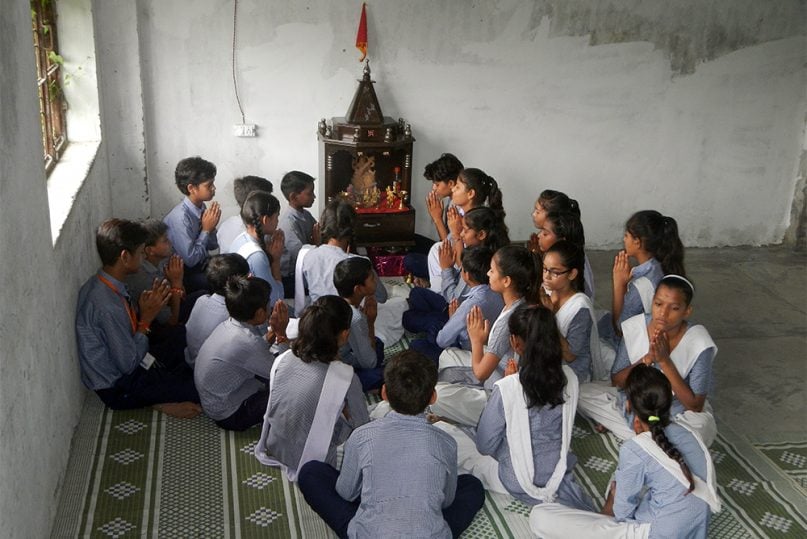 Last year, a BJP member of Parliament triggered a public debate by demanding that a 1940s portrait of Mohammad Ali Jinnah, the founder of Pakistan, that hung on campus should be taken down and sent to Pakistan.

More recently, the same minister issued a statement suggesting that the word “Muslim” should be dropped from the university’s name, as it “made a large section of the society uncomfortable.”

Mohammad Sajjad, a history professor at the university, said Hindu nationalists are looking to stoke hate as a way to gain electoral advantage.

“They are peddling falsehoods against Indian Muslims and saying that Hindu pride has been hurt,” said Sajjad. “This is the basis of majoritarian, jingoistic politics.”

Local government officials have increased the tensions with measures that Aligarh’s Muslims view as harassment. In July, the city’s government banned religious activities in public spaces, including the five-times-daily Muslim obligatory prayers, which often spilled onto the city’s roads.

Aligarh’s district magistrate, Chandra Bhushan Singh, justified the move by saying it would improve the “law and order situation in the city.”

Mahajan, the BJP’s general secretary of Aligarh, pointed out, “The public needs to cooperate with the government in curbing hooliganism, just as they do in Israel.”

In the face of government pressure, the leading Islamic jurisconsult of Aligarh, Mohammad Khalid Hameed, instructed all Muslims to pray in their homes and terraces.

Mahajan said the Chacha Nehru School’s prayer room is an attempt to distract from radicalized Muslim activity in the state of Uttar Pradesh. In July, the police raided a local Muslim school in Uttar Pradesh’s Bijnor district and recovered ammunition, after which the suspects were taken into custody.

“Ansari’s experiment is a complete hypocrisy to make people forget Bijnor and similar incidents that pose a real threat to the country,” said Mahajan.

Ansari has garnered some support from civil society groups and local leaders, but she has gotten criticism even from those who believe that education should not be segregated by faith

“There should be no temple or mosque at the school,” said Ajay Bisaria, a professor of Hindi at Aligarh Muslim University, who said schools should not cater to any religious identities. “Their education should be based on inclusion of diverse, even marginalized identities across India.”

Ansari relies for strength, she said, on her belief that a higher power has set her on this path. She looks to the Quran for metaphysical guidance and to the Hindu sacred text the Bhagavad Gita for practical wisdom.

But her vision, she said, is for a secular education that will preserve the India where Hindus welcome Muslims and vice versa. “Inclusion of all doesn’t go against the tenets of Islam,” said Ansari. “It’s important to preserve the secular ethos of India to prevent communal flare-ups.”