(RNS) — Mark Charles is not your typical presidential candidate. The son of an American-Dutch mother and a Navajo father, he is an author, advocate and former pastor, and he has a lot to say about America’s future — and its past. Charles sat down with Religion News Service to discuss his presidential campaign, as well as his religious roots. This interview has been edited for length and clarity.

So why run as an independent candidate?

I’ve come to the conclusion that the United States of America needs a national dialogue on race, gender and class.

But I didn’t know how to make the nation talk about it. … I concluded the best way to get there is to use the presidential election cycle because every four years we have a dialogue about who we are and where we’re going.

I watched with fascination as Bernie Sanders got the nation talking about (systemic economic inequality). … He changed the dialogue by running for president.

But he ended that section of his speech by telling the audience … (that) these things and other blemishes of our history do not detract from our nation’s great(ness). I heard him say that and my heart just fell.

So, I concluded I don’t think I’m going to find the candidate. And so it was after that I began pondering what would it take to become that candidate.

You used to be a pastor, and you’ve talked about your faith. Did your faith play a role in your decision to run for president?

I’m a member of a community that has endured genocide, and the horrors of boarding schools, and incredible oppression because some people thought their job was to legislate their theologies and make their nation Christian. And they tried to drive it down the throats of others. Read the teaching of Jesus — that was never his goal. I’m a Christian, yes. I am not trying to make my nation Christian. I’m not trying to legislate my theology. I deeply believe in the separation of church and state. I’m deeply convinced both the church and the nation will be healthier when the two get out of bed with each other. 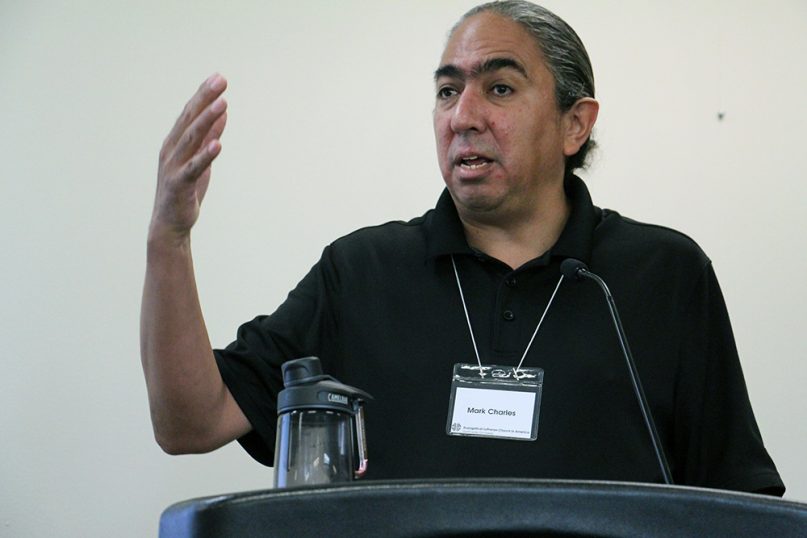 Mark Charles — a Navajo pastor, speaker and author — discusses the Doctrine of Discovery to a room full of missionaries in the Evangelical Lutheran Church in America, gathered July 26, 2018, in Woodstock, Ill. RNS photo by Emily McFarlan Miller

You mentioned the Doctrine of Discovery while speaking at the Native American candidates forum, and have a forthcoming book on the subject. Can you speak a little more about that?

I was pastoring the church called the Denver Christian Indian Center, a majority Native congregation. In my first council meeting my council said to me, “Our last pastor introduced us to the concepts of contextualizing worship for indigenous cultures and we want you to lead us in that.” I had never heard of the term before. Essentially the way the gospel was presented by the colonial church to indigenous peoples was that to become a Christian you have to give up your pagan language, your pagan culture, your pagan ways and become Western. So the question we began asking as a church is: What does it mean to be Native, to be Navajo and be Christian?

What does it mean to follow Jesus? Not as an assimilated American, but as a Navajo person? That process for me was very eye-opening. It’s what  challenged me to begin to critique the teachings of the church and the things I had always assumed for so long. The question you have to ask is: We have this Doctrine of Discovery that says “invade, search out, capture, vanquish and subdue all Saracens and pagans whatsoever.” How do you get to that from the teachings of Jesus?

What do you make of Christian groups that have rebuked the Doctrine of Discovery, like those that burned copies of it when visiting Standing Rock in 2016?

I was at Standing Rock about a week or two after this event happened and I was talking to one of the people who organized it.

And I said, ‘Well this sounds interesting. I’m curious … did anyone give any land back? The Doctrine of Discovery is the basis for land titles. If you’re going to repudiate the doctrine, you should give some land back.’

I said “Well, did you commit that if you got sued in court, you wouldn’t defend yourself because you just repudiated this doctrine that is the legal precedent for land titles?”

So you want more from progressive religious groups than just repudiations?

Absolutely. This is what my book addresses. It’s fairly easy to call out the (political) right. Again, that’s explicit. The left is implicit. So when you have this sort of dehumanization happening at the systemic level within the United States — the white supremacy, the racism and sexism — these become bipartisan values. The difference is between explicit versus implicit: “Make America Great Again,” or “America is already great.” They both agree the past, the history, was great. It wasn’t. It sucked.

Finally, what is the core message of your campaign?

Georges Erasmus, a Dene leader writing about the Truth and Reconciliation Commission in Canada, said if you want to build community you have to start by creating common memory. I love that quote. It gets to the heart of our nation’s problem, which is we don’t have a common memory. We have the white majority that remembers the mythological history of discovery, expansion, opportunities and exceptionalism.
Then you have communities of color, women, LGBTQ, that have the lived history of stolen lands, broken treaties, slavery, Jim Crow laws, segregation, sexism, exclusion, boarding schools, internment camps, families separated at our borders. There’s no common memory. And, because of that, community is almost nonexistent at a national level right now. We can’t even talk to each other. The theme of my campaign is, I want to build a nation … where for the very first time ‘We the people’ truly means all the people.
Share
Tweet
Share
Posted in
News