NEW YORK — The Higher Committee of Human Fraternity has come together for a global gathering at the New York Public Library in which they shared with stakeholders their mission to progress a culture of mutual respect and dialogue across all backgrounds, beliefs, and nationalities.

The new body is empowered to provide guidance and counsel on realizing the goals of the Document on Human Fraternity for World Peace and Living Together signed by His Holiness Pope Francis of the Catholic Church and the Grand Imam of al-Azhar, His Eminence Sheikh Ahmed el-Tayeb, in Abu Dhabi, the capital of the United Arab Emirates (UAE), during the Papal visit in February this year. 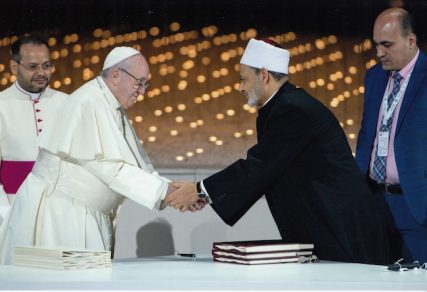 His Holiness Pope Francis and His Eminence Sheikh Ahmed el-Tayeb.jpg

Following the Higher Committee’s inaugural meeting at the Vatican earlier this month, the New York gathering was the second time the Higher Committee has met in two weeks, marking the start of a bold and collaborative journey to explore how people of goodwill across all faiths can create mutual understanding and global peace.

One of the first projects the Higher Committee will help guide is the Abrahamic Family House, to be located on Saadiyat Island in Abu Dhabi, the capital of the United Arab Emirates. A reflection of the Document on Human Fraternity, a church, mosque, and synagogue will share a collective space for the first time, serving as a community for inter-religious dialogue and exchange, and nurturing the values of peaceful co-existence and acceptance among different beliefs, nationalities and cultures.

The design of the Abrahamic Family House, by the award-winning and globally-renowned architect, Sir David Adjaye OBE, was unveiled at the New York event.

Reflecting on this historic initiative, His Eminence Elect Miguel Ángel Ayuso Guixot, President of the Pontifical Council for Interreligious Dialogue and Higher Committee member, said: “This endeavor is a profoundly moving moment for humanity. Although sadly evil, hatred, and division often make news, there is a hidden sea of goodness that is growing and leads us to hope in dialogue, reciprocal knowledge and the possibility of building – together with the followers of other religions and all men and women of goodwill – a world of fraternity and peace. I would like to thank the UAE for the concrete commitment shown on behalf of human fraternity.”

Commenting on the occasion, Judge Mohamed Mahmoud Abdel Salam, Higher Committee member and Former Advisor to the Grand Imam of al-Azhar, His Eminence Sheikh Ahmed el-Tayeb, remarked: “The formation of the Committee has come at an important time and has required all peace lovers to unite and join the efforts to spread coexistence, brotherhood, and tolerance throughout the world. I am moved by this energy and determination to spread the principles of the Document on Human Fraternity to achieve security, coexistence, and peace for everyone.  I was amazed by the mutual humanity concerns that both His Holiness Pope Francis of the Catholic Church and the Grand Imam of al-Azhar, His Eminence Sheikh Ahmed el-Tayeb, shared when they met last February; they were determined to achieve happiness for all humanity no matter the religion or nationality.”

Rabbi M. Bruce Lustig, Senior Rabbi at Washington Hebrew Congregation and a Higher Committee member said: “This is an important opportunity for all who believe in the power of faith and humanity. It will help build bridges between religious leaders and communities as well as foster peace and harmony in an era that is too often defined by difference. I am honoured to be part of such an esteemed group working to champion love over hate, justice over injustice, and faith over fear.”

Sir David Adjaye, Founder and Principal of Adjaye Associates, commented: “I am humbled and honored that our design has been selected. I believe architecture should work to enshrine the kind of world we want to live in, a world of tolerance, openness, and constant advancement. Architecture and landscape design can interpret the fabric and principles of a place, to advance the conversation, reassess current assumptions about the world, and discover more meaningfully what a place can give back. As an architect I want to create a building that starts to dissolve the notion of hierarchical difference – it should represent universality and totality – something higher that enhances the richness of human life. We hope we have set out a plan for a beautiful and thought-provoking space that celebrates the three faiths and stimulates dialogue and understanding at a critical time for the world. Built in the UAE’s capital, the space will be open to the world, and our hope is that through these buildings people of all faiths and from across society can learn and engage in a mission of peaceful coexistence for generations to come.”

The contemporary design was chosen after a rigorous process that included architects of diverse backgrounds and faiths from around the globe. Adjaye’s design is particularly striking, incorporating separate worship spaces for each religion as well as a shared space for collaboration and informal gathering. As a modern design concept it also reflects the goal of creating an enduring space for future generations.

About the Higher Committee for Human Fraternity
The Pope’s visit to the United Arab Emirates in February 2019 and the signing of the historic Document on Human Fraternity for World Peace and Living Together inspired leaders from across faith communities and wider society to create a bold new humanitarian mission.

Guided by the values and principles outlined in the Document on Human Fraternity for World Peace and Living Together, the Higher Committee’s global mission is to progress a culture of mutual respect and dialogue across all backgrounds, beliefs and nationalities.

This landmark initiative will be a place for learning, understanding and worship—open to all and a true reflection of the UAE’s values of tolerance and hospitality.

Within each of the houses of worship, visitors will have the opportunity to observe religious services, listen to holy scripture and experience sacred rituals. A fourth space—not affiliated with any specific religion—will serve as a center for all people of goodwill to come together as one. The community will also offer educational and event-based programming.

The landmark document addresses how people of different faiths can live together harmoniously. Pope Francis and the Grand Imam describe the need to adopt “a culture of dialogue as the path; mutual cooperation as the code of conduct; reciprocal understanding as the method and standard.”

The document also calls on world leaders “to work strenuously to spread the culture of tolerance and of living together in peace…to rediscover the values of peace, justice, goodness, beauty, human fraternity and coexistence in order to confirm the importance of these values as anchors of salvation for all, and to promote them everywhere.”