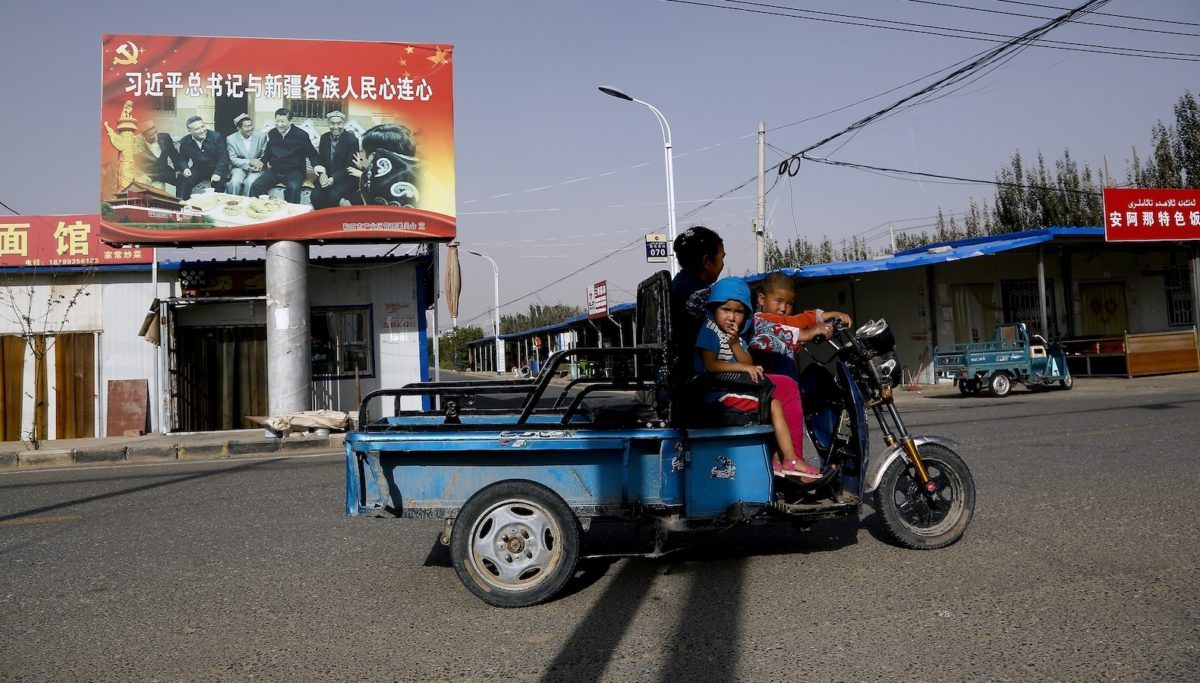 FILE - In this Sept. 20, 2018, file photo, an Uighur woman shuttles school children on an electric scooter as they ride past a propaganda poster showing China's President Xi Jinping joining hands with a group of Uighur elders in Hotan, in western China's Xinjiang region. Under Chinese President Xi Jinping, the Uighur homeland has been blanketed with stifling surveillance, from armed checkpoints on street corners to facial-recognition-equipped CCTV cameras steadily surveying passers-by. Now, Uighurs say, they must live under the watchful eye of the ruling Communist Party even inside their own homes. (AP Photo/Andy Wong, File)
September 25, 2019
Sarah DiLorenzo

NEW YORK (AP) — The Trump administration, locked in a trade war with China, is increasing pressure on Beijing over what it says is the systematic oppression of ethnic minority Muslims.

The U.S. State Department hosted a panel Tuesday (Sept. 24) on the sidelines of the U.N. General Assembly gathering in New York to highlight the struggle of Uighurs, whose native land in China's far western Xinjiang province they say is a police state.

Three Uighurs recounted how the Chinese have placed their brethren in "reeducation camps," forced them to live with minders — or spies — in their homes, and surveilled and harassed them both at home and abroad in an attempt to eradicate their way of life and enforce their silence.

"China's at war with faith," said Sam Brownback, the U.S. ambassador-at-large for international religious freedom. He noted that American concerns extend beyond the predominantly Muslim, Turkic-speaking Uighurs to Tibetans, Christians and the banned spiritual movement known as Falun Gong.

"They're at war with all faiths," Brownback said.

China vehemently denies this. It says the camps in Xinjiang are for vocational training and, since the Sept. 11 terrorist attacks, it has defended any crackdowns on Uighurs as necessary in the name of rooting out Muslim extremists.

American officials said they hoped that by bringing the stories of Uighurs to a broader public through Tuesday's event, they would raise awareness of the severity of the oppression and encourage other countries and the United Nations to pressure China.

Congress is also weighing a bill that would condemn the treatment of Uighurs and ask the administration to consider sanctions.

Officials also noted that the efforts fit a broader priority for the administration: protecting religious freedom the world over.

President Donald Trump put the subject front and center on Monday, mostly skipping a global climate summit to focus on a meeting focusing on religious persecution.

"The event today, I think, demonstrates the approach that we're taking — which is to raise the temperature of the water ... and give the Chinese government, the Communist Party, a chance to reform and address this issue," said David Stilwell, assistant secretary of state for East Asian and Pacific Affairs.

"The president really wants to work with the Chinese here both in terms of trade and a number of other areas," he said.

Both sides have raised tariffs on billions of dollars of each other's imports in the fight over complaints about China's trade surplus and technology development plans.

Zumrat Dawut, who survived a detention camp and is now living in the United States with her family, recounted how she was shackled and hooded on the day she was detained. She was prevented from showering, denied food when she tried to help a fellow prisoner — and even sterilized.

Even before the camps, some Uighurs recounted being assigned "relatives" from the Han majority — a well-documented practice that the Chinese have portrayed as a cultural exchange but that Uighurs say is aimed at undercutting their religion and way of life.

A 20-year-old man was assigned to be her 12-year-old daughter's "relative," and he would demand to see her dressed well and ask to take her with him out of the house.

"Even people outside the camps are not free," she said. "They are living in an outdoor prison."

(Sarah DiLorenzo has covered global affairs for The Associated Press on five continents since 2008. Follow her on Twitter at @sdilorenzo.)