As he canvassed his neighborhood to talk to residents about his campaign for City Council this summer, the Santa Ana historian and archivist stumbled upon a Virgin of Guadalupe shrine tucked inside a hollow portion of a tree. Flowers and rocks surrounded the small statue.

“I almost didn’t see it,” said Escamilla, 33. “To me, it’s one of the most beautiful shrines because it uses its natural alcove.”

Walking block by block as he trolled for votes, Escamilla noticed the wide array of Virgin of Guadalupe shrines, some of which he was familiar with from growing up in Santa Ana.  Nearly 80% of the residents of the city, the second largest in Orange County, are Latino, many of Mexican heritage. The brown-skinned Virgin, the patron saint of Mexico, finds her way into many yards, homes and businesses.

Spotting them became a sideline while campaigning, said Escamilla, who is running in a special election to replace a former councilman found to have committed election fraud. Escamilla’s urban planning background prompted him to document the altars with his phone’s camera. This month he has begun sharing the images in a slideshow on Instagram as he continues walking the city.

“I always thought that these were really unique to the city … and to Latino communities,” said Escamilla, who sees them as signifiers of his hometown’s identity. 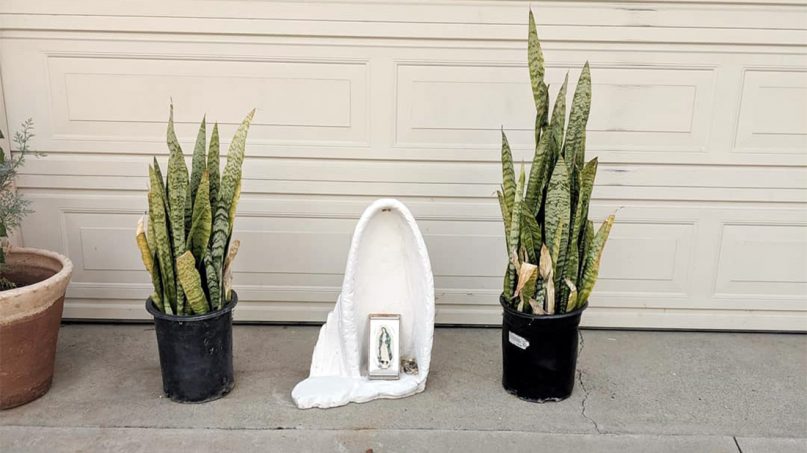 The feast of Our Lady of Guadalupe is Dec. 12, when many parishes in Southern California mark the appearance of Mary to St. Juan Diego, an indigenous man, near Mexico City in 1531. But many shrines in Latino neighborhoods are displayed year-round.

For some, the Virgin of Guadalupe helps clear the innocent of wrongdoing and heals the sick. For others, she’s a symbol for immigrants and of the fight against community injustices.

In Los Angeles, images of the Virgin are believed to thwart vandalism and be “protector(s) of small businesses,” according to journalist Sam Quinones’ 2016 book of photographs of murals of the saint, “The Virgin of the American Dream.” One photo captures a mural showing Cesar Chavez, the legendary migrant-worker union leader, with the Virgin praying. Another depicts the Virgin surrounded by roses and floating kitchen products like oil and a packet of sugar.

Though he is not Catholic, Quinones told Remezcla, an alternative Latino arts and culture site, that the Virgin has a place in his heart, “for what she means to poor people, people seeking refuge or some kind of tenderness when buffeted by the powerful winds of economic necessity, illness, or some other problem for which they have no means to a solution.”

“She always seemed quite apart from the church,” he said. 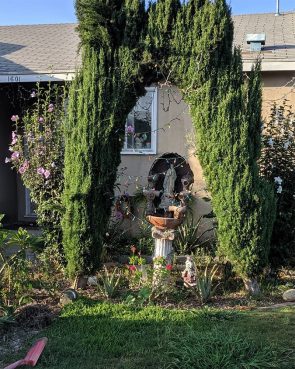 The shrines Escamilla has recorded on social media vary widely in size and decoration. One statue takes shelter inside a wooden structure festooned with flowers, while another altar simply includes a small frame with a picture of the Virgin beside two plants.

Once the election is over, Escamilla said, he would like to return to those homes to gather family stories and origins of their makeshift shrines.

For now, he’ll continue to walk the city streets to learn about neighborhood concerns. Housing costs, homelessness and public safety have been big topics of discussion.

Raised Catholic, Escamilla calls himself “mildly religious.” But as he seeks office, Escamilla said his Catholic upbringing has served as his “moral background and moral outlook on life.”

“Being (of) service to others … to be kind to your neighbor,” he said.