VATICAN CITY (RNS) — During informal conversations with Jesuit clergy in Africa, Pope Francis opened up about his spirituality after being made pope — and criticized clericalism in the Catholic Church for its fixation on sex rather than equity and integrity.

“One dimension of clericalism is the exclusive moral fixation on the sixth commandment (which in the Catholic Bible is the prohibition on adultery),” Francis told 24 Jesuit priests sitting in a circle around him in Mozambique on Sept. 5.

“We focus on sex and then we do not give weight to social injustice, slander, gossip and lies. The church today needs a profound conversion in this area.”

The closed-door meeting took place during Francis’ Sept. 4-10 papal visit to the African countries of Mozambique, Madagascar and Mauritius. The official transcript was published Thursday (Sept. 26) by the Jesuit-run magazine La Civiltà Cattolica.

“Great shepherds give people a lot of freedom,” the pope continued. “The good shepherd knows how to lead his flock without enslaving it to rules that deaden people. Clericalism, on the other hand, leads to hypocrisy, even in religious life.”

A master communicator, Pope Francis holds his own amid the large crowds that usually follow such an influential faith figure, but private and off-the-cuff conversations such as the one with the Jesuits in Africa are treasured by Vatican observers as an opportunity to peek into a less measured, more authentic side of the Argentine pontiff. 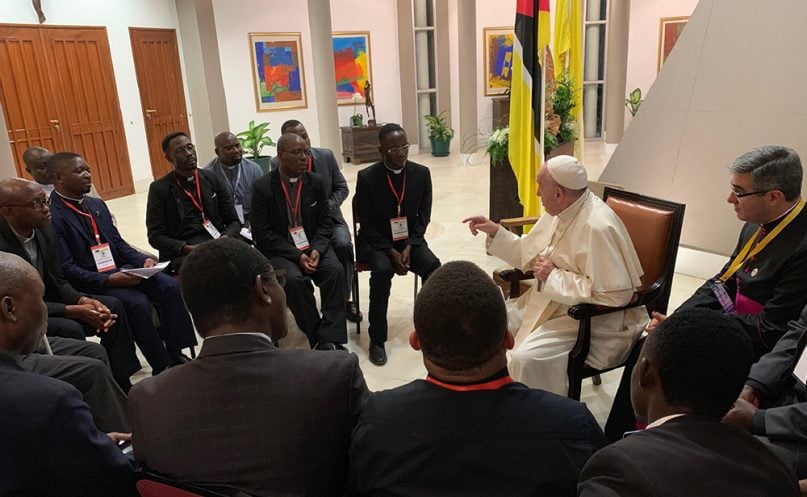 Pope Francis meets with African Jesuits in Mozambique on Sept. 5, 2019, during his recent three-country visit to the continent. Photo by Antonio Spadaro/La Civiltà Cattolica

One of the priests present at the meeting asked Francis if his experience of God had changed after his election as pope. After taking some time to reflect on a question that is rarely asked to a pope, Francis answered that there had been no radical change.

“I commit the same sins as before,” he said. “My election as pope did not convert me suddenly, so as to make me less sinful than before. I am and I remain a sinner. That’s why I confess every two weeks.

“The mere fact that I now dress all in white has not made me any less sinful or holier than before.”

The pope said he gets great “comfort” by reading the troubled story of the Apostle Peter, whom he described as “the hypocrite, the man of compromise” and who, in several passages of the Gospels, struggled with his faith and “slipped into the slavery of fear.”

“This helps me to understand that there is no magic in being elected pope. The conclave doesn’t work by magic,” Francis said.

A significant chunk of the conversation with the Jesuit priests revolved around the issue of clericalism, which Pope Francis has bemoaned on several occasions as being responsible for some of the deepest wounds in the Catholic Church, from financial irregularity to sexual abuse.

Francis said that “clericalism is a direct consequence of rigidity,” which hides “serious problems.” He gave the example of three unnamed dioceses where he had to intervene because religious rigidity had made way for “moral problems and imbalances.” 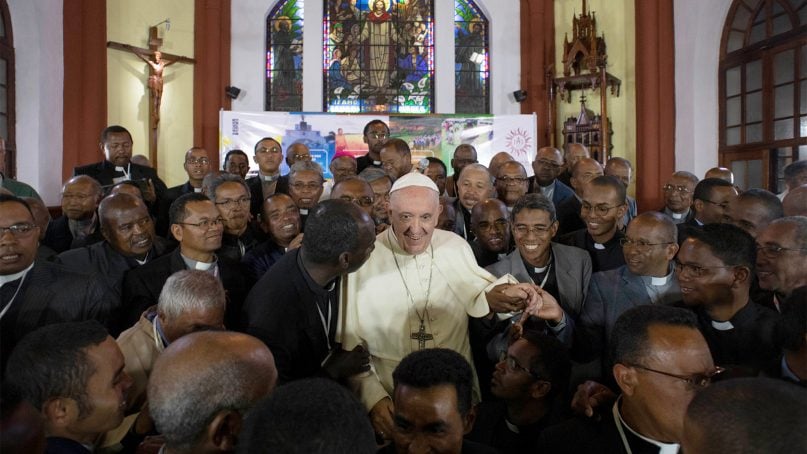 Pope Francis joins African clergy for a large group photo during his recent three-country visit to the continent. Photo courtesy of Vatican Media

Another question focused on the pope’s Worldwide Network of Prayer, which coordinates faithful people around the world in prayer with Pope Francis on a specific question or issue. Francis expressed a desire to teach more people the importance of prayer for intercession.

“The pope is tempted, he is very besieged: Only the prayer of his people can free him, as we read in the Acts of the Apostles,” he said. “When Peter was imprisoned, the church prayed incessantly for him. If the church prays for the pope, this is a grace. I really do feel the need to beg for prayer all the time. The prayer of the people is sustaining.”

The pope was also asked about concerns that are particular to the countries he visited, where Catholics and Protestants work shoulder to shoulder in bringing forward their view of the gospel and the Christian faith.

Francis made a clear distinction between evangelization, which he described as “a witness,” and proselytizing, which he instead defined as “convincing.”

He criticized religious sects, distinct from Catholic and Protestant faith groups, that use proselytizing as a means to develop a “servile dependence at the level of the conscience and the society.” Evangelization, on the other hand, is meant to treat the believer as a child, not a slave, who is then “free and able to grow,” he said.

The pope also addressed increased xenophobia in some areas of the African continent, condemning it as “part of a populist mentality that leaves no sovereignty to the people.” Francis offered an encompassing definition of people that includes those who were not born in a country or who have their roots in another place or ethnic background.

“Today we are tempted by a form of sterilized sociology, where you consider a country as if it were an operating theater, where everything is sterilized: my race, my family, my culture … as if there were the fear of dirtying it, staining it, infecting it,” he said.

“Building walls means condemning yourself to death. We can’t live asphyxiated by a culture as clean and pure as an operating theater, aseptic and not microbial,” he added.