COACHELLA, Calif. (RNS) — It’s been more than a decade in the making.

They were asked to pray for it with family and during meals. They fundraised for it, selling tacos and other food after Mass. They sacrificed for it, maybe scaling back on that vacation or reconsidering buying that new big screen TV.

Parishioners of Our Lady of Soledad Catholic Church in the city of Coachella will soon see their offerings materialize into a new church that will accommodate 1,200 people — nearly double the amount their current church can hold. The new parish, which is less than a mile away, will be dedicated Dec. 7. It cost about $6.5 million to build the new church, which has been in the planning stages since 2007.

The Rev. Guy Wilson, pastor of Lady of Soledad, sees the church serving as a hub for the residents and interfaith groups in the growing Coachella region. He envisions hosting forums during election season and events for nearby churches that are not just Catholic.

The parishioners, he said, have shown immense dedication to see this space through.

“It’s been a sacrifice,” said Wilson.

Wilson estimates about 85% of Coachella’s 45,000-plus residents are Catholic. In an 18-year span, the city has grown by 22,911 residents and is largely working-class and Latino. 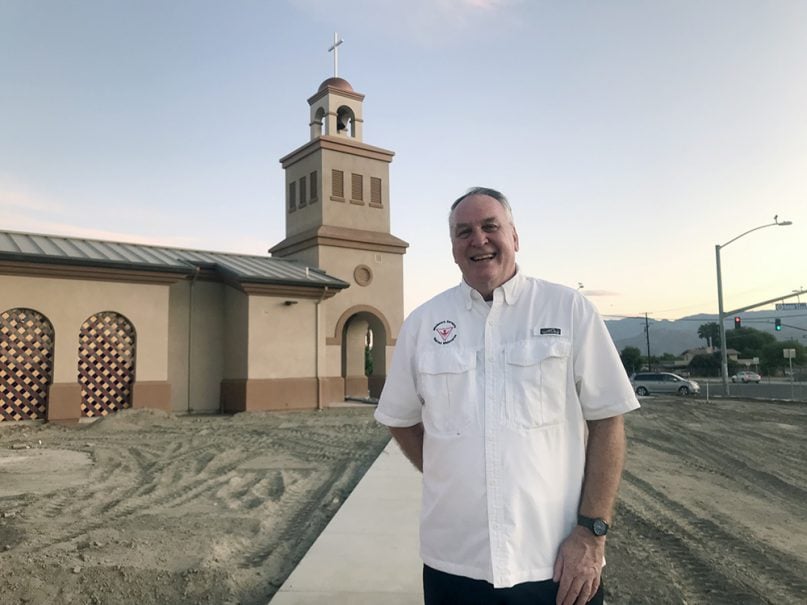 The Rev. Guy Wilson, pastor of Our Lady of Soledad Catholic Church, sees the church serving as a hub for the residents and interfaith groups in the growing Coachella region. RNS photo by Alejandra Molina

Although the Catholic Church has seen a decline in membership in recent years, the Diocese of San Bernardino — which serves Riverside and San Bernardino counties — has experienced continuous growth. The diocese in 2014 reported 1.5 million Catholics; today it’s grown to 1.7 million, said John Andrews, spokesman for the diocese.

This rise can be attributed to the growing number of families heading east from Los Angeles and Orange counties and settling in the Inland Empire for more affordable housing. However, Bishop Gerald R. Barnes said Pope Francis also has something to do with it. Francis, Barnes said, has had a positive impact on those who don’t affiliate with a church and those who at one point identified as Catholic but have left the church.

That growth is noticeable at Our Lady of Soledad, which was built in 1971.

Our Lady of Soledad hosts seven Masses Saturdays and Sundays. It baptizes about 40 infants every month. The church also has four missions, primarily in farmworker communities. Mass at the church fills up and some people have to tune in from a hall through video and a sound system.

“It just keeps growing,” said Wilson, who has been with Our Lady of Soledad since 2012.

Since last October, the parish has processed hundreds of asylum-seekers by providing them with meals and clothing and making travel arrangements so they could reunite with family across the country while they await court dates. These are tasks that would normally fall on the federal government, but immigration officials have seen themselves overwhelmed by the number of migrants seeking asylum. 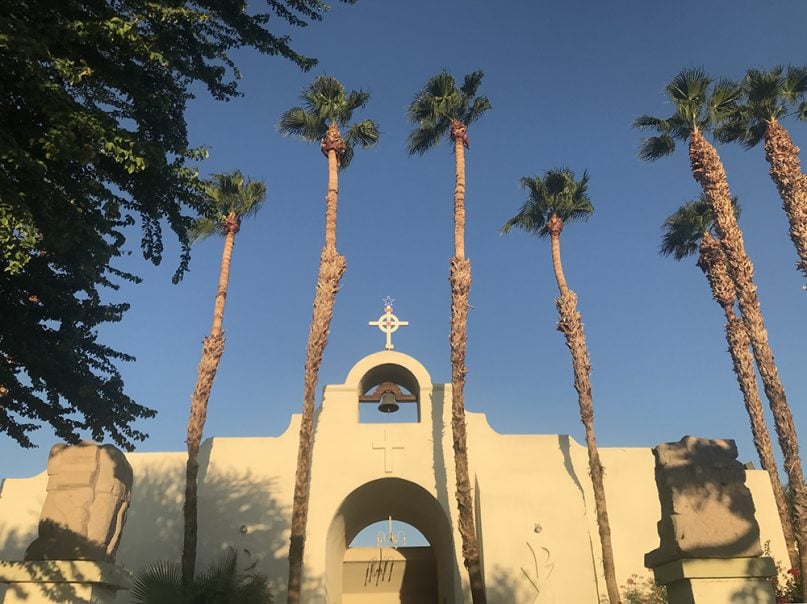 The current Our Lady of Soledad Catholic Church will be used as a parish hall and conference center once the new sanctuary opens. RNS photo by Alejandra Molina

Our Lady of Soledad stepped in when “our people started finding them on the streets at the bus stations,” Wilson said. The asylum-seeking families have stayed in the church’s retreat center, which can accommodate about 105 people.

“These were all young families. They didn’t know what to do next. They did not have the resources,” Wilson said.

Carlos Pitones, an agent with the El Centro sector of U.S. Customs and Border Protection, said the government sought help from the church as well as from other nonprofits. Pitones said the agency did drop off migrants at bus stations “for a small period of time prior to being able to reach out to those additional NGOs that would be able to assist us.”

With state funding, Wilson said, the church was able to hire staff to assist migrants through the month of October this year. Our Lady of Soledad is not currently assisting any asylum-seekers as the Trump administration has returned thousands of Central American migrants to Mexico under the “Remain in Mexico” program.

“The need is true. … It’s more than just people wanting to have a better job. It’s people running for their lives,” Wilson said.

Wilson said the church is anticipating another rush of asylum-seeking migrants this fall as temperatures cool down. “We recognize at one point the immigrants will be allowed to come into the country for the asylum process,” he said.

This time, they’ll be more than ready, Wilson said. An aerial view of the new Our Lady of Soledad Catholic Church that is nearing completion in Coachella, California. Photo courtesy of Catholic Extension

“We’re grateful for the outreach of our people. This is not a high-income area,” Wilson said. This is a lot of farmworkers and most of the people who live and are part of the parish, they work in the industries of the hotels and the big golf resorts.

“A lot of them are working the fields … they were the most generous. They were coming with clothing, food, coming to help out,” he added.

It’s this kind of generosity that Wilson said has helped the parish secure the funding needed for the new facility.

One donor who belongs to a neighboring church granted $1.1 million, while another family that vacations in the area donated about $900,000 to build a chapel in front of the parish, Wilson said. Catholic Extension, a nonprofit that invests in churches and ministries in poor communities, contributed with $60,000. Our Lady of Soledad secured a $2 million loan from the diocese that it will pay for over 10 years, Wilson said.

The rest of the money was raised by fundraising within the community.

For the past three years, many families have been contributing every two weeks in a special collection.

“Some of them as a family decide to do maybe without certain restaurant meals,” Wilson said. “A lot of them, they make the sacrifice.

“The blessing we have is we have so many people who come to this church,” Wilson added. “So in volume, everyone is trying to contribute what they can.”