NEWBERG, Oregon (RNS) — The images of marchers with tiki torches chanting “You will not replace us!” at the Unite the Right rally in Charlottesville, Virginia, are still vivid in Brenda Salter McNeil’s mind.

They looked just “like any other student,” Salter McNeil said.

She wondered if any of them could have been Christian students.

“There’s a majority of students on Christian colleges and university campuses who think racial reconciliation and diversity are some sort of a radical, liberal, politically motivated social agenda,” she said. “They don’t believe this has anything to do with their faith. 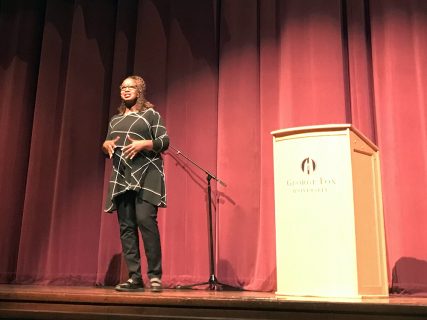 Brenda Salter McNeil closes the Diversity Conference of the Council for Christian Colleges and Universities with a discussion about “Diversity as Discipleship” on Oct. 5, 2019, in Newberg, Oregon. RNS photo by Alejandra Molina

“It raises the question of what type of disciples we’re forming, and what kingdom we’re educating them to be obedient to.”

Salter McNeil, an associate professor at Seattle Pacific University, took the stage Saturday (Oct. 5) at George Fox University in Newberg to talk about what she called “diversity as discipleship” at the Council for Christian Colleges and Universities Diversity Conference.

About 300 people attended the conference Oct. 4-5. It was a consortium of Christian university presidents, human resources professionals, faculty and administrators seeking ways to diversify their campuses. This was the third such gathering for the Council for Christian Colleges and Universities (CCCU), an evangelical association of more than 180 schools.

In this space, people examined anti-racism advocacy and cultural responsibility through biblical theology. Many said they sought inclusivity in their Christ-centered institutions in order to “look more like the kingdom of God” and to be a place that is “reflective of the kingdom of heaven.”

Newman said inviting people to apply for open positions has made a difference. To Newman, seeing results means “making sure we have gone everywhere and anywhere and recruited.” This process may take longer, but it will be worth it, he said.

“We live in this culture where convenience has become a big thing,” Newman said. Shirley Hoogstra, president of the Council for Christian Colleges and Universities, moderated a panel of presidents of five Christian colleges to talk about fostering racial and ethnic diversity on their respective campuses.

The panelists were all white. Hoogstra noted that only one Christian college within the CCCU network in the United States had a president of color.

During the panel discussion, the presidents discussed their own identities and upbringing and how they bring those experiences into their work.

David Hoag, president of Warner University, recalled growing up in Northern Ohio around the family greenhouse that his great-grandfather started after the Great Depression. He remembered many caucasians didn’t want to work at the greenhouse and how he was surrounded by Latinos who did want to fill those jobs. That’s how he was exposed to Latinos, their food and “the joy of their community.” His family, he said, were the only growers who offered them health insurance in the area. He described the relationship between the workers and his family as a partnership.

“I was so modeled by my family as to how they would treat others,” Hoag said.

During the discussion, Ron Matthews, president of Eastern University, acknowledged leading an institution with a largely male board. Robin Baker, president of George Fox, talked about creating pathways for diverse staff to enter leadership positions. Hoag expressed the need to broaden their network of speakers.

“In our spiritual formation programming, we don’t use the old white church of God rolodex anymore,” Hoag said. 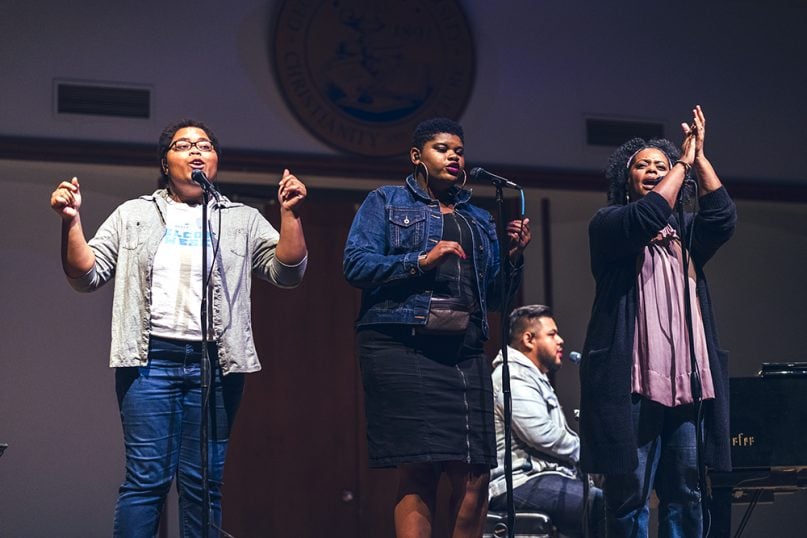 People lead a worship song during the Council for Christian Colleges and Universities Diversity Conference on Oct. 4, 2019, at George Fox University in Newberg, Oregon. Photo courtesy of Fletcher Wold Photography

To Rebecca Hernandez, chief diversity officer for George Fox University, themes surrounding social justice and inclusivity should be embraced, not rejected or ignored by faith-based institutions.

Hernandez, who helped spearhead the conference, said there are misconceptions that Christian schools “are conservative, pretty racist.

“Jesus was about diversity. We all can point to different stories in biblical text where Jesus did the opposite of what the people at the time did,” Hernandez said.

To Salter McNeil, who preached about diversity as discipleship, it’s crucial to “stop separating the fact that somehow I can be a spiritual person and not care at all about what’s happening in the world to other people.