VATICAN CITY (RNS) — A United Nations representative for the rights of indigenous peoples who is participating in the Catholic bishops synod on the Amazon said Tuesday (Oct. 8) that the church still has a ways to go in terms of women’s representation.

Victoria Lucia Tauli-Corpuz, the U.N. special rapporteur on the rights of indigenous peoples, criticized the lack of female representation at the synod, which began Sunday at the Vatican and continues through Oct. 27.

Only a handful of indigenous women are there, she noted in an interview with Religion News Service. “Some of them are young — that’s good — but of course it’s still dominantly men.

“I think it’s a problem,” she said. “The church really needs to realize the importance of equality between genders, in the church and outside the church.”

At the summit, 185 male participants are attending and have the right to vote on the proceedings. Another 80 people, including 35 lay and religious women, are allowed to participate but are unable to vote. Seventeen representatives of indigenous populations are also attending, including nine women. 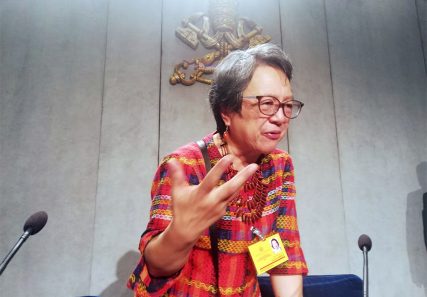 Tauli-Corpuz is an indigenous leader from the Kankana-ey Igorot people in the Philippines and has a decades-long career in promoting the rights of indigenous communities and women. She has participated in several conferences on the Amazon region alongside church representatives in the past year and is among the experts invited to attend the Vatican synod of bishops.

Her comments come at a time when the Vatican is addressing differing solutions as to how to better minister and evangelize to the indigenous communities in the Amazon. Proposals have just started to circulate in the closed-off halls of the synod, addressing issues ranging from better formation for seminarians, pastors and laypeople to the possibility of ordaining married men to cater to isolated communities.

During a news conference at the Vatican on Tuesday, Paolo Ruffini, prefect for the Vatican’s communication departments, presented a summary of what the bishops are addressing.

He stopped short just before listing synod discussions on allowing women to carry out baptisms and weddings. The document summarizing the synod proceedings that was given to journalists stated that the possibility of female ordination was also part of the discussion.

“Among the proposals that were brought forth,” the briefing reads, “is that of thinking about the possibility of ordaining women to the diaconate, so as to emphasize their ecclesial vocation.”

Women deacons would be able to preach, distribute Communion and officiate at weddings, baptisms and funerals but not hear confessions or act as celebrants during the Eucharist.

Despite concerns regarding a lack of female participation, Tauli-Corpuz stated that “the atmosphere is really good” in the synod hall and said bishops are taking a keen interest in human rights violations occurring in the Amazon region, which today is threatened by climate change, cultural colonization and global economic interests.

“The church has a role to play in stopping these kinds of violations,” she said. “I am hopeful. The church is very influential, and they have their resources, both moral and financial, so I think that is a good thing.”

The representative of the Pan Amazonian Catholic Network REPAM, Franciscan laywoman Moema Maria Marques de Miranda, was also optimistic about the proceedings, presenting Pope Francis and climate activist Greta Thunberg as positive voices “for a life that is compatible with the environment.”

“Understanding the emergency of the environmental crisis brings together different viewpoints that must meet and find points of contact,” she said, adding that “no one can build bridges over an abyss.”