VATICAN CITY (RNS) — Pope Francis’ “guardian angel” handed in his wings on Monday. Domenico Giani, the head of the Vatican police force, submitted his resignation amid the latest leaks and scandals surrounding the Catholic institution’s finances.

“In order to assure the proper serenity to the ongoing investigation,” the statement Monday (Oct. 14) by the Vatican reads, “and although the Commander bears no personal responsibility in the unfolding of the events, Domenico Giani has tendered his resignation to the Holy Father out of love for the Church and faithfulness to Peter’s Successor.”

The statement acknowledges that the perpetrator of the latest leak “remains unknown,” even though it was distributed only among the Vatican police force, the Gendarmerie, and the Swiss Guards. The statement also says that Francis recognizes Giani’s “unquestionable faithfulness and loyalty,” which guaranteed “a lasting atmosphere of ease and security around the Holy Father.”

According to local media outlets, the reason behind Giani’s dismissal is due to the latest wave of leaks surrounding foreign investments by the Vatican Secretariat of State. A document obtained by Italian news magazine l’Espresso on Oct. 2 and signed by the former police head showed pictures of five Vatican employees barred from entering the Catholic city-state.

The pictures of the people in question, two of whom are employed in high-profile institutions in the Vatican (the Vatican anti-money laundering organization AIF and the Secretariat of State), resembled mugshots even though the document made no mention of the nature of the allegations against them.

“An inquiry was launched by the Holy Father,” said Vatican spokesmen Matteo Bruni to local media this weekend, “on the illicit distribution of a document intended for internal use by the security forces of the Holy See.”

Bruni said that “the gravity” of this leak is comparable, in the words of Pope Francis, “to a mortal sin, because it is damaging to the dignity of the people and of the principle of presumption of innocence.”

Rumors that Francis was looking to assign the head of the Vatican Gendarmerie to another position have been circulating for months. But a closer look at the 20-year tenure of the “comandante” raises questions as to why he was allowed to continue in his position for so long. 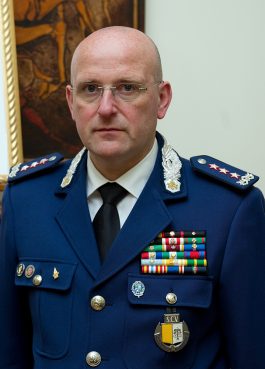 In 1999, Giani became the deputy of Camillo Cibin, former Vatican police chief, and tackled a woman attempting to attack then-Pope Benedict XVI during Christmas celebrations in 2008 and again in 2009. Giani became inspector general of the Gendarmerie Corps in June 2006 and the personal bodyguard to Pope Francis and his predecessor.

Giani has been a fixture at papal audiences and apostolic visits for two decades, a time that included some of the most perilous moments in the Catholic Church. The Vatileaks scandals in 2012 and 2015 shed light on the administration of Vatican finances by the Institute for Religious Works, also known as the Vatican bank. Both these scandals occurred during Giani’s tenure and he led the investigations on the cases.

In an interview in Italian released on l’Osservatore Romano on Monday, Giani said he recognized that the recent release of the document “certainly trampled on the dignity” of the people concerned and that he himself “felt shame for what happened.”

“I tried to carry it out with self-denial and professionalism but feeling serenely like a ‘useless servant’ who has done his little part to the end,” he told the Vatican media.

“For this reason, having always said and testified my readiness to sacrifice my life to defend that of the pope, with this same spirit I have made the decision to hand in my resignation so as not to damage in anyway the image and activity of the Holy Father,” he said.

Giani oversaw numerous reform efforts by three popes to bring order, transparency and accountability into the Vatican finances. He also coordinated the Vatican Fire Department and was a member of the Financial Security Committee created by Pope Francis in 2013 to prevent money laundering, the financing of terrorism and the proliferation of weapons of mass destruction.

Giani’s role in promoting Francis’ financial reform was put into question in 2017, when the then-auditor general at the Vatican, layman Libero Milone, was forced to resign after being charged with alleged double-dipping on expenses amounting to $33,000 and espionage. All charges against Milone were dropped, but the former financial inspector claimed in interviews that Giani forced him to resign under duress.

The former police head, who has a background in the Italian secret service, was also embroiled in a 2013 scandal surrounding the arrest on money laundering charges of Italian Monsignor Nunzio Scarano, former auditor at the Administration of the Patrimony of the Apostolic See, the Vatican’s financial powerhouse that controls both its investment portfolio and its real estate holdings.

Media outlets also questioned the funding of Giani’s expensive work on his apartment near the Vatican as confirmed by several Italian news outlets and sources near the Vatican. The complex profile that emerges is hard to place within Pope Francis’ often-stalled financial reform efforts.

There has been no announcement as to what position Giani will continue to occupy within the Vatican, if any, and in the context of reports of a looming financial scandal in the Vatican — a possible new Vatileaks — there are questions of whether the commander’s resignation will be the last one we’ll see in the coming months.

“Unfortunately, within the Vatican, the sense of loyalty and fealty to the institutions is falling short,” said Italian Cardinal Angelo Becciu, former deputy secretary of state who was tapped to head the Vatican Congregation for Saints’ Causes by Pope Francis, in a recent interview with Italian TV network Mediaset.

Becciu’s name has been linked to investments of Vatican finances in London real estate and in his remarks he spoke of the necessity of “receiving the pope’s appeal to be a united community.”