(RNS) — Each week Religion News Service presents a gallery of photos of religious expression around the world. This week’s gallery includes Arbaeen in Iraq, indigenous goddess Maria Lionza in Venezuela and more. Honor guard soldiers carry a cross bearing the words “Elena The Queen” during the ceremony for the repatriation of the remains of Helen of Greece and Denmark, at the Henri Coanda Airport outside Bucharest, Romania, Friday, Oct. 18, 2019, Romania’s longtime Queen Mother, Helen, who was awarded the Righteous Among Nations honorific by the state of Israel for her contribution to saving Jews during WWII, will be buried in Romania from Lausanne, Switzerland, where she passed away in 1982 at the age of 86. (AP Photo/Andreea Alexandru) 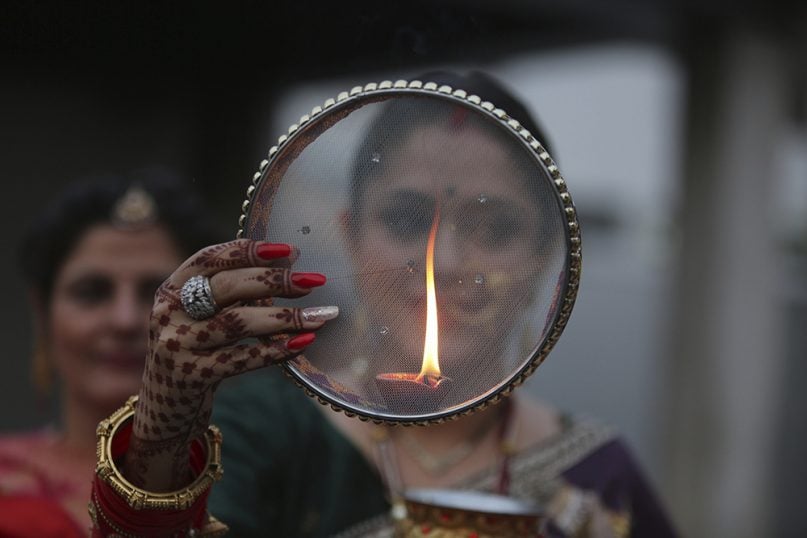 A Hindu woman performs a ritual before breaking a day-long fast during ‘Karwa Chauth’, in Jammu, India, Thursday Oct. 17, 2019. During this festival celebrated in northern India, married women fast throughout the day and offer prayers to the moon for the welfare, prosperity, and longevity of their husbands. (AP Photo/Channi Anand) 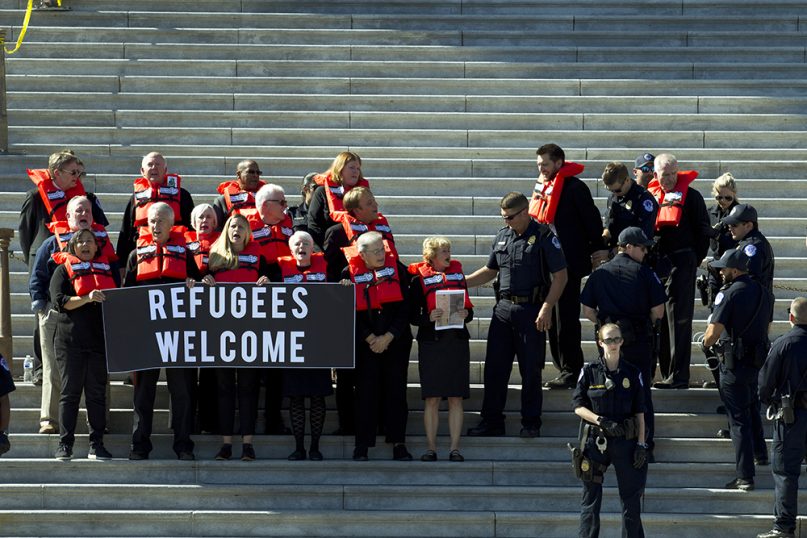 Faith leaders and members of human rights groups, wearing life vests to symbolize life-saving refugee programs, are arrested during a protest calling on Congress not to end refugee resettlement program, at the steps of the U.S. Capitol in Washington, on Oct. 15, 2019.  (AP Photo/Jose Luis Magana) 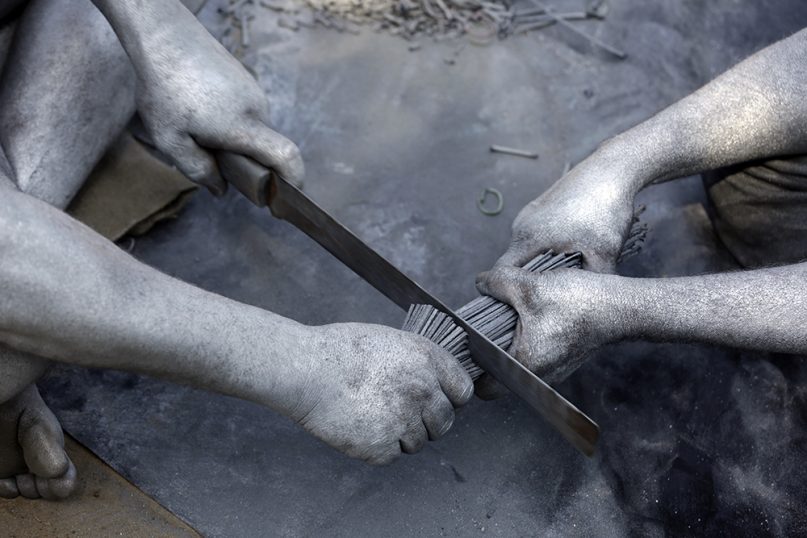 Indian workers cuts wicks to make firecrackers for the upcoming Hindu Diwali festival at a factory on the outskirts of Ahmadabad, India, Tuesday, Oct. 15, 2019. Fire crackers are in huge demand in India during Diwali, the festival of lights, which will be celebrated on Oct. 27. (AP Photo/Ajit Solanki) Followers of Maria Lionza lie amid candles and white-powder designs inside a circle called an oracle, on Oct. 13, 2019, during a ritual for prosperity on Sorte Mountain where followers of indigenous goddess Maria Lionza gather annually in Venezuela’s Yaracuy state. Venezuela is predominantly Roman Catholic, and the church disapproves of the folk religion but has long since abandoned its attempts to suppress it. (AP Photo/Ariana Cubillos) 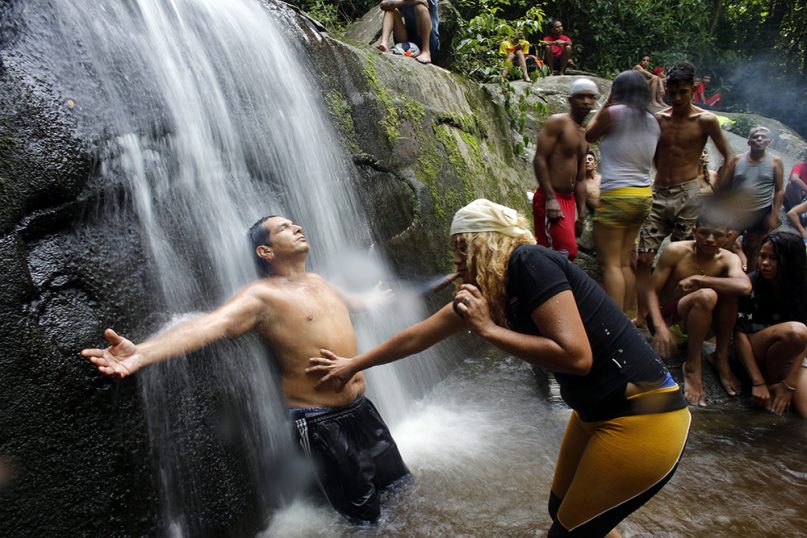 A spiritual guide known as a “madrina,” right, performs a ritual on a man training to become a medium to receive spirits into his body on Sorte Mountain, on Oct. 12, 2019, where followers of indigenous goddess Maria Lionza gather annually in Venezuela’s Yaracuy state. The tradition is hundreds of years old and draws on elements of the Afro-Caribbean religion Santeria and indigenous rituals, as well as Catholicism. (AP Photo/Ariana Cubillos) 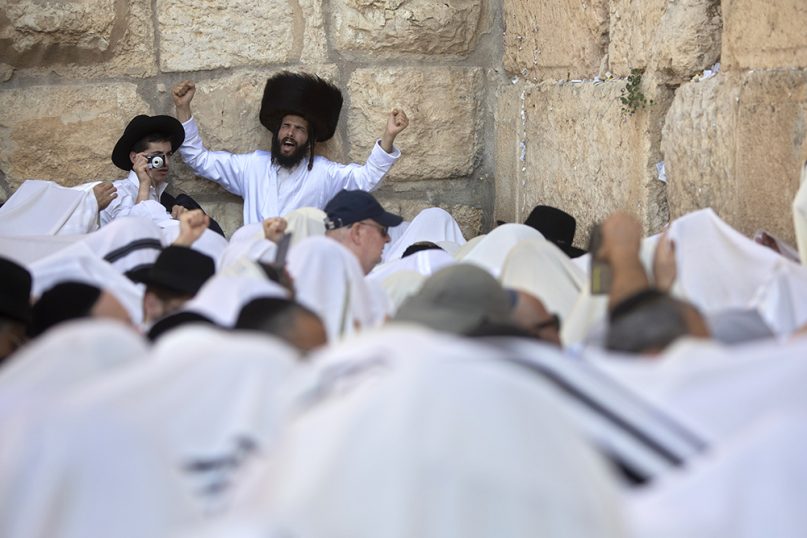 Ultra-orthodox Jewish men of the Cohanim priestly caste, pray as they participate in a blessing during the Jewish holiday of Sukkot at the Western Wall, in Jerusalem’s old city, Wednesday, Oct. 16, 2019. The Cohanim, believed to be descendants of priests who served God in the Jewish Temple before it was destroyed, perform a blessing ceremony for the Jewish people three times a year during the festivals of Sukkot, Passover and Shavuot. (AP Photo/Sebastian Scheiner) 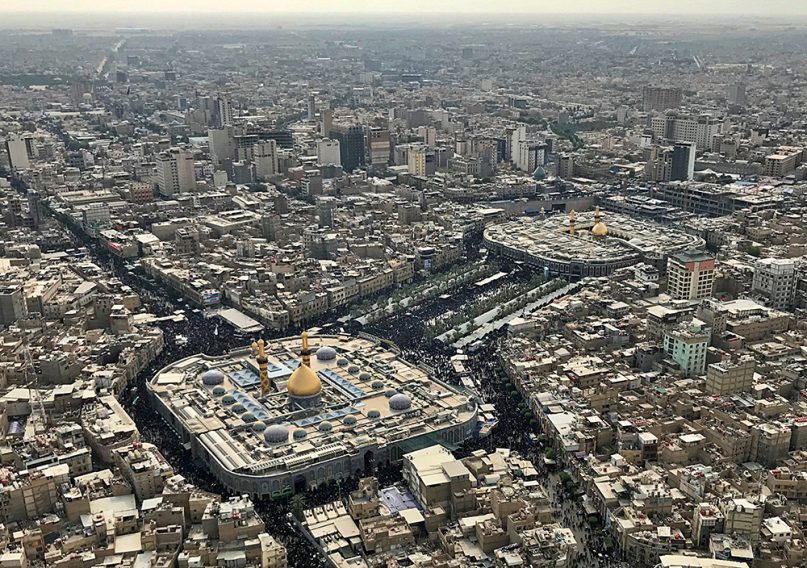 Shiite pilgrims seen from a helicopter as they gather between and around the holy shrines of Imam Hussein and Imam Abbas ahead of the Arbaeen festival in Karbala, Iraq, Thursday, Oct. 17, 2019. The holiday marks the end of the 40-day mourning period after the anniversary of the martyrdom of Imam Hussein, the Prophet Muhammad’s grandson in the 7th century. (AP Photo/Ali Abdul Hassan) 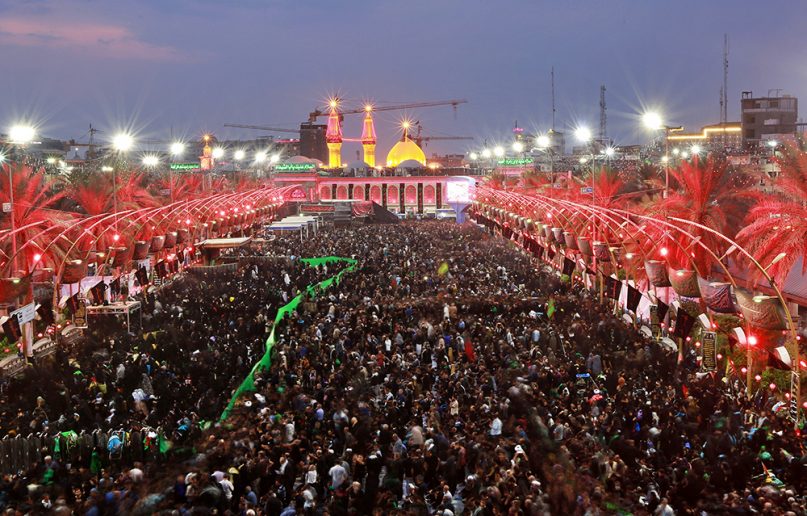 Shiite Muslim worshippers gather around the holy shrine of Imam Hussein, in the background, ahead of the Arbaeen festival in Karbala, Iraq, Thursday, Oct. 17, 2019. The holiday marks the end of the 40-day mourning period after the anniversary of the martyrdom of Imam Hussein, the Prophet Muhammad’s grandson in the 7th century. (AP Photo/Hadi Mizban)