(RNS) — A Muslim employee has filed a discrimination complaint against the New York State Department of Motor Vehicles for allegedly denying his repeated requests to attend weekly religious services.

“Because I am observing my faith at work, my job is at risk,” the employee, whose name was not made public, said in an affidavit filed Friday (Oct. 18) by the Council on American-Islamic Relations-New York, a civil rights group. “I believe I am being punished and retaliated against because I am observing my religious practice of attending congregational prayer.”

Last week, CAIR also filed two separate complaints with the Equal Employment Opportunity Commission involving allegations of discrimination against Muslim workers. One involves a Delaware woman who claims she was prohibited from clocking-in to work at a detention center because of her hijab and was told she was “looking like a terrorist.” The other is a wrongful termination claim against Walmart on behalf of an Ohio employee whose coworkers and managers allegedly made hostile comments such as “Muslims should not be in America,” and “Muslims kill Americans … Trump will stop that.”

The complaint against the New York DMV was brought on behalf of a 40-year-old Bengali man who has worked as a part-time Motor Vehicle representative since January. 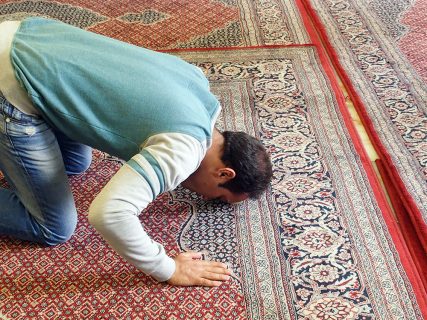 A Muslim man in prayer. Photo by Rudolf Langer/Creative Commons

Soon after he was hired, the employee successfully requested a religious accommodation to use his 45-minute lunch break as part of a one-hour break to attend the Islamic congregational Jummah prayer on Friday afternoons.

When that accommodation expired in May, the employee requested an extension of the accommodation. But because daily prayer times shift slightly throughout the year based on the lunar calendar in Islam, he asked that his break be shifted to 1:30–2:30 p.m.

The DMV denied this second request, according to the employee’s complaint, as well as a third request that asked for the same accommodation.

“We cannot accommodation (sic) your request to leave during the day on Friday’s (sic) for your religious observance,” a DMV representative allegedly responded, according to the complaint. “An essential function of your position is to work certain hours. Altering your schedule poses an undue hardship on the operational needs of the office.”

The complaint also alleged that the DMV also denied a request to accommodate a change in work hours during Ramadan for the same reasons.

“When our client was hired, he was provided the accommodation for three months, and he was able to do his job without any hardship to the DMV,” Mohamed said. “Without explanation, all of a sudden, the DMV arbitrarily decided that our client was no longer permitted to have a reasonable accommodation to observe his religious practices.”

A DMV official said the office does not comment on personnel matters and that accommodation requests are considered on a case-by-case basis to avoid “undue hardships” such as inadequate staffing.

The denials were “based on improper discrimination on the basis of my religion and/or national origin,” the employee alleged in his complaint. “These actions have caused and will continue to cause great damage to me, including, but not limited to lost compensation and benefits, damage to my career and reputation; and substantial emotional distress.”

Every Friday since then, the employee has submitted a one-hour leave request to attend Jummah. Each request has been denied, according to the complaint, meaning that the employee cannot return to work to finish his shift or work his usual overtime hours after attending Jummah.

The employee also claimed his manager “threatened” that he may face consequences for “taking unauthorized lunch breaks” when clocking out of work to attend Jummah prayers.

“The DMV is forcing our client to choose between his livelihood and his religion,” Mohamed said. “Every day that goes by, our client is afraid that he will be fired for the simple act of practicing his faith. No employee, Muslim or otherwise, should be at risk of losing their job for observing their religious practices.”