(RNS) — A federal jury on Thursday (Oct. 24) convicted seven Catholic peace activists of three felonies and a misdemeanor for breaking into a nuclear submarine base in Georgia last year.

The seven now face up to 25 years in prison each for trespassing on the U.S. navy base, which houses six Trident submarines capable of carrying hundreds of nuclear weapons.

On the night of April 4, 2018, they cut a padlock and later a security fence at the Kings Bay Naval Submarine Base in St. Marys, Georgia. They spilled human blood on a Navy insignia affixed to a wall, spray-painted anti-war slogans on a sidewalk and banged on a monument to nuclear warfare with hammers made of melted-down guns.

The seven were caught more than an hour into their actions as three of the activists prepared to cut a heavily electrified fence leading to the nuclear storage bunkers.

A facilities management specialist testified in court that the expenses of cleaning and repairs totaled $31,833.

The 12 jurors, nine women and three men, took less than two hours to deliberate. The verdicts were announced shortly after 4 p.m. in the U.S. District Court for the Southern District of Georgia.

Known as the Kings Bay Plowshares 7, the group is part of a 39-year-old anti-nuclear movement called Plowshares. Inspired by the prediction of the biblical prophet Isaiah that the nations of the world shall “beat their swords into plowshares,” its activists have made a signature of breaking into nuclear weapons bases to hammer on buildings and military hardware and douse them with human blood.

The group was started by the peace activists and Jesuit priests Daniel Berrigan and his brother Philip Berrigan.

The activists, who took pictures and videos of their actions, did not deny that they had committed the acts but argued they were beholden to divine law that called them to bear witness to the immorality of weaponry that can wipe out human civilization in seconds.

“I draw a correlation with Jesus cleansing the temple,” said Patrick O’Neill of Garner, North Carolina, one of the defendants. “He did it because there was a grave injustice, like nuclear weapons.

“We cut locks and did symbolic property damage to say, ‘This is an idol.’ That display is a shrine to missiles. It is not something we should honor. It is the same as the golden calf smashed in the Hebrew Bible.”

Early in the proceedings, their lawyers said they would cite the Religious Freedom Restoration Act, a 1993 federal law that says the government may not burden the faith practices of a person with sincerely held religious beliefs. Judge Lisa Godbey Wood, however, disallowed that defense.

Nobel Peace Prize laureate Mairead Maguire, Roman Catholic Bishop John Stowe of Lexington, Kentucky, and Anglican Archbishop Emeritus Desmond Tutu of Cape Town, South Africa, were among those who signed a petition calling on the court to dismiss the charges.

Mostly middle-aged or elderly, the seven activists are residents of Catholic Worker houses, a collection of 200 independent houses across the country that feed and house the poor. In addition to O’Neill, they are Mark Colville, Carmen Trotta, Clare Grady, the Rev. Stephen Kelly, a Jesuit priest, Elizabeth McAlister, a former nun, and Martha Hennessy, the granddaughter of Dorothy Day, the Catholic activist and writer who is being considered for sainthood in the Catholic Church.

All but Kelly are out on bail. Kelly, who refused to pay $50,000 and wear an ankle monitor as conditions of his bail, remains in the Glynn County Detention Center in Brunswick, Georgia.

Sentencing is expected in 60 to 90 days.

About 150 of the defendants’ supporters from across the country attended the four-day trial or held vigil outside the courthouse. Some rented a nearby campground, sharing 12 cabins and providing lunch and dinner for those who had come for the proceedings.

At a church potluck in Raleigh, North Carolina, a week before the trial, Stanley Hauerwas, the American theologian, ethicist and public intellectual, defended their work.

“They are not nonviolent because nonviolence is a strategy to rid the world of war,” he said. “But in a world of war they cannot imagine, as faithful followers of Jesus, not being nonviolent.”

Just before the judge gave instructions to the jury, Assistant U.S. Attorney E. Greg Gilluly Jr. reminded the jurors that the religious motivations should not get in the way of their deliberations, calling such considerations “100% not important.”

Many of the Plowshares defendants said they expected the guilty verdict and were prepared for the consequences.

Said O’Neill, “Nothing meaningful comes out of life that doesn’t require sacrifice.” 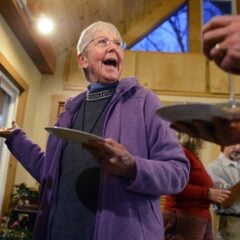 Opinion
Nuns against nuclear weapons – Plowshares protesters have fought for disarmament for over 40 years, going to prison for peace 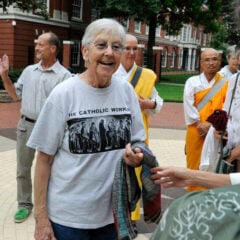