(RNS) — A conservative evangelical pastor in Tennessee posted a video of himself on social media burning a book by an atheist lawyer who argued the U.S. was not built as a Christian nation.

The book, “The Founding Myth: Why Christian Nationalism Is Un-American,” was published in May and written by Andrew Seidel, a constitutional attorney who works at the Freedom From Religion Foundation.

“I was just making my point that any history of America that would exclude God or the Bible or a pastor’s viewpoint is just really ridiculous,” Pastor Greg Locke, who founded the Global Vision Bible Church in Mount Juliet, Tennessee, told Religion News Service. “They’re doing everything they can to scrub God from the history books. It was almost as if I was saying, ‘Because you guys have decided to burn the truth of history with your revisionism, I’ll burn this book and show you what nonsense it is.’”

The Freedom From Religion Foundation, or @FFRF is actually a massive religion. Their attorney @AndrewLSeidel decided to send me a book. I decided to, well….🔥#OneNationUnderGod 🇺🇸 pic.twitter.com/XfaXfsi93S

The video, which had amassed more than 81,000 views on Twitter and nearly 87,000 views on Facebook as of Thursday afternoon (Oct. 24), followed a long back-and-forth on Twitter between Locke and Seidel over a recent FFRF advertisement.

The 30-second commercial on the separation of church and state aired during the CNN Democratic presidential debate and featured former President Ronald Reagan’s son Ron Reagan declaring himself a “lifelong atheist, not afraid of burning in hell.”

Locke reacted with a tweet calling the ad “further proof that this party HATES GOD” and claiming that the FRFF “LIED about our Founding Fathers.” When Seidel responded by offering to send the pastor a copy of his book, which argues that the personal beliefs of the Founding Fathers are irrelevant to the country’s political philosophy, Locke responded that he might sign it himself and send it back to Seidel. “I felt like this is the kind of person who actually needs to read this book,” Seidel told RNS. “He’s got this huge audience, and he’s out there telling them lies about the foundation of this country and what it is to be an American.

“I thought maybe he’d read it and we’d be able to have a public conversation about it,” he said. “But he took out a blowtorch and burned the book that I put eight years of my life into.”

Locke set the book on fire in a two-minute-long video describing atheism as “one of the fastest growing religions in the world” and claiming the book “is not factual.”

In a phone call with RNS, he declined to list any specific inaccuracies in the book, instead renewing his online challenge to Seidel to publicly debate what he called “statements that are taken wildly out of context about the Founding Fathers and the framing of the constitution.”

Watching the video evoked “a very strange feeling that’s hard to put into words,” Seidel said. “It’s a mixture of that revulsion and horror that any thinking person feels when they see a book being burned, mixed with the morbid curiosity of the rubbernecker — plus a sort of pride that the ideas in my book are so threatening to him that he couldn’t even begin to engage with them.”

Ironically, Seidel said, his book included a section on how some religious groups use book burnings and banned books as “built-in defense mechanisms to avoid the threat of new information.”

In the video, Locke also read out the inscription Seidel had handwritten in the copy he sent Locke, urging the pastor to “read something other than your bible. Life is too good to waste on bad ideas.”

Locke, who said he had already decided not to read the book before he received it, told RNS that Seidel’s inscription was “trashy.” 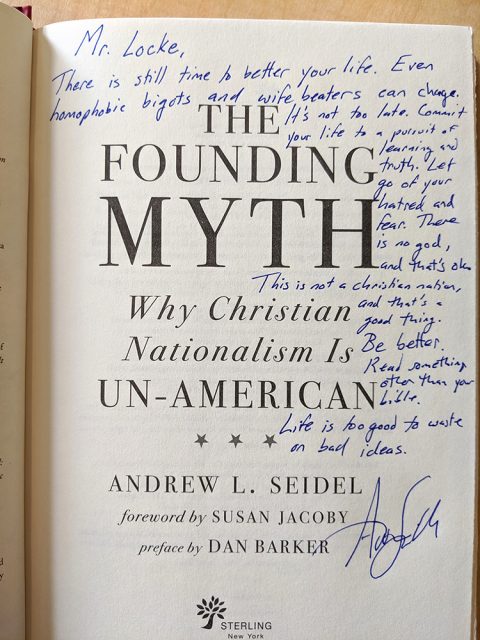 Seidel admitted to getting “cheeky” with the inscription, which he said was a “genuine” message inspired by the several Bibles with heartfelt inscriptions he has received over the years. But, he said, Locke’s video seemed to make any other attempts at dialogue useless.

Instead, Seidel said he was considering responding with a book drive to donate banned books to libraries.

“Seeking out any sort of rational conversation with somebody who prefers burning books to reading them seems like a nonstarter,” he said. “It’s very clear he didn’t crack open a page beyond the inscription before burning it. I don’t know how fruitful it would be to pursue conversation with a gentleman like this.”

Locke, a strong supporter of President Donald Trump who describes himself online as an “outspoken pastor that refuses to bow to the politically correct idol of our culture,” drew online attention in 2016 when he uploaded a viral video rebuking Target’s gender-neutral bathroom policies. The video, which claimed the policy “opens the door for perverts and pedophiles,” received more than 18 million views.

Locke now boasts around 1.5 million Facebook likes, more than 47,000 Twitter followers and more than 24,000 subscribers on YouTube. He also has a fledgling presence on the social media app TikTok, popular among teens.

Last year, the pastor disputed allegations that he abused his ex-wife, who he claims has a mental illness, and married his church assistant shortly after his divorce.

Locke said he has received hundreds of emails from people thanking him for burning the book and inspiring them to buy the book for their local libraries.
“Basically, the Streisand effect,” he said. “There’s a groundswell of people who are going to read the book now, which is fine. It doesn’t matter.”
Share
Tweet
Share