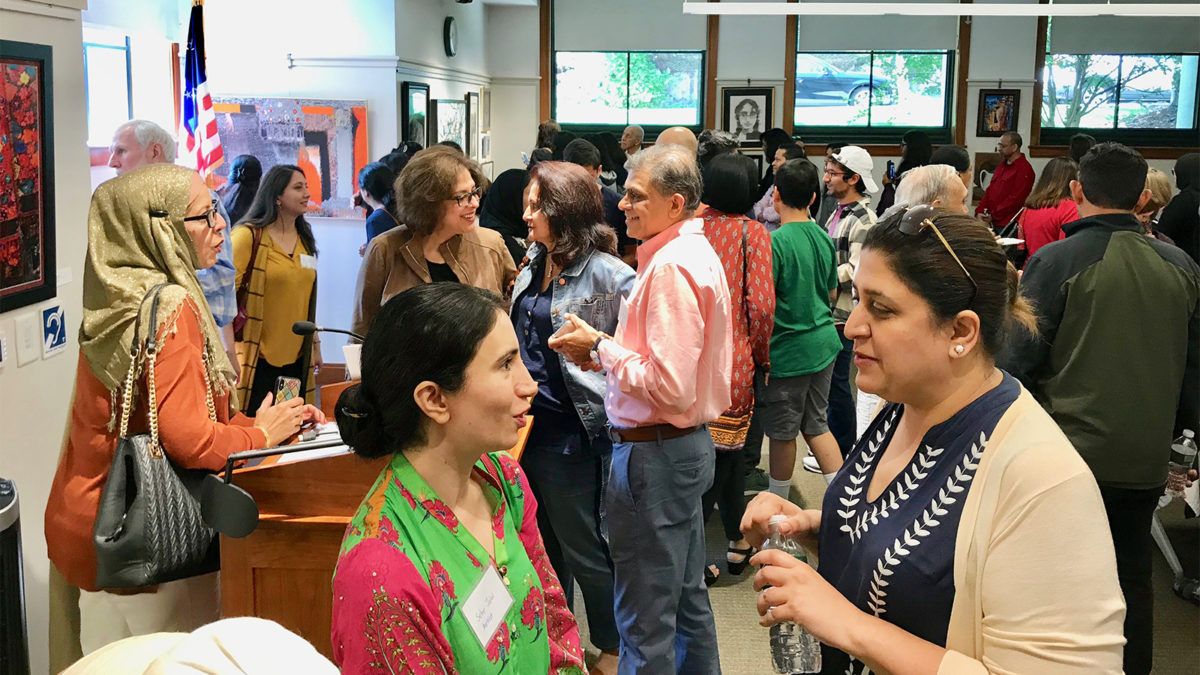 Debut of the “More Than My Religion” exhibition at the Cary Library in Lexington, Mass. Photo courtesy of Irum Haque
October 25, 2019
Aysha Khan

BOSTON (RNS) — Next week, the Massachusetts State House in Boston will house a collection of artwork by 24 Muslim artists from the Midwest to Massachusetts.

The artwork is part of the annual art series “More Than My Religion,” now in its fifth year, a project organized by New England Muslim artists to reflect American Muslims’ multifaceted identities beyond their religious practice.

“We’re focusing on American Muslims because their narrative has been the most hijacked,” said organizer Irum Haque, a pastel artist in Westford, Massachusetts. “We want to reclaim who we are and tell our own real stories. And every art piece that hangs in the exhibition is the story of a human life as American Muslim citizens.”

The pieces debuted last month at the Cary Library in Lexington, Mass., and will be displayed at the State House until Nov. 3. Sen. Edward Kennedy and Rep. Mike Connolly will speak at the Oct. 28 public reception, which will also include a Q&A session with some of the featured artists. 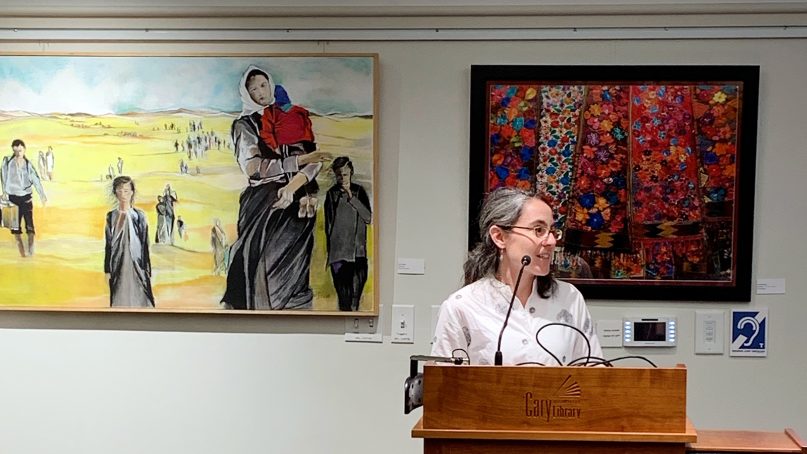 Laura Weinstein speaks at the Cary Library opening of the “More Than My Religion" exhibition in Lexington, Mass. Photo courtesy of Irum Haque

This year’s exhibition was juried by Laura Weinstein, curator of South Asian and Islamic art at Boston’s Museum of Fine Arts, which re-opened its extensive Arts of Islamic Cultures gallery over the summer. 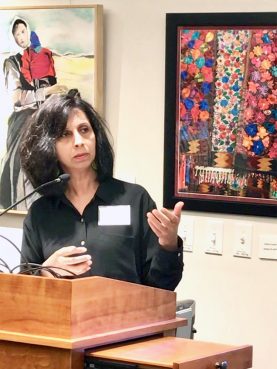 The project started as a conversation about the portrayal of Muslims almost exclusively in religious terms between Haque and co-organizer Ehsun Mirza, a photographer and painter who works as the chief of medicine and director of the ICU at Kent County Hospital in Warwick, Rhode Island.

Neither are formally trained as artists — Haque has a day job as an educator specializing in language-based disabilities. But the friends, both of whom are Pakistani immigrants, have long been involved in New England’s interfaith scene.

“We’re making a platform to bridge people together rather than being afraid of the other and who the other communities are,” Haque said. “This is a place for communities to come together and connect over art and really to be pleasantly surprised that there is so much in common.”

The group’s first exhibition was hosted at Providence City Hall in Rhode Island, with the city’s mayor, Jorge Elorza, speaking at the reception about the importance of such community art projects to combat Islamophobia.

Part of the “More Than My Religion” exhibition at the Cary Library in Lexington, Mass. Photo courtesy of Irum Haque

Since then, the show has been displayed at The Providence Athenaeum, the Multicultural Arts Center in Cambridge, Mass., and the Rhode Island Council of the Arts. Previous jurors include John Smith, director of the Rhode Island School of Design Art Museums, as well as Jill Brody, a prominent Rhode Island photographer.

Artists whose work is sold at the exhibition are encouraged to donate a portion of the proceeds to local charities.

In the future, Haque said, she hopes to launch an interfaith art exhibition.

“No matter which background, race, ethnicity you belong to, ultimately human life and human values are shared,” she said. “Ultimately it’s about bringing walls down.”