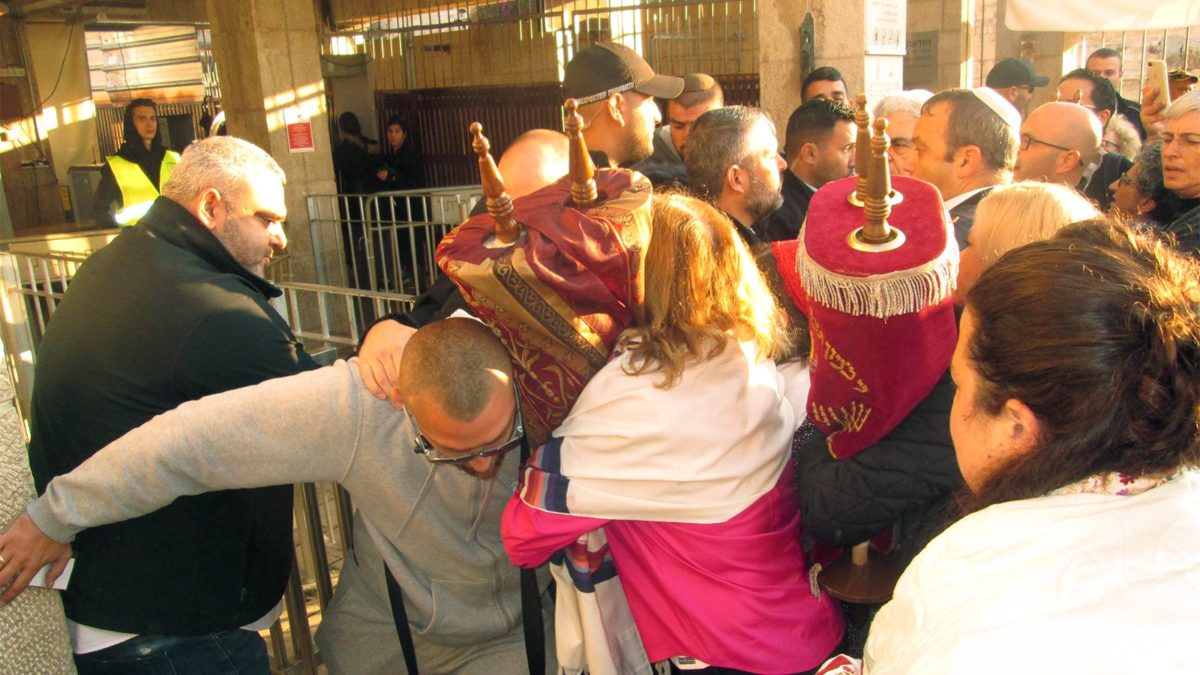 JERUSALEM (RNS) — Women of the Wall, a controversial Jewish pluralistic women’s prayer group that has long fought for the right to pray in the women’s section of the Western Wall using a Torah scroll, has faced a daunting amount of backlash from fervently religious Jews who see the Western Wall as a strictly Orthodox synagogue.

During the 31 years the group has existed, some ultra-Orthodox Jews have thrown rocks, eggs and water bottles, cursed and spat at the women, many of whom pray in prayer shawls, kippot and phylacteries — ritual items once reserved only for men.

But the group and its mostly American supporters were still shocked when a prominent Jerusalem official recently called on the Orthodox public to drown out Women of the Wall during its monthly prayers Wednesday (Oct. 30).

In what is believed to be the first instance of an Israeli government official calling on the public to oppose Women of the Wall, Jerusalem Chief Rabbi Shlomo Moshe Amar addressed a letter to Orthodox women urging them to pray at the Western Wall on Wednesday morning “to prevent blasphemy” by the feminist group.

According to the undated letter, Amar took action after several Orthodox woman complained that Women of the Wall uses loudspeakers in the women's section. They also claimed that security teams at the entrance to the Western Wall do not conduct “the strict inspections to which (other) women are subjected.”

If the inspections were thorough, the Orthodox women argued, Women of the Wall would not have been able to smuggle small Torah scrolls into the women’s section on several occasions.

The group has attempted to smuggle in Torahs “because by law we are allowed to pray with a Torah according to the courts, but we can’t bring one in,” Lesley Sachs, the Women of the Wall’s former executive director, noted as the group walked toward the Western Wall’s main security entrance Wednesday, when Jews celebrated the start of a new month on the Jewish calendar.

Although many modern Orthodox congregations permit women to read from a Torah scroll in women’s-only prayer services, ultra-Orthodox Jews consider the practice, as well as the use of traditionally men’s ritual items, sacrilegious.

“Move to Tel Aviv! Go back to America! This isn’t your place. You are garbage. You have the face of a pig,” a middle-aged ultra-Orthodox man shouted as Women of the Wall defiantly tried to bring five small Torah scrolls through the Wall’s main security gate. 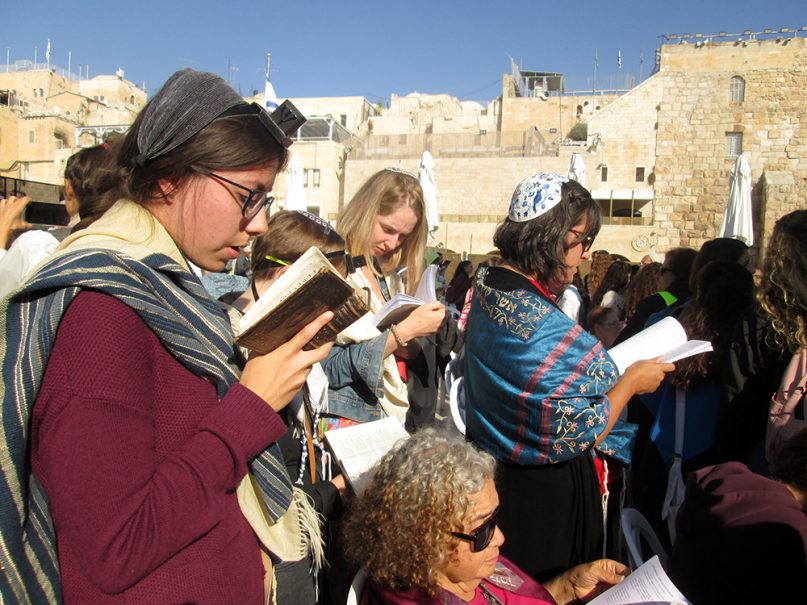 Some members of Women of the Wall don prayer shawls and tefillin while praying at the Western Wall on Oct. 30, 2019, in Jerusalem. Ultra-Orthodox Jews say it is sacrilegious for women to wear these ritual items that are traditionally used by men only. RNS photo by Michele Chabin

The chief rabbi of the Western Wall does not allow anyone, male or female, to enter with a Torah scroll. He provides 300 Torahs on the men’s section of the wall, but none on the women’s side.

After scuffling with security personnel, Women of the Wall members were allowed to enter following a thorough security check after those who were holding the Torahs retreated.

Once Women of the Wall began praying communally and out loud in the center of the Wall’s women’s section, schoolgirls as young as 11 and 12 tried to disrupt the prayers by edging up to the group as a line of female security guards stood by. Dozens of boys and men shouted at the worshippers from the plaza behind the women’s section.

A loudspeaker from the men’s section also tried to drown out the group’s prayers.

“This is God’s house and I’m here to sanctify God’s name by protesting these people,” said a yeshiva student who gave his name as Dovid. He had come to the Wall largely due to Amar’s letter.

“These women have come to our holy site and are defiling the Torah and tefillin, which must only be used by men,” one girl said. “These are Reform,” the second girl said, uttering “Reform” as if it were a curse.

Leah Zakh Aharoni, an Orthodox activist who co-founded the similarly named but quite different Women for the Wall, which opposes pluralistic prayer in the women’s section, told Religion News Service that her group discussed Women of the Wall with Amar in recent weeks. He wrote the letter “in support of our work” soon afterward, she said.

Aharoni said it was leaders from Women of the Wall and the Reform movement who “chose to stand off with the police and disturb the prayers. We call on these organizations to join the prayer services and accentuate what unites us instead of pushing for conflict at Judaism's most sacred site."

Yochi Rappeport-Zierler, Women of the Wall’s director, said the group decided to openly try to bring Torahs into the women’s section on Wednesday after top rabbis “lied about us, accusing us of storing Torahs in a bathroom. This time we wanted them to see us coming."

Rabbi David Saperstein, director emeritus of the Religious Action Center of Reform Judaism, supported the group from the plaza behind the women’s section. He called it a “tragic irony that Amar, a rabbi, would mobilize people to prevent other Jews from praying.”

Anat Hoffman, Women of the Wall’s chairwoman, believes Amar’s letter shows that the Orthodox establishment fears the change her organization and the nonliberal streams are trying to achieve.

“Look, we are challenging a mighty monopoly and we should expect resistance. They stand a lot to lose.”

If Women of the Wall and the Reform and Conservative movements “succeed in showing Israelis that there is more than one way to pray and receive religious services at the Wall, the idea of choice in religion in every sphere may take root,” Hoffman said.

“There is more than one way to convert, to be buried, to observe kashrut, to get married or divorced. The engine is moving forward from the Wall. We are the catalyst.”

Related Posts
By Julia Lieblich, Luc Vachez
France’s ‘hip’ female rabbi draws Muslims, Christians and Jews in a time of crisis
By Jeffrey Salkin
How Judaism became caffeinated
By Claire Giangravé
Vatican reiterates two-state solution as Israeli-Palestinian relations escalate
By Joseph Krauss
'GOD TV' spat exposes tensions between Israel, evangelicals
By Scott Jones
Before we get ‘back to normal,’ we need to grieve and pray