(RNS) — A group of Latina Muslims in San Diego is raising money to build a shelter across the border in Tijuana, Mexico, to not only assist the surge of migrants there but also to help those who are deported from the United States.

“There’s a lot of need not just with immigrants but with people who are deported,” said Sonia Garcia, founder of the Latina Muslim Foundation.

The foundation, a nonprofit based in San Diego, had raised more than $30,000 by Thursday afternoon through its LaunchGood page to purchase a warehouse it plans to convert into a shelter. The shelter will help people of all faiths and will have a special focus on migrant and deported women with children.

Garcia estimates it will cost about $250,000 to open the warehouse as a shelter. That includes cleanup, adding furniture and appliances, and building another level to the structure. Before planning to open the shelter, the group had already volunteered for about two years at other Tijuana shelters where members would donate shoes, clothing, books and other school supplies. 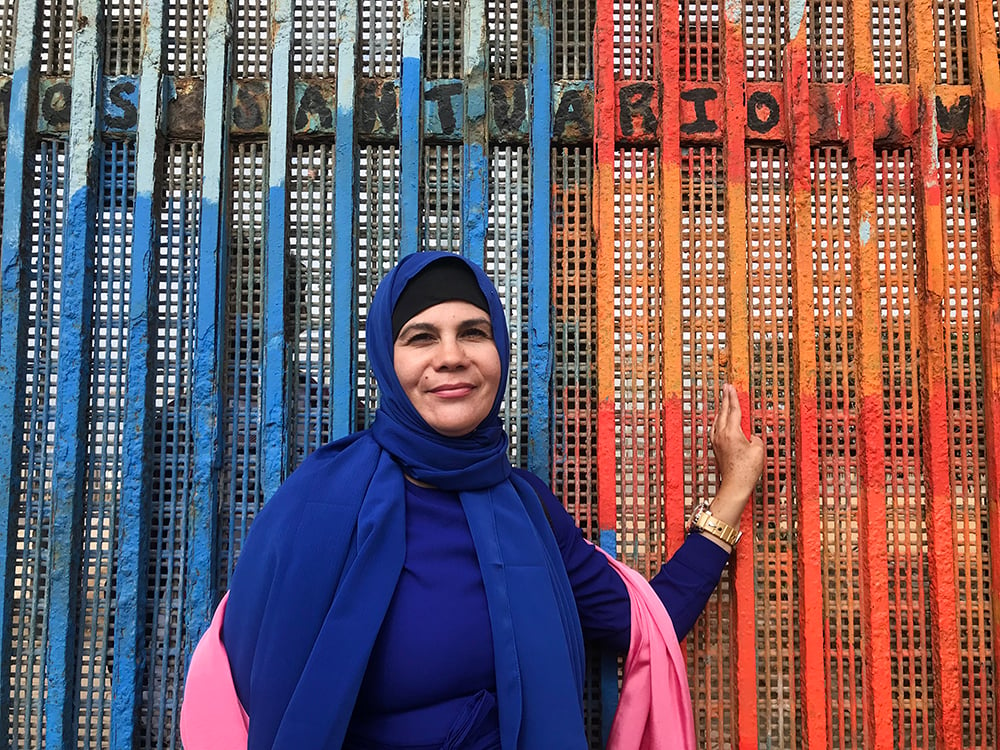 Sonia Garcia is the founder of the Latina Muslim Foundation, a nonprofit that wants to open a shelter to help migrants and deportees in Tijuana. In the photo, Garcia stands at the U.S.-Mexico border in Tijuana on Oct. 27, 2019, when she participated in a prayer to raise awareness of migrants in the area. RNS photo by Alejandra Molina

Garcia envisions hosting workshops teaching young deported people from the U.S. how to better their Spanish. She intends to hold classes for migrants or deportees to learn trades like hairdressing or tailoring. For migrants seeking refuge, Garcia said they can stay at the shelter and volunteer to cook and clean, as well as enroll in workshops. Garcia said they already have volunteers lined up.

For Garcia, it’s important for migrants and deportees in Mexico to feel empowered despite not being in the U.S.

Tijuana has been described in news reports as the “waiting room” for migrants seeking to claim asylum in the U.S. Many are from Central America, but they’re also from Cameroon, Haiti and other countries. Additionally, the city receives thousands of U.S. deportees annually, according to The San Diego Union-Tribune. In 2017, more than 32,000 deportees were sent back through Tijuana, the newspaper reported. The city is also home to an established Muslim community, with the Islamic Center of Baja serving people in the area.

Garcia wants deportees to realize that “Mexico is big. It can give you a lot.”

For migrants and asylum-seekers, she wants to help them find work while they wait in Mexico and decide their next steps.

“It’s good to help and give to people, but it’s better to prepare people to have some kind of future,” Garcia said.

Although the shelter will be open to people of all faiths, it will also cater to Muslims in the area. Muslims gather in midday prayer for “Pray Beyond Borders” on Oct. 27, 2019, along the U.S.-Mexico border in Tijuana. RNS photo by Alejandra Molina

“There are Muslims who do not feel safe in the shelters they were staying at because they were being discriminated against (for) their faith,” said Mayte Gutierrez, a volunteer with the Latina Muslim Foundation.

Gutierrez said some Muslims who are from other countries would not eat because they were unsure if specific foods were cooked with lard. Under Islamic law, Muslims cannot eat pork.

Seeing the need of Muslims in Tijuana, the women plan to have a designated space at the shelter for Muslims to be able to pray five times a day, as well as classes on Islamic studies and the Quran.

As Latina Muslims, Gutierrez said they can relate to migrants across the border “because our families migrated here to America.”

“We saw the need to do something because we want our Muslim brothers and sisters to know and feel that Mexico is a place of opportunity as well.

“We are there to help them whether they choose to remain in Mexico or seek asylum in America,” Gutierrez said.