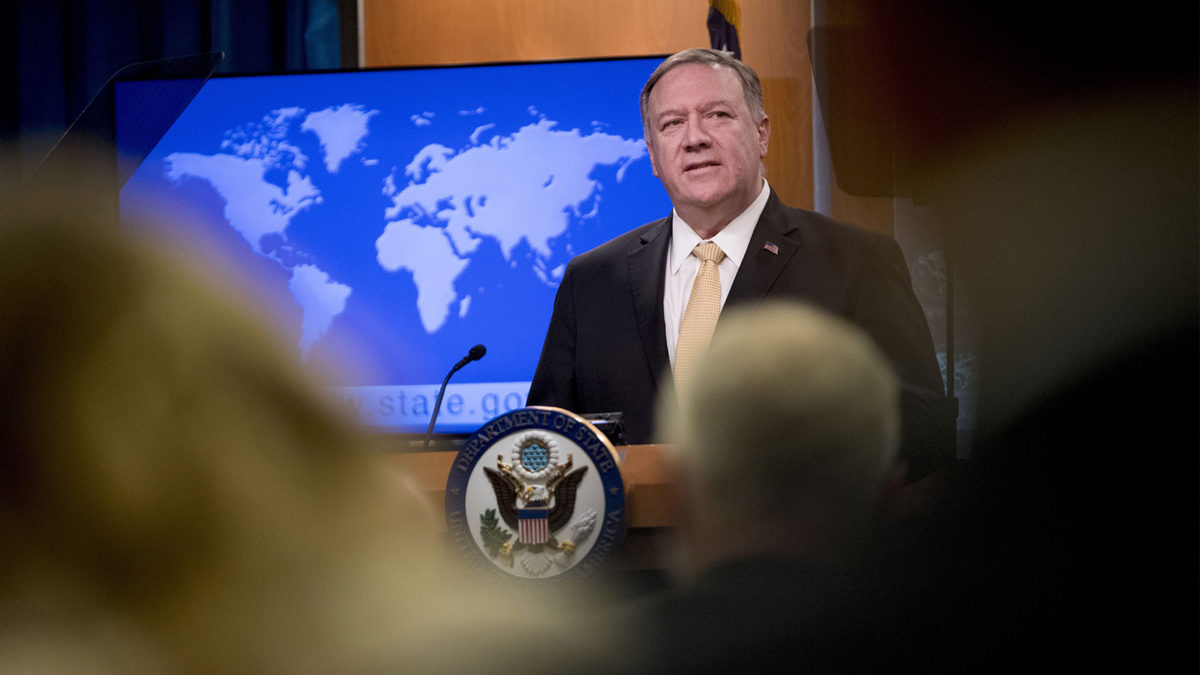 Speaking to reporters during a press conference, Pompeo said the reversal of the decades-old position “recognized the reality on the ground.” Pompeo added that he sees the settlements as "ill-advised" — a term once used by Ronald Reagan — rather than illegal "per se."

The decision was met with mixed reactions from religious leaders and faith-based advocacy groups.

Mike Evans, founder of The Jerusalem Prayer Team and a member of Trump’s informal group of evangelical Christian advisers, praised the move. In an interview with Religion News Service, Evans said Pompeo called him shortly after the press conference while en route to meet President Trump.

“I told (Pompeo) it was a tremendous answer to prayer from evangelicals,” he said, asking the secretary of state to express gratitude to the president.

Evans said in a separate statement that the announcement was on par with the administration’s decision to recognize Jerusalem as Israel’s capital. He told RNS it reminded him of a passage from the Biblical book of Genesis in which God refers to Israel by saying, “I will bless those who bless you, but I will curse those who curse you.”

“In our opinion, it’s recognizing the Bible as legal,” said Evans, who also plans to expand his Friends of Zion Museum in Jerusalem to include an exhibition dedicated to Trump. “They’re saying it’s true.”

Evans, who calls himself “the Israel guy” among Trump’s evangelical advisers, said Pompeo offered to have dinner with his wife.

The State Department did not immediately return requests to confirm the call or corroborate Evans' account.

Paula White, a Florida pastor who was recently tapped to head the White House's Faith and Opportunity Initiative, said in a tweet that "as Evangelicals and supporters of Israel we applaud this bold and correct move."

As Evangelicals and supporters of Israel we applaud this bold and correct move. https://t.co/sfFGBWV54s

Christians United for Israel, a conservative Christian group that claims to be the “largest pro-Israel organization in the United States,” also lauded the administration's rejection of the 1978 legal opinion, which is also called the Hansell Memorandum.

“CUFI did not agree with the Hansell Memorandum’s conclusion and we welcome its revocation,” the tweet reads. “Our policy of not taking a position on final status issues remains unchanged."

The American Israel Public Affairs Committee did not directly praise the administration's decision, declaring in a tweet that their organization does not take a position on settlements. The same tweet added that AIPAC "believe(s) settlements should be an issue for direct negotiations between the parties, not something determined by international bodies."

Other religious groups condemned the move as a significant obstacle that could imperil any potential peace deal.

Rabbi Rick Jacobs, head of the Union for Reform Judaism, issued a statement urging the Trump administration to reverse course. He said that while Pompeo's announcement was focused on international law it "will be widely read as a broader change to the U.S. position on Israeli settlements" and will cause "long-term threat to Israel’s status as a Jewish and democratic state."

“By discarding decades of bipartisan US policy and flagrantly disregarding international law, they are trampling on the rights of Palestinians and helping the Israeli right-wing to destroy Israel’s future as a democratic homeland for the Jewish people,” the statement reads.

Widespread discomfort with Israeli settlements in the region dates back to at least 2013. That year, a Pew Research survey found that only 17% of American Jews believed the continued building of settlements in the West Bank is helpful to Israel’s security. By contrast, 44% said that settlement construction hurts Israel’s own security interests.

Bernie Sanders — one of only two major presidential candidates who are Jewish — weighed in on the decision via Twitter.

“Israeli settlements in occupied territory are illegal,” he tweeted. “This is clear from international law and multiple United Nations resolutions. Once again, Mr. Trump is isolating the United States and undermining diplomacy by pandering to his extremist base.”

A representative from the National Council of Churches, which operates on behalf of 38 Christian groups that collectively claim roughly 45 million people, told RNS via email that it “stands by its long-stated position that the Israeli settlements in the West Bank are clear violations of international law.”

The NCC questioned Pompeo’s assertion that the announcement would “increase the likelihood” of a peace deal in the region.

“For the Trump Administration to assert falsely and unilaterally that these illegal settlements are now legal is to hasten the end of any hope for a two-state solution, or possibly any other peaceful solution, and will put lives in danger,” reads NCC’s statement.

The Presbyterian Church (USA)'s Office of Public Witness called the rejection of established policy "yet another occasion where the Trump administration is disregarding international law," arguing it will make things worse for denizens of the West Bank.

"These actions do not help Israel be more of a democracy for all the people it controls," a representative for the PC(USA) Office of Public Witness wrote in an email. "They are only likely to intensify the dispossession and oppression caused by the settlements and escalate an already tragic situation."

The Council on American-Islamic Relations decried the decision as well, saying in a statement that if the administration continues to deny that settlements are a violation of international law, then “the two-state solution is officially dead, and Donald Trump dealt the death blow.”