MALIBU, Calif. (RNS) — A few hours after Jim Gash’s inauguration this fall as Pepperdine University’s eighth president, his wife, Joline, showed up at her husband’s fourth-floor executive suite with a Ugandan medical student.

Tumusiime Henry, 26, had flown nearly 10,000 miles to help celebrate Jim Gash’s unlikely ascension to the top post at the 7,900-student university, which is associated with Churches of Christ.

Henry wore a black suit with a red plaid bow tie as he joined the Gashes in an office overlooking the Pacific Ocean — a postcard-perfect view flanked by Pepperdine’s 125-foot-high monumental cross on one side and a smaller cross atop the stained-glass Stauffer Chapel on the other.

At the inauguration festivities earlier that morning, Henry had sat in the front row as a special honored guest among the thousands of students, dignitaries and faculty members dressed in academic regalia. 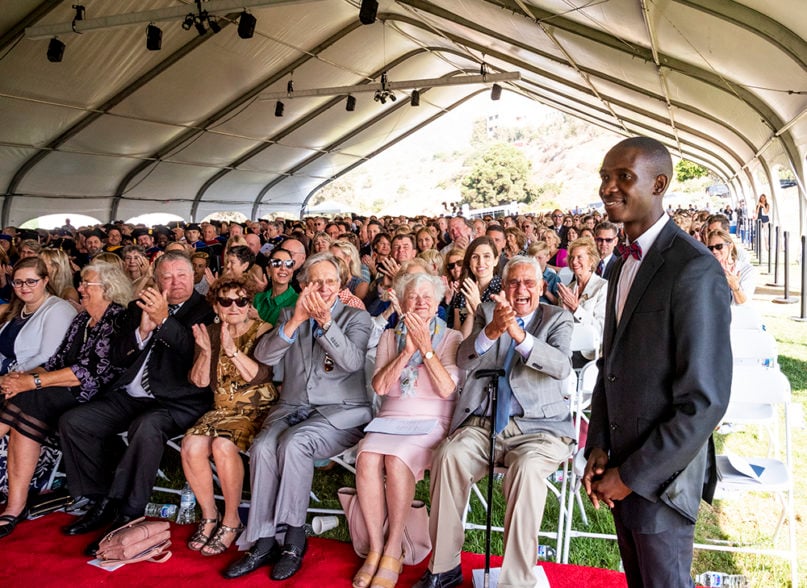 The crowd gives Tumusiime Henry a warm welcome at the inauguration of Jim Gash as the eighth president of Pepperdine University in Malibu, California. Photo by Ron Hall

As Jim Gash, 52, will tell anyone who will listen, he never would have become president if he hadn’t met Henry.

“It’s all due to this young, brave man next to me,” Gash said of Henry — the nickname by which the aspiring ophthalmologist is known in Uganda, an East African nation that doesn’t have family surnames.

Jim Gash had a life he loved in Malibu, a coastal community about 35 miles northwest of Los Angeles. When the Pepperdine law professor reluctantly joined a global justice trip to Uganda a decade ago, he had no intention of ever going back.

“I was very interested in somebody helping there, but it wasn’t going to be me,” he said. “I went once … to show my wife and my kids and my God that I was willing to take a step of faith.”

Three years earlier, Pepperdine law students had started traveling to Uganda, prompted by a speech by Bob Goff, founder of a nonprofit organization called Restore International, now known as Love Does. Goff had spoken at Pepperdine in 2007 and planted the seed for the first trips. In 2009, Goff again touted Uganda while addressing a Christian Legal Society meeting that Gash attended in San Diego. 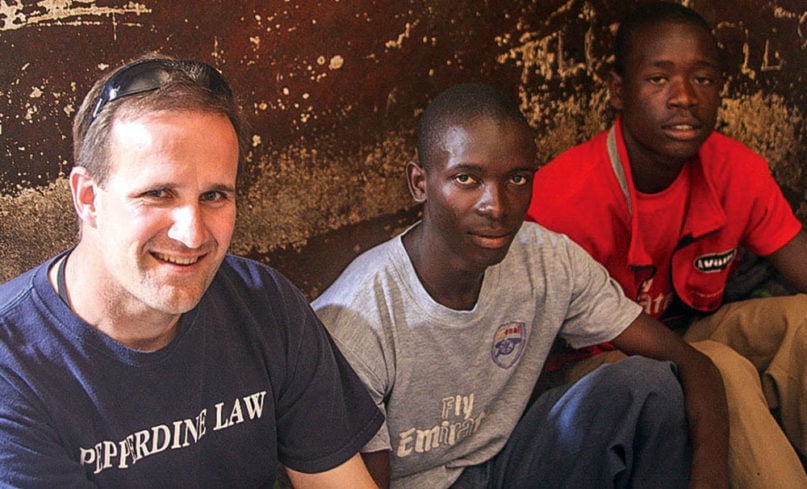 Finally, Gash gave in. His January 2010 trek was going to be “my one-and-done, my ‘volun-tourism’ trip,” the father of three said.

But then Gash arrived at a juvenile prison called Ihungu — in the rural district of Masindi in western Uganda.

“I remember walking into that prison. It was a one-room warehouse with no electricity, no running water,” Gash said. “I just remember thinking, ‘This isn’t OK with me.’” 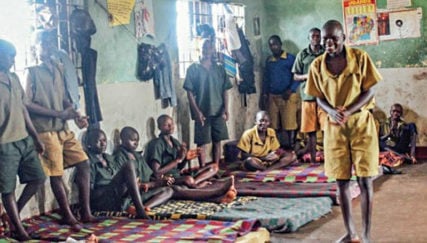 Boys at the Mbale juvenile prison during one of Jim Gash’s legal aid trips to Uganda. Photo courtesy of Jim Gash

At the prison 130 miles northwest of the capital of Kampala, Gash met Henry, then a teenager.

The 5-foot-4, 120-pound boy was clad in sweatpants, flip-flops and a blue T-shirt. He had spent a year and a half in custody on false charges of murder. While Henry was at school, villagers had attacked a former herdsman who stole money from the boy’s family. They dumped the man’s body at the family’s home. Henry, his brother Joseph and their father, who since has died, were implicated despite no evidence against them.

While at Ihungu, Henry also had been charged with a second murder — again bogusly — when a prisoner ordered beaten by an adult taskmaster died.

Suddenly for Gash, injustice had a name and a face.

“It changed my life’s trajectory,” said Gash, who has made more than two dozen trips to Uganda. 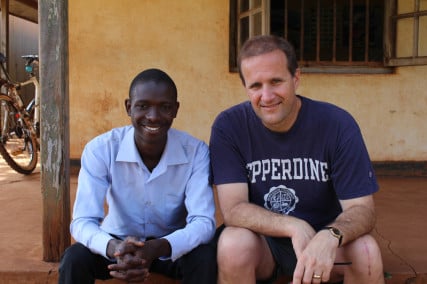 Gash’s extreme love and care for people are contagious, as evidenced by the relationships he has built in Uganda, said Goff, who participated in the inauguration activities.

“He’s trying to make everything about the power of Jesus Christ unleashed in the world in beautiful ways,” Goff said of Gash, who served for eight years as an elder of the University Church of Christ on the Pepperdine campus. “(But) he’s not out there as an evangelist. He knows what he believes, he knows why he believes it, and he lets love do the talking.”

For Henry, meeting Gash was an answer to prayers.

“I remember that I had actually fasted and prayed for somebody to come and do something, and I was just waiting,” said Henry. “I was very happy to meet him.”

Because of limited judicial resources, those charged with a crime often spent years in custody waiting for their case to be heard.

Eventually, the murder charge against Henry, his brother and father were dismissed. However, Henry remained in custody on the second charge despite his claims of innocence and was eventually convicted of murder.

A judge sentenced Henry to 12 months of probation and released him. 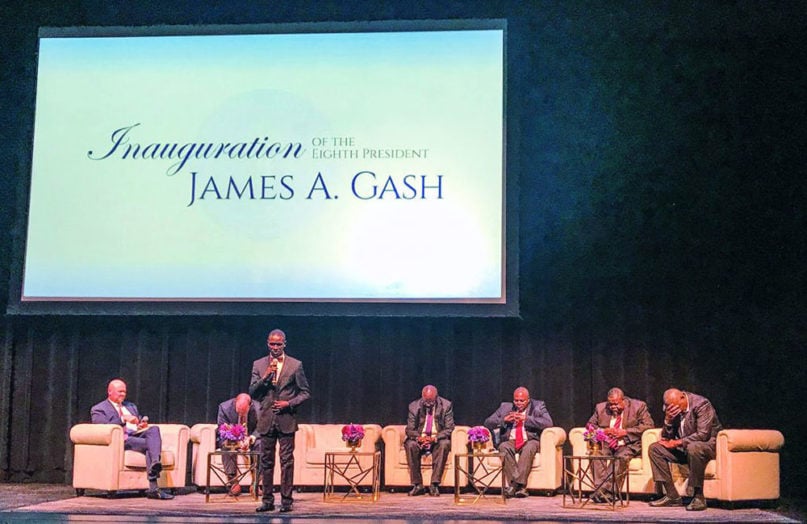 Tumusiime Henry prays during a panel discussion on “Pepperdine’s Quest for Justice: Spotlight on Reform in Uganda,” hosted by the law school on the night of Jim Gash’s inauguration. Photo by Bobby Ross Jr.

Gash, who became director of Pepperdine’s global justice program, took over the appeal of Henry’s conviction.

At the same time, he also began working with Ugandan authorities to reform the country’s judicial system. Numerous Ugandan judges traveled to Pepperdine to work with legal experts on matters such as developing a plea-bargaining system for their country.

In January 2012, Gash took a six-month sabbatical from Pepperdine. He, Joline and their children — Jessica, Joshua and Jennifer — moved to Uganda. While Gash focused on judicial reform, his wife and children worked with a mobile medical clinic. 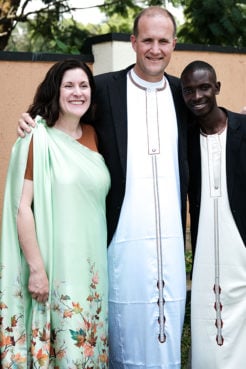 Joline and Jim Gash wear Ugandan attire as they join Tumusiime Henry at his wedding. Photo courtesy of Joline Gash

“When we decided to move out there, Henry became a part of our family,” Gash said. “Our kids instantly fell in love with him, and Joline became a second mom to him.”

The whole experience, Joline Gash said, let the family “step out in faith.”

“Sometimes, God needs to take you somewhere very far and remote and quiet to tell you what he needs you to do,” Joline Gash said.

In summer 2015, seven years after Henry’s nightmare began, the appeals court finally ruled in his case, striking down the conviction.

Jim Gash called to deliver the news via Skype.

“It’s over! You won!” Gash told Henry. “So no longer are you someone who has been convicted of a crime — the whole thing was nullified. It’s like it never happened.”

Henry first traveled to the U.S. in 2016 after the release of Gash’s book “Divine Collision: An African Boy, an American Lawyer, and Their Remarkable Battle for Freedom,” which recounts the conversation after the appeals court’s decision.

The ex-prisoner returned to America in 2017 to promote “Remand,” a Revolution Pictures documentary about the relationship between Gash and Henry as well as Pepperdine’s work on judicial reform in Uganda.

The night of the inauguration, the law school showed “Remand,” followed by a panel discussion on “Pepperdine’s Quest for Justice: Spotlight on Reform in Uganda.” Katureebe said Uganda’s judicial system has benefited from the partnership with Pepperdine.

Bamwime voiced appreciation “for the project that Jim Gash and friends launched in our country.”

Gash told audience members during the panel that his work in Uganda set him on the path to become president of Pepperdine.

After joining the faculty in 1999, Gash served as the law school’s first dean of students under former Dean Kenneth Starr. Later, under Dean Paul L. Caron, he became associate dean for strategic planning and external relations.

Gash’s work in Uganda impressed Pepperdine’s regents — and others on campus, too.

“Jim’s work for justice in Uganda made him a strong candidate and makes for a good connection with the students,” said Eric Wilson, an associate chaplain at Pepperdine.

Pepperdine has six international campuses — from Buenos Aires, Argentina, to Shanghai, China — where students study abroad. Gash would like to expand that reach to the developing world.

Uganda, the new president said, “gave me a global vision of what was possible on this planet. Jim Gash speaks at his inauguration as the eighth president of Pepperdine University. Photo by Ron Hall

(Bobby Ross Jr. is editor-in-chief of The Christian Chronicle, where this story first appeared. The original version of this story can be found here.)